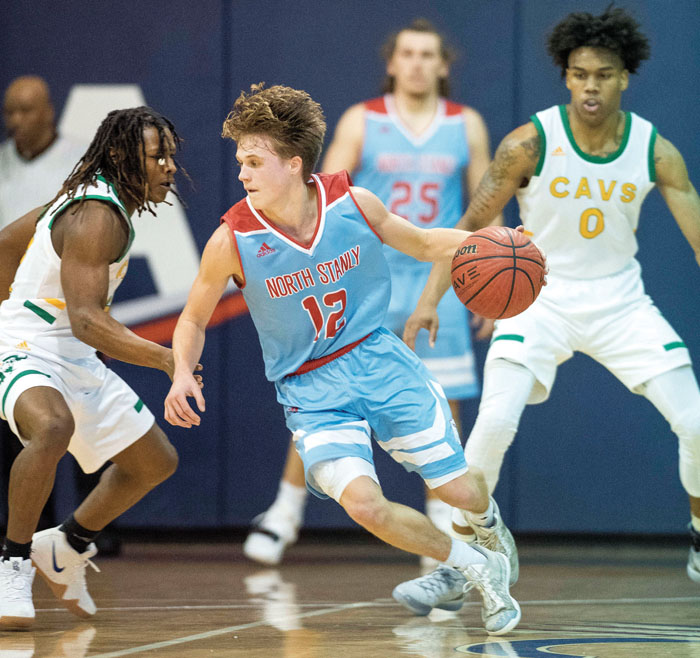 SALISBURY — North Stanly guard Bryson Childress poured in 34 points against a North Rowan defense designed exclusively to contain him and led the Comets to a 61-50 victory on Saturday.

Childress put on a show in the third-place game in the Dale’s Sporting Goods/Sam Moir Christmas Classic, played in Goodman Gym on Sam Moir floor.

No one in the tournament had closer ties to the legendary Moir, who passed away in October, than North Stanly coach Paul Childress and his son Bryson.  Paul’s father and Bryson’s grandfather, Tom Childress, came down from Mount Airy to play on Moir’s first team at Catawba in 1960. Tom went on to coach at Pfeiffer, as Moir’s friendly rival, and the Childress family grew up in Stanly County.

“I can’t begin to tell you what an honor it is for us to compete in a tournament dedicated to Sam Moir,” Paul Childress said. “We appreciate that the Rowan County ADs let us play, and this was very special for us. Our family was very close to Coach Moir.”

Bryson Childress hasn’t signed yet, although he is weighing a number of offers from Division II schools and is still being recruited by several mid-major Division I programs. The knock on him is size — he’s a mere 5-foot-10 and 145 pounds — but he combines extraordinary shooting ability with exceptional quickness and ball-handling skills. He’s a handful, as a rotating committee of athletic North Rowan defenders found out.

If you want someone to compare Childress to, think vintage Mark Price from his Georgia Tech/Cleveland Cavaliers days.

“Bryson is a good player,” said North Rowan’s Derrick Page, who led the Cavaliers with 12 points. “You can’t give him any room at all.”

Childress wasn’t getting many shots early, and second-seeded North Rowan (7-2) looked dominant. With Brevin Goodlett and Cooke scoring six points apiece, the Cavaliers took a 24-11 lead after a quarter.

North Rowan led by as many as 16 points in the second quarter, but momentum started turning when Childress banked in a 3-pointer from an impossible angle to end the first half. That shot trimmed North Stanly’s deficit to 35-22.

“Did I mean to bank it?” Childress said with a laugh. “Tell everyone that I did.”

Fifth-seeded North Stanly (5-4) had also dug a hole in the second round against unbeaten Davie County, and while the Comets made a great charge, they couldn’t fight all the way back. That’s why they were playing for third place on Saturday.

“But at least we’d been there in that situation, and we knew we could rally,” Coach Childress said. “I’m not sure why we started so slow again. Everyone we play against uses some kind of junk defense against us, a box-and-one against Bryson or a triangle-and-two against Bryson and Carson Lowder. We know how to deal with it. We know what we need to do.”

The game swung hard and suddenly, mostly because Childress, who had scored 13 points on nine first-half shots, got some help as the second half began. Cooper Hogan, scoreless the first 16 minutes, got back-to-back buckets. That triggered a fierce North Stanly run, spearheaded by Childress and 6-foot-7 Nalik Veasley. Childress tied it at 41-all with a darting jumper, and used a tough screen set by Garrett Clark to spring open for the 3-pointer that put the Comets ahead, 44-41.

When Clark rebounded a Childress miss for a stick-back, the Comets led by five points after three quarters.

Once it had the lead, going to the fourth quarter, North Stanly was able to use the clock and Childress’ ball-handling skills to its advantage. Eventually, North Rowan had to chase and foul. Childress is automatic at the line, and Lowder and Veasey also made some free throws as the Comets won, going away.

“Veasey played a great game,” Bryson Childress said. “I took some bad shots tonight, but he rebounded a lot of them.”

After trailing, 33-17, in the second quarter, North Stanly outscored the Cavaliers, 44-17, the rest of the way.

After nice starts, Cooke and Goodlett settled for 11 points each, but most of North’s issues were on the defensive end.