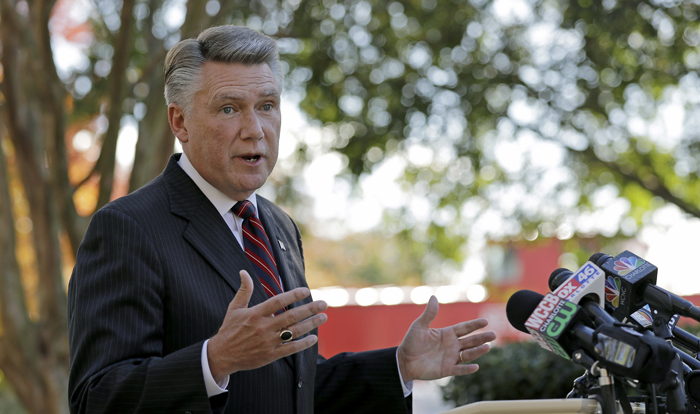 Republican Mark Harris speaks to reporters during a news conference in Matthews in November. The N.C. board investigating allegations of ballot fraud in the unresolved 9th District congressional race between Harris and Democrat Dan McCready was disbanded Friday. Chuck Burton/Associated Press

RALEIGH — The dissolution of North Carolina’s elections board Friday injected further uncertainty into a still-undecided congressional race as a U.S. House Democratic leader rejected the idea of filling the seat until an investigation of ballot fraud allegations is complete.

Gov. Roy Cooper was met with Republican resistance after announcing he would appoint an interim Board of Elections after a three-judge state court panel ruled Thursday that the current board should disband at noon Friday. The Democrat’s move would fill the gap — and allow the board to proceed with a Jan. 11 evidentiary hearing about the 9th District congressional race — until a new law governing the statewide elections panel can take effect Jan. 31.

Amid the turmoil, incoming U.S. House Majority Leader Steny Hoyer issued a statement saying House Democrats won’t allow Republican Mark Harris to be sworn in next week because of the ongoing investigation.

“Given the now well-documented election fraud that took place in N.C. 9, Democrats would object to any attempt by Mr. Harris to be seated on Jan. 3,” Hoyer said. “The integrity of our democratic process outweighs concerns about the seat being vacant at the start of the new Congress.”

The U.S. Constitution states that the House is the judge of the elections of its members and the final arbiter of contests.

The state Elections Board has refused to certify the race between Harris and Democrat Dan McCready while it investigates absentee ballot irregularities in the district in the south-central part of the state. Harris holds a slim lead in unofficial results, but election officials are looking into criminal allegations against an operative hired by the Harris campaign.

Friday’s standoff was set in motion by the latest ruling from a state court that previously had found the elections board’s makeup unconstitutional after the Republican-controlled legislature altered the board in 2016. The court had ruled earlier this year to allow the board to remain in place until Friday while it investigates the congressional race. The latest ruling came as lawmakers enacted a new law Thursday to largely restore the board to how it operated before 2016.

Cooper started the process of rebuilding the elections board Friday by informing the state Democratic and Republican parties that he plans to create an interim panel with five members of the current elections board, unless he receives different picks from the state parties. The interim board would last until the new law takes effect Jan. 31.

He said he would appoint both Democrats and Republicans to comply with pre-2016 state elections law he says is temporarily back in force.

“All of these members have election law experience and an awareness of the circumstances around the allegations involved in the 9th Congressional District election,” Cooper said in his letter to state party heads.

The outgoing state board refused a last-minute formal request by Harris to certify him the winner.

The elections board reorganization threatens to delay the Jan. 11 hearing. Lawyers for Harris and McCready had a Monday deadline to submit requests to the elections board for people they wanted to have compelled to appear and testify at next month’s hearing. But if the current elections board is disbanded without a new one to replace it, the board chairman or vice chairman who could issue the requested subpoenas wouldn’t exist.

Last week, elections board Chairman Josh Malcolm said in an affidavit to the three-judge panel that investigative staffers — who can continue working through any reorganization — had collected more than 182,000 pages of materials in response to 12 subpoenas.

Malcolm said Friday that the elections board issued “numerous additional subpoenas” before disbanding. In a letter to Harris’ attorney, Malcolm wrote that the GOP candidate had turned over only about 400 pages of subpoenaed documents and had yet to produce another 140,000 documents. Harris also had so far failed to arrange a requested interview with agency staffers, Malcolm said.

Harris’ campaign committee has pored through about 135,000 documents that needed review, the Republican’s attorney David Freedman said Friday. Harris “has cooperated and intends to continue cooperating with the investigation,” Freedman said.

If House Democrats refuse to seat Harris, it wouldn’t be the first time a chamber of Congress delayed or rejected seating a new member. In 2009, U.S. Senate leaders initially refused to seat Roland Burris as the replacement for President-elect Barack Obama’s Illinois seat. Burris had been named to succeed Obama by Gov. Rod Blagojevich, who was eventually convicted on corruption charges for trying to sell the Senate appointment.