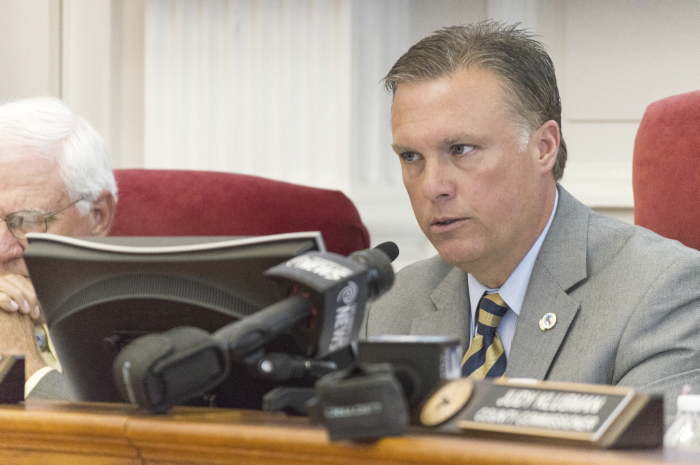 SALISBURY — Looking back on 2018, Rowan County Commissioners Chairman Greg Edds points to many high  points for the county: strides in economic development, infrastructure, workforce development and county administration, to name a few.

But the biggest accomplishment this year can be summed up — literally — in taxpayer savings of nearly $18 million, he said.

The savings came through a November-established agreement between the county and the city of Kannapolis. The agreement will see water and sewer service extended to a 318-acre site off the new Old Beatty Ford Road interchange on Interstate 85. It’s a project that was priced in March of this year at $21.24 million: $8.24 million for water service and $13 million for sewer.

The agreement obligates the county to just $3.7 million in the effort, with $1 million coming through a cash contribution and $2.7 million through debt forgiveness for the current Kannapolis Intimidators’ stadium.

Edds sees big things coming for the county through the project.

“The new interchange will be completed by the end of 2019, new utilities will be in place and that area will be prime for new industrial, retail, institutional and residential growth, investment and jobs,” he said.

These improvements are a signal that developers have been waiting on, he said.

But Edds said it is important to continue looking for potential sites for development along Interstate 85, a task the Economic Development Commission and Planning Department are already working on. The interstate, he said, is one of the county’s biggest assets and opportunities, and the county now has about 2000 acres set aside for industrial growth.

With a lot of focus on the county’s southern end, Edds points to the potential for new projects in the county’s north in the coming year. The county is preparing to ask the Metropolitan Planning Organization for a second new interchange in January, this one a mile north of the Innes Street exit.

“It will give access to Bringle Ferry, High Rock Lake and Dan Nicholas Park directly off of 85, and to the west it will give East Spencer it’s own exit and a new entrance to the town,” he said. “… This could be big.”

“Rowan County is right in the middle of the growth,” Edds said.

He said he is glad that the biggest gains for the county are yet to come because the county has only recently become prepared for progress.

“You know, a high school kid may have a date for the prom, but it’s still their responsibility to get themselves cleaned up, dressed up and ready for the big event,” said Edds. “I tell folks that we definitely have a date and we know they’re on the way, but we still have the responsibility to get ourselves ready. We’ve been doing that, and we believe that now we’re ready.”