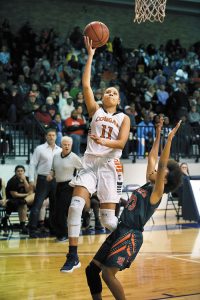 SALISBURY — Put yourself in the East Rowan’s girls sneakers for a minute.

East (9-1) has its second-best pre-Christmas record of the last 16 years.

The Mustangs’ reward?  A No. 4 seed in the Dale’s Sporting Goods Sam Moir Christmas Classic that starts today at 9 a.m. at Catawba College’s Goodman Gym.

The girls division of the tournament dates back to 1975. If you throw out 1990 and 1991 when the girls played a season-opening Thanksgiving tournament, instead of playing after Christmas, from 1975 to 2017 there were 20 Rowan teams that reached the tourney undefeated.  One from South Rowan, one from Carson, four from North Rowan, four from West Rowan, five from East Rowan and five from Salisbury.

In 2003, West and Salisbury both came into the event unbeaten, something that had never happened. They met in the final. The Hornets won a 61-60 classic.

In 2013, North and East were both undefeated entering the Christmas tournament. They met in the final, with the Cavaliers winning in a romp.

This year, in an unprecedented development, there are three Rowan girls teams still undefeated as the three-day Moir tournament gets under way.

How did three Rowan teams get this far into the season unbeaten? Well, obviously they didn’t play each other. They also have very solid squads, and while they’ve faced a few pretty good opponents, they haven’t taken on any great ones.

What this means is that fans are likely to be treated to multiple games between unbeaten teams. West and Salisbury are almost certain to clash in Friday’s 3 p.m. semifinal, while Carson is a great bet to be awaiting the winner of that struggle in the 6 p.m. girls championship game on Saturday night.

Obviously, East, South, North, Davie County and A.L. Brown will be trying hard to alter that script, but West vs. Salisbury followed by Carson vs. West/Salisbury winner is the most likely scenario.

MaxPreps ranks Salisbury 14th in the state (all classifications), with Carson 24th and West Rowan 31st.

No. 2 West Rowan (9-0) — West has had a great record coming into the tournament each of the last four straight seasons, but the Falcons haven’t made the final since they won the tournament in 2012.

Junior Abigail Wilson has been unstoppable in the paint for coach Ashley Poole and is scoring 25.4 points per game. Senior Mary Sobataka, a Coastal Carolina softball signee, is making a lot of 3-pointers. Junior Whitley Arnott, a 6-footer, gives the Falcons some size. Junior guard Gabby Blabon has been one of the county’s most improved players.

No. 3 Salisbury (7-0) — Wingate signee Bryanna Troutman is a 6-footer who stuffs stat sheets for coach Lakai Brice. Troutman can score, handle the ball, pass, rebound and block shots. The supporting cast is led by junior guard Anayia Fulson, an exciting scorer and floor leader. Freshman Rachel McCullough’s outside shooting adds another component to a team that is faster and deeper than the one that was undefeated when it was surprised by South Rowan in last year’s semifinals.

No. 4 East Rowan (9-1) — East was 3-7 at the break each of the last two seasons, but coach Kevin Holland guides the county’s most-improved team. East has often won ugly against a very light schedule, but the constants for the Mustangs have been effort, defense and junior guard Adalie Harrison, who controls the ball and makes clutch free throws. Grace Eagle was shooting the lights out early in the season, but has cooled off some. East vs. South at 6 p.m. should be the best girls game on Thursday.

No. 5 South Rowan (4-3) — Catawba signee Janiya Downs hasn’t scored fewer than 20 in a game this season and averages a county-leading 26.4. Still, Downs can’t win games by herself, and first-year coach Stacy Ellis will need  big performances from freshman Bethany Rymer, Rowan’s cross country runner of the year, and junior shooter Madison McGuire. South lost to East early this season, but the Raiders have been hard to figure. They own quality wins against East Davidson, Ledford and North Davidson.

No. 6 North Rowan (3-4) — First-year coach Lamar Wilkerson leads a team that is getting a lot of points from his freshman daughter, Hannah Wilkerson. Sophomore guard Natavia Taborn is the other standout for the Cavaliers. North has logged some wins against 1A competition but was overwhelmed twice by West Rowan.

No. 7 Davie County (3-5) — Leaders for the coach Kevin Revels’ War Eagles are seniors Morgan Lewis and Emma Slabach (her late mother Angie Browder Slabach was tourney MVP in 1983). Davie owns a surprising win over Mooresville (which gave West Rowan trouble), but it has lost big to West and Carson and by 15 to East Rowan. Davie hasn’t made the tourney final since 2002 and hasn’t won since 2000.

No. 8 A.L. Brown (0-7) — Coach Doug Wilson lobbied for years to get the Wonders in this tournament. They’re finally in it (at least the girls are), but the outlook isn’t rosy. The Wonders get Carson in today’s first round and have already lost a pair of blowouts against the Cougars. A.L. Brown also has lost to West twice, but it did give East a battle (42-34) in its last outing before the holiday. Players to watch include juniors Jaliyah Simmons and Jaliah Smoutherson.

By Mike London mike.london@salisburypost.com SALISBURY — Officially, the award is called Rowan County Coach of the Year. But there hasn’t... read more