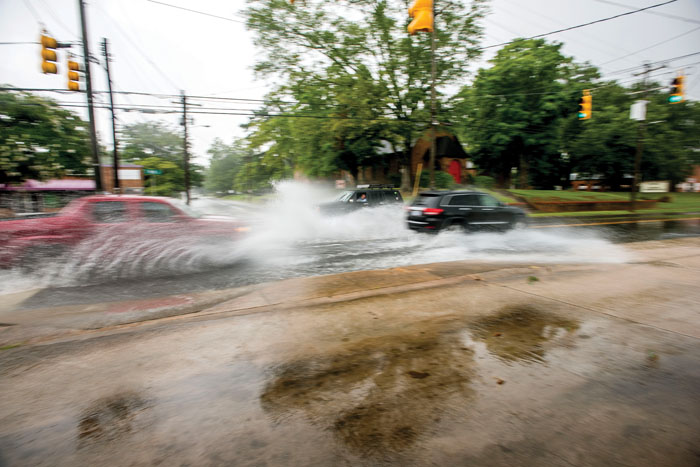 SALISBURY — Forecasters predict Mother Nature will fall short when it comes to breaking Salisbury area precipitation records this year — but only slightly.

National Weather Service meteorologist Joshua Palmer said that about 63.5 inches of precipitation was recorded in 2018. That falls short of a 1929 record at a recording site closest to downtown, when some 70.69 inches of rain and other precipitation fell.

But Rowan County Weather forecaster Steve Monday said that one last-ditch effort to close the gap will move into the area about 10 a.m. this morning. Accumulations of more than 2 inches are possible by late Friday, for a year-end difference of less than half a foot.

The county will be in a flood watch from 7 p.m. today until 7 a.m. Saturday, Monday said.

According to the National Weather Service, the ground is already saturated from recent snowmelt and rainfall, and streams and reservoirs are running high.

Though not record-breaking, Palmer said this year’s totals are still “way above the normal.” Average yearly totals are about 41.55 inches, according to a National Weather Service site 9 miles outside the city, he said.

Compared to the next-highest year on record at that site, 2003 with 60.05 inches, higher levels of precipitation were seen in 2018’s later months.

“That year was much wetter than this year in the spring to summer timeframe, but then it got dry up until November in the middle of the month,” said Palmer. “It was Dec. 2 this year when we finally passed the 2003 value.”

Of course, it wouldn’t take much for a year to be wetter than 2018’s spring and early summer. July found Rowan County facing its driest year on record, with only 14 inches of precipitation reported by July 13.

Levels reported closer to Salisbury’s downtown are the fourth wettest on record, with differences ranging from 2 to 7 inches: 63.84 to that 70.69 record.

This level has been achieved in a minimum of 114 days of measured precipitation, Palmer said. He explained that volunteer observers monitor and record data at National Weather Service sites, meaning some recorded measurements may have occurred over several days rather than the single date of the report.

More than 100 volunteers serve for the National Weather Service Greenville-Spartanburg region, in which Rowan County falls. Palmer said many of these sites have data going back over 100 years and have been manned for generations by families.

The Salisbury downtown site has records dating back to 1893, he said.

“It’s not a million years, but for the time we’ve been recording, this is a very healthy chunk of data.”