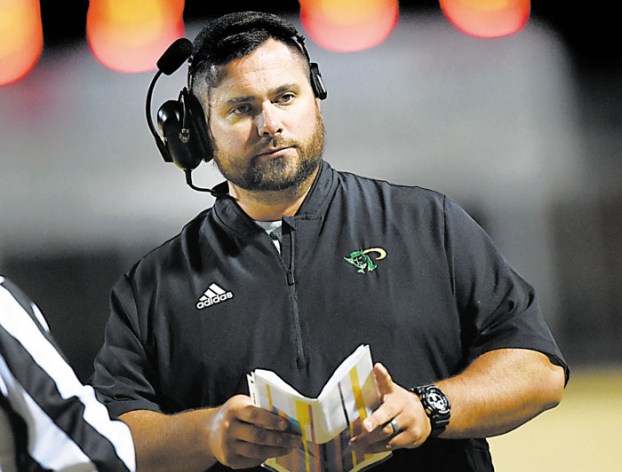 SALISBURY — Officially, the award is called Rowan County Coach of the Year.

But there hasn’t been a winner yet who hasn’t pointed out that it’s really a staff award. Assistant coaches are the underpaid, overworked, under-appreciated backbone of every successful program at every level of football.

North Rowan’s Ben Hampton is the Post’s Coach of the Year for the second time in three seasons. He led North to a 9-3 season and a second-place finish in the Yadkin Valley Conference. Thanks to a first-round bye in the 1AA state playoffs, North was the last team standing in the county.

The Cavaliers were dominant, at times. They shrugged off crazy weather that had them playing Wednesday, Thursday and Saturday games.

They spent most of the year ranked in the top 10 in the 1A state poll. They were the best offensive team in the county (31.9 points per game) and, by far, the best defensive team (7.8 points per game). They outscored opponents, 383-97. There was a five-game winning streak. North Rowan didn’t lose a game between Aug. 24 and  Oct. 19.

“We always have a goal of leading the county in offense and defense,” Hampton said. “We demanded high expectations of our players, and while we had some tough losses, for the most part, our kids met those expectations.”

It’s true North played several weak opponents in the 1A Yadkin Valley Conference, but six shutouts, one short of the school record, was still impressive. North shut out a Carson team that moved the ball on just about everybody. North blanked a Lexington team that made the playoffs, shut out an eight-win South Stanly team that averaged 28 points per game, and held Salisbury to seven points.

Even in the playoff loss to Polk County, North’s defense allowed only 13 points.

North Rowan’s defense was legit. Many of the 43 points that North Stanly scored against the Cavaliers could be attributed to a zany flurry of early turnovers.

North defensive coordinator Josh Sophia and Hampton go way back — to 1998 when Hampton was a promising freshman football player at West Rowan and Sophia was a young assistant on the staff of rookie West head coach Scott Young. They’ve developed a lot of trust. Sophia handles the 4-2-5 defense.

Sophia was serving as the linebackers coach for Hampton at North when defensive coordinator Steve Williams left for Northwest Cabarrus, where his son was playing.

“We preach family, family, family all the time, so everyone understood Coach Williams leaving,” Hampton said. “Sophia became our defensive coordinator then, and he’s done a great job the past three years. We’ve led the county’s defensive stats all three years.”

Offensively, North was good, balanced enough that senior quarterback Willis Mitchell and junior running back Malcolm Wilson both made the county’s all-time leaderboard.

Maybe it wasn’t the banner football season that Hampton hoped for, but it was a great year for him nonetheless. A second child and first daughter, Lily Catherine, was added to the Hampton family shortly before official football practice started.

Coach of the Year wasn’t an easy choice.

East Rowan’s John Fitz was named North Piedmont Conference Coach of the Year. The Mustangs also finished a modest 6-6 after stirring high hopes with a 3-0 start, but they registered the county’s strongest  wins of the season, beating North Stanly and South Iredell. North Stanly was ranked 88th in the state by MaxPreps, while South Iredell was ranked 96th.

The highest-ranked Rowan team at the end of the season was West Rowan at No. 134.

Playing without its starting quarterback and running back, East lost at Statesville in the first round of the playoffs, 7-6. East had lost at home to the Greyhounds, 53-3, a week earlier.

Then there was Salisbury’s Brian Hinson, the 2017 coach of the year. With a very young team, Hinson managed a second straight winning season, going 7-5.