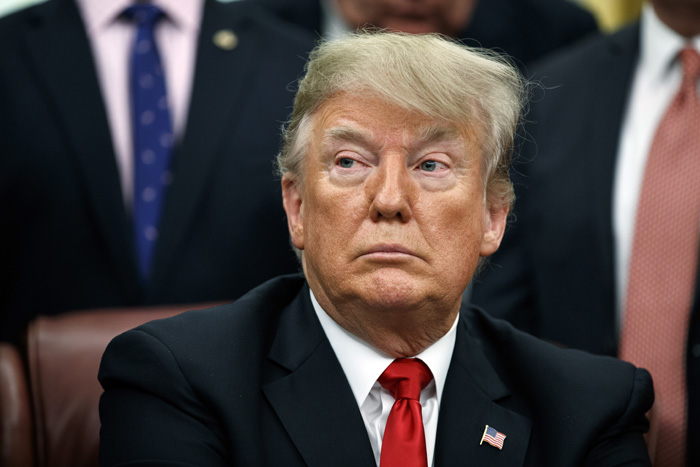 President Donald Trump listens during a signing ceremony for legislation in the Oval Office of the White House. Evan Vucci/Associated Press file photo

The revolving exit door from the White House and the evident disloyalty from some of the “non-Trumper” federal personnel can easily give one the impression that President Donald John Trump has a major staffing problem on his hands.  The retention of family members as close confidantes points to the issue of who can he trust?

Such invariably creates conflicts of interest and seems, on the surface, to favor nepotism which was partially addressed by the presidency of John F. Kennedy when his brother Robert was his attorney general.

It is intriguing the number of non-Republicans held up for praise when it was party loyalists who have helped carry the water for this beleaguered presidency. One of the bad jokes among Black Republicans is that when our leadership wants to talk about black America they go for African-American Democrats instead of coming to those of us who have been elected to something and have served often at tremendous personal costs.

Having a seat in the arena, some things are quite apparent about the actions of incumbent members of Congress who chose not to run again. Though it was not openly acknowledged, Trump hit a nerve with neglected Americans, who are willing to give him some leeway in doing what he feels must be done, even if it meant sacrificing the tried and true who have held office.

The uncertainty of what the Trump administration would do on any given day gave too many elected politicians the “heebie jeebies,” and folks may have decided to stock up on their benefits and credits on their way out. Those who couldn’t eat the elephant whole decided one bite at a time wouldn’t do what needed to be done.

Many in Congress, in choosing not to run again, sought the easy way out when they couldn’t have their way or felt opportunities for power diminished, failing to appreciate that politics is like making sausage — it may taste good but making it remains a blood sport not geared to the weak at heart or those afraid to get their hands dirty. Town-hall meetings were a relatively new form of communications, too often involving planted questions and not enough interaction with the citizens who should have been better represented.

Candidates were running on a set agenda determined not by the districts but often by the party, thought groups or PACS who didn’t have to live among them or face the consequences of what the outcomes would be. Think tanks have been allowed to dominate public policy. Others cowardly retreated from the opinion of their districts, which often strayed from those entrenched in politics to representing other than their own.

Term limits are something that should be considered sensible and a way of increasing the diversity of ideas needed to build a stronger nation. Unfortunately, Congress operates based on seniority, which requires long-term service for leadership positions. This could be overturned by drawing lots for committees in some sort of manner to eliminate opportunities to dominate powerful committees. This is also important because, as Trump is seeing, people with experience in certain areas need opportunities in their preferred arena to build their skills. Representatives should step down after no more than three terms in any congressional office.  As hikers learn in considering the presence of snakes, the first encounter wakes the person up, the second makes the person mad and the third forces the person to bite you.

Limits on political spending should come to a head for the ridiculous amount of money being needed to obtain a federal or state legislative seat — $1 billion for a presidential run, $20 million or more for any senatorial seat and no less than $1 million for a U.S. representative’s seat that often paying less than $200,000 per year.  That’s ridiculous!

Those totals are enough to fund some school districts or bring state retirement funds equity. Realistically, citizens should ask, “How do folks go into these positions poor and come out filthy rich?”

The Supreme Court should be ashamed of itself for ruling PACs and interests with money have the right to contribute as much or more than individuals to elections when those special interests are not citizens and cannot vote. Given the power of representation for those with wealth and connections compared to what John Q Public can afford, wealth unfortunately tilts the balance of justice away from the individual.

We don’t need to game the system anymore than it already is so that only billionaires can run and in turn rule.

The rule of law should be the US Constitution. If it isn’t in there, we should not be doing it.