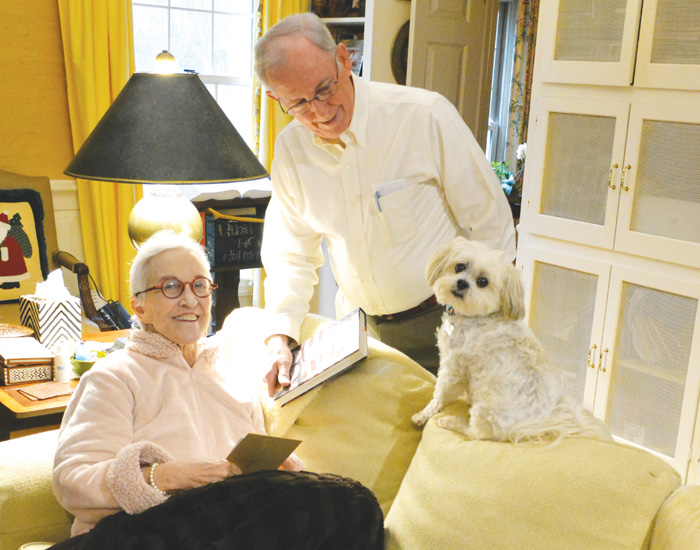 Chance Reynolds laughed when his mother asked him what he wanted for Christmas.

People all over Salisbury — and beyond — are laughing with relief and  joy, celebrating with Patsy Reynolds and her family at Christmas.

On Nov. 27, Patsy underwent successful surgery to remove a tumor from her pancreas. Diagnosed in March, she endured grueling chemotherapy and radiation to be a successful candidate for the Whipple procedure.

Also known as a pancreaticoduodenectomy, the complex surgery is used to remove the head of the pancreas, the first part of the small intestine, the gall bladder, and the bile duct.

The surgery was accomplished with textbook precision, according to Ozzie Reynolds, Patsy’s husband of 50 years and a retired ophthalmologist.

Since March, he’s faithfully sent out regular updates to a growing army of family and friends. Those who read the updates might have felt they had surely earned a medical degree, too.

Last Wednesday, Patsy, 71, received a handwritten note from Gus Andrews — not the former county commissioner, but a Gus Andrews who lives in New York City. Somehow, he’d mistakenly gotten on the email update list. But he felt compelled — like so many others — to follow Patsy’s story.

“Dear Reynolds family,” he wrote, “My best wishes for peace and healing for you this holiday season and in the new year. You don’t know me, but I’ve been getting your email updates about Patsy over the past few months, apparently because of a typo (I think you meant to send to another Gus Andrews). I also lost my grandmother and father to cancer last year, and it was hard to be reminded. But honestly, knowing how hard it is, I’ve been really glad to learn that Patsy pulled through treatment well. I’m rooting for you all. Hope the New Year is bright! Love, Gus.”

Strangers and friends alike have reveled in the good news.

The day of Patsy’s surgery, a contingent of family and close friends of George and Margaret Kluttz went to the Bell Tower to ring the bell once they got the word all was well.

“In our office at the Robertson foundation, we have a key to the Bell Tower,” says Margaret Kluttz, who chairs the Blanche and Julian Robertson Family Foundation. “I thought, ‘There’s no law against it. What the heck; we’re gonna go ring that bell.’ It was joyous to know Patsy’s surgery went so well.”

Since then, Ozzie and Patsy have learned from her medical team that the tumor was removed, no lymph nodes were affected, and all the margins around the tumor were clear. Now, Patsy faces five additional chemotherapy treatments — a cycle of one every other week — that will ferret out and destroy any “hidden” cells.

“I am really not looking forward to it,” Patsy said. “But I’ve ridden the horse this long, and I’m not getting off now.”

Having surgery was a risk. But it represented Patsy’s only chance for a cure. Ozzie and Patsy took that risk in stride.

“It wasn’t treated as a big deal,” says Ozzie, 74. “It was the next step. It had to be done. Dwelling on the negative has no value. It’s more about positive attitude.”

Patsy didn’t have much time to think about things the morning of surgery.

“It all happened so fast you didn’t have time to think. I was just hoping I could find my glasses afterward. And then you wake up and you go, ‘Oh my gosh, I made it.’”

Patsy doesn’t remember waking up after surgery, but her family told her she was as clear as a bell. She woke up for real a couple of days later.

“I felt like that man on the pole was the nicest person in the world,” she says, referring to the epidural medication she received at her chest cavity.

It was inserted farther up her back than epidurals used for childbirth, and it stayed in place until 24 hours before her release. She spent a total of seven days in the hospital, a day longer than planned, to ensure her pain management plan was in place.

Three weeks later, she says, she’s still having some pain. But it’s under control. As for her recovery, she notes, her care team members “seem right amazed about it.”

Patsy started walking in the hospital. Her doctor wants her to get up and move at least once an hour.

“It hurt when I first started walking,” she says. “But then I realized the next day it was easier to move than the day before, so it was worth it.”

She plans to resume playing bridge — a passion of hers — by mid-January. She’s sleeping downstairs in her former office that Margaret and her daughter, Meg Dees, cleaned out before surgery for her recuperation. She goes to her room about 9 or so in the evenings, and a nurse comes to be with her so Ozzie can sleep. She gets up about 8 in the morning.

Just because she’s in her room, she says, doesn’t necessarily mean she’s asleep.

“I’ve had a couple of bad nights,” she says.

But some nights, she’s simply awake.

“I mostly think about what I’d like to do in the spring,” she says. “I like to project ahead. And I think about my friends and family. Thinking about people makes me happy.”

Patsy is not yet up to having visitors, but she and Ozzie have been buoyed by phone calls, emails and texts. There’s even a basket at their front door for visitors to leave notes for her. She thought the well wishes she’s received since March would slow down around the holidays. She was wrong.

“Even during Christmas, can you believe it?” she says. “People have been so loving and so dear. It just elevates you.”

“Somebody told me, ‘The whole town is behind you,’” Patsy says.

So is Germantown, Tennessee, where Chance lives with his wife and children — children who are, in Patsy’s words, “my fabulous grandchildren.”

“It’s been kind of a roller coaster, from the initial prognosis where your percentages aren’t very good to where we are now,” says Chance, 45, a pilot for FedEx.

“To get to the surgery was the main goal, and to have a successful surgery was the next,” he says. “When you get this outpouring of support, it’s great. And we’ve had it in Germantown, where we’re real active in our church. We have been passing along Patsy’s updates to them. There’s been a huge amount of support here, too. It’s been nice to have support in both places.”

It’s been meaningful to both his wife, Marjorie — who lost both her parents in 2013 — and their three children, sons Chancellor, 14, and Reese, 13, and daughter Kate, 11.

“My parents and I were all still at home together when it happened,” Chance says. “We all went through our separate grief cycles, but we were never alone. It was a defining moment in my life.

“Going through what we did with JohnO, we never take for granted there will be a next Christmas. My greatest fear was that my children would lose another grandparent.”

The fact that Patsy came through surgery has been an enormous relief for Chance.

“It will be nice for my family to be together at Christmas and know we’ve got some good chapters ahead of us,” he says. “We’ve been given the opportunity to spend time together. Before the surgery, we didn’t know if we’d have that.”