Take 2: Cowboys try to wrap up NFC East, this time against the Bucs 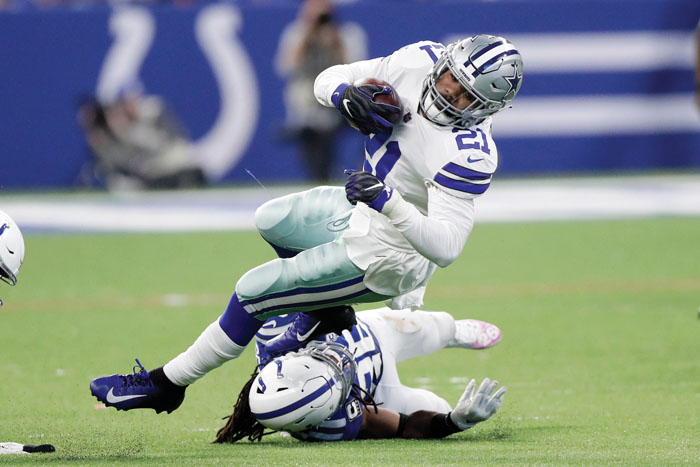 FILE - In this Sunday, Dec. 16, 2018 file photo, Dallas Cowboys' Ezekiel Elliott (21) is tackled by Indianapolis Colts' Clayton Geathers (26) during the second half of an NFL football game, in Indianapolis. Elliott and the Dallas Cowboys will take their second shot at trying to wrap up the NFC East title Sunday, Dec. 23, against Tampa Bay. The Cowboys were shut out in their first attempt by the Indianapolis Colts, who badly needed a win to keep their playoff hopes alive. (AP Photo/Michael Conroy, File)

ARLINGTON, Texas (AP) — Ezekiel Elliott and the Dallas Cowboys failed in their first attempt to wrap up the NFC East by losing to Indianapolis when the Colts badly needed a win for their playoff chase.

Now the NFL’s rushing leader and his teammates will try again Sunday, this time facing an opponent with nothing on the line a week after Tampa Bay was eliminated from postseason contention with a loss in Baltimore.

“I think everyone in this locker room understands how important this game is,” Elliott said with Dallas coming off the franchise’s first shutout loss in 15 years . “I think it would be kind of beating a dead cow to come in here and harping on what happened last week.”

Jameis Winston and the Bucs (5-9) are putting the wraps on a strange year that began with the quarterback’s personal-conduct suspension, followed by his inability to keep the job once Ryan Fitzpatrick cooled off.

Fitzpatrick’s struggles gave him another shot, and Winston is set for his fifth straight start, the longest stretch for either QB this year.

“Even though we’re out of contention, it still feels good to win,” said receiver Mike Evans, a bright spot for an offense that had little trouble churning out yards but often didn’t turn them into points. “Christmas is coming up. It’ll be good to have Christmas sitting on a ‘W.’”

The Cowboys (8-6) just want to end their division race.

Dallas ran off five straight wins to earn the enviable position of needing one victory in the final three games to reach the postseason for the second time in three seasons with Elliott and quarterback Dak Prescott, the NFL Offensive Rookie of the Year on a playoff team two years ago.

Moving the ball wasn’t a problem for the Cowboys in the first half of the 23-0 loss to Indianapolis, but they squandered several scoring chances. A defense that has carried Dallas most of the season had the bigger letdown in the second half.

The Cowboys can win the division with another loss if Washington and Philadelphia lose. They don’t want to go there.

“Guys were excited to get back there and get rid of that last game and kind of build from scratch and kind of build our swag back,” said cornerback Byron Jones, who was voted to his first Pro Bowl this week. “I know we’re going to come out feisty and fierce.”

Things to consider as the Cowboys try to build on a 9-1 home record in the series with the Bucs, 11-1 if you include two playoff wins in the 1980s:

Elliott and Todd Gurley of the Los Angeles Rams have been locked in a duel for the rushing lead for several weeks. Elliott, the 2016 rushing champion as a rookie, extended his lead despite the Cowboys’ paltry showing at the Colts. He’s 98 yards ahead with two games left, and also leads in yards from scrimmage.

A team spokesman said Wylie got hurt during Thursday’s workout as the Browns prepared to face the Cincinnati Bengals on Sunday. There were no immediate details on how the popular Wylie, who is in his second season with Cleveland, was injured.

Wylie is resting at University Hospitals and will likely miss the home finale.

Wylie was relatively unknown before his appearances on HBO’s “Hard Knocks” series this summer made the big-bellied coach a favorite with Browns fans, who loved how he mocked players needing to stretch and how his stomach bounced when he yelled, “set, hut” during drills.

This week, the Browns released a video with Cleveland’s offensive lineman prancing like reindeer pushed Wylie on a blocking sled while dressed as Santa Claus .

On Wednesday, Browns guard Joel Bitonio said his teammates were initially leery of doing the video.

“And then we went out there and filmed it and it’s been a hit,” Bitonio said. “Anything that Bob has done this year I think has been a hit. It just shows, honestly, he’s one of the best human beings I’ve been around. He’s a great coach but what he does off the field — he takes care of the people in the building and he’s just a great dude. So to do something like that and show people kind of a fun side.”

Panthers’ QB Heinicke out to prove he’s no joke…