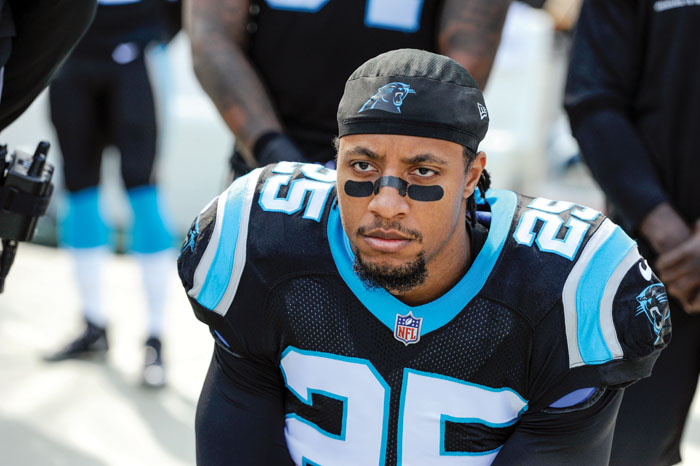 FILE - In this Nov. 25, 2018, file photo, Carolina Panthers strong safety Eric Reid (25) knells along the sideline during the national aAnthem before the start of an NFL football game against the Seattle Seahawks in Charlotte, N.C. Reid says he is “not surprised” he has been drug tested by the NFL six times in the past 11 weeks, his Panthers teammates and coaches are growing increasingly annoyed at the frequency of the league’s “random” policy. (AP Photo/Mike McCarn, File)

CHARLOTTE (AP) — Panthers safety Eric Reid says he’s been fined a fourth time this season by the NFL for an illegal hit — this time for a hit that didn’t draw a flag.
The play came in Monday night’s 12-9 loss to the Saints, when Reid and linebacker Luke Kuechly converged on wide receiver Michael Thomas near the sideline.
Reid posted a video of the play Friday on Twitter and wrote “adding it to the file,” referring to his ongoing collusion case pending against the NFL. He alleges that owners conspired to keep him out of the league for kneeling alongside Colin Kaepernick during the national anthem to protest social and racial injustice.
Reid tweeted he was fined $20,054.
He said Thursday the league has drug tested him six times in 11 weeks.
___
More AP NFL: https://apnews.com/NFL and https://twitter.com/AP_NFL