All-County girls tennis: WR’s Brown is Coach of the Year 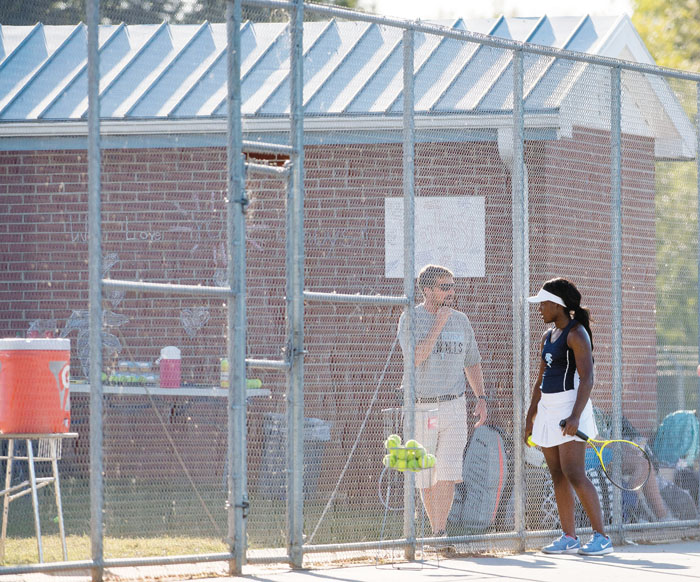 JON C. LAKEY FILE / SALISBURY POST ... John Brown, left, coaches Tabby Landy, between sets, during a match in 2017. Brown is the Coach of the Year this year for All-Rowan County girls tennis.

MOUNT ULLA —  A pine knot is a very hard substance in a normally soft wood.

There was an undersized linebacker for East Rowan’s football teams in the late 1960s named Johnny Brown, but his teammates rarely called him Johnny. He’d earned the nickname “Pine Knot” because no one had ever seen anyone tougher.

“Pine Knot” also wrestled and was runner-up in the old WNCHSAA. He went on to coach wrestling at Corriher-Lipe Middle School and at East and was on the mat as a referee.

His son, Jonathan, went to East Rowan and became a terrific wrestler for coach Barry Justus. He had his father’s tenacity.

In 1992, he was 3A state champ as a 103-pound sophomore. As a 119-pound senior, he was the Dutch Meyer Award winner as the finest wrestler in Rowan County. He went into the state championships in 1994 with a 32-0 record but suffered a shoulder injury in a quarterfinal match.

“Wrestling was what I was passionate about in high school, it was my thing,” Brown said. “But I also enjoyed tennis. I played tennis at East for fun.”

So in high school, Brown was coached not only by Justus, but by long-time tennis coach Worth Roberts, another East institution.

“That’s two guys there that I don’t think anyone could ever say anything bad about,” Brown said. “I was lucky to learn from both of them.”

After he graduated from Western Carolina, Brown went into teaching. At China Grove Middle School, 20 years ago, he became not only a rookie teacher but a wrestling coach and tennis coach. That’s an unusual combination, but Brown was uniquely qualified.

Fourteen years ago, he made a move to West Rowan. No one has called him Jonathan in a while. Now it’s just John.

“I do know a little bit about tennis, and I can help most of the girls with their strokes,” Brown said. “It’s not like I could teach (West’s No. 1 player) Payton Holt a whole lot about tennis, but I’m a good enough player that I could go out and hit with her.”

Brown also was in high-level competition as a high school athlete. That was frequently helpful.

“I could give Payton a few tips in the really tough matches,” Brown said. “I could help her a little bit when she was nervous or if she got flustered.”

Holt was great, never losing a county match in four seasons as West’s No. 1, but one person can’t do it alone. Brown helped elevate the games of the supporting cast — Madison Smith, Lacy Waggoner, Skylar Jahnke, Mira White, Kelsie Crider and Gracie White.

West had five all-county players this season after having one in 2017.

When Crider was hurt at midseason, White stepped into the No. 6 spot, and the Falcons kept going.

West finished 15-2, winning two big matches with South Iredell and splitting with Carson. West’s other loss was to Cox Mill in the 3A state playoffs.

“I knew we were going to be pretty good when I’d ride by the school in the summer and see a lot of our girls out on the court playing,” Brown said. “That’s the kind of commitment that it takes to win a championship.”