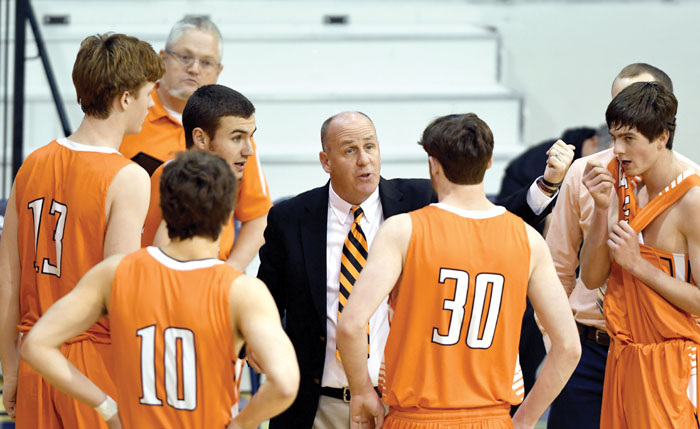 MOCKSVILLE — Davie County boys coach Mike Absher knew defense was going to be the key to handling a Carson team that is shooting better and better.

“We scouted them and we knew we had to get out and guard them,” Absher said. “Defense was the key and we played about as well as we have all year.”

Carson won a neutral site game early this season but is 0-4 in true road games.

Davie and North Rowan both finished pre-Christmas action with 6-0 records. With representatives of both schools involved on a FaceTime call, Davie won the coin toss for the No. 1 seed in the upcoming Dale’s Sporting Goods/Sam Moir Christmas Classic.

Carson, the No. 6 seed, plays in the 10:30 a.m. game on Thursday against third-seeded Salisbury.

SPENCER — While North Rowan lost the coin toss on Thursday, the Cavaliers racked up another victory on the court.

North was in a struggle with West Rowan for about 12 minutes, but the athletic Cavaliers took charge with a string of dunks and beat the Falcons, 75-44.

North led 37-27 at halftime and dominated the second half.

As the No. 2 seed in the Christmas tourney, the Cavaliers will play in the 1:30 p.m. game next Thursday against seventh-seeded South Rowan.

The eighth-seeded Falcons will play No. 1 seed Davie County at 4:30 p.m.

KANNAPOLIS — Pace is everything for East Rowan, and for a half the Mustangs held their own on the road with unbeaten A.L. Brown.

But it was all Wonders in the second half. They had an 18-0 run to start the half and blew out the Mustangs for a 57-31 victory.

“East had their tempo in the first half, but we challenged our guys to play harder in the second half,” A.L. Brown coach Shelwyn Klutz said. “We played with a lot more energy on defense in a third quarter that was very big for us. We forced some turnovers, and that led to a lot of easy points for us.”

An earlier game between the two squads at East was halted at halftime by a scoreboard malfunction.

The Wonders are playing in East Lincoln’s Christmas tourney. As the No. 2 seed, they’ve got a 1 p.m. game against Forestview next Thursday.

Cameron Gill led Salisbury with a career-high 19 points, while Zay Kesler scored 13 and Kevin Chawlk had 10.