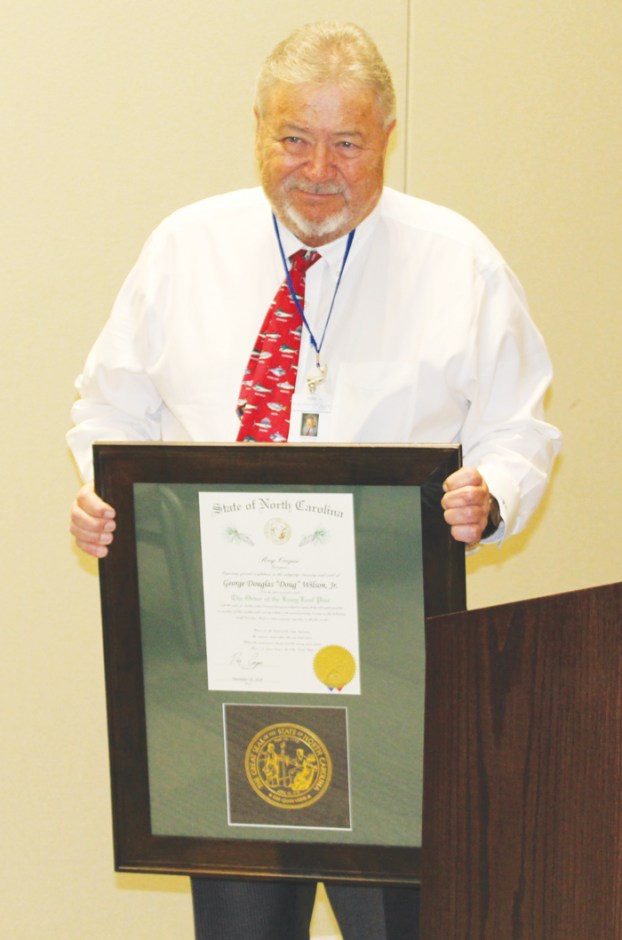 KANNAPOLIS — The Kannapolis City Council successfully surprised one of its members on Monday with a presentation of North Carolina’s highest award for state service.

Joined by members of his family, Councilman Doug Wilson was presented with the Order of the Long Leaf Pine for his years of civic involvement across the county.

Eric Dearmon, a board member of Downtown Kannapolis Inc., presented the award.

“Doug is one of the most committed individuals we have to our city and our community,” Dearmon said. “From coaching hundreds of kids through the years in youth sports to serving in numerous civic organizations and serving on our City Council, Doug’s impact goes well beyond that of most people.”

The Order of the Long Leaf Pine Award is signed by Gov. Roy Cooper. It’s a tradition that began in 1963 under Gov. Terry Sanford to recognize four Spanish dignitaries visiting the state for economic development purposes.

Since then, it’s been presented to North Carolina residents with a history of community service and involvement. Recipients include Michael Jordan, Maya Angelou and the Rev. Billy Graham.

“When I think about the people who have gotten this, it’s overwhelming,” said Wilson. “I’m proud to be one of them.”

In other business from Monday’s City Council meeting:

Ryan Dayvault and Haas were both nominated. Haas was elected on a vote of 4-3.

• The council approved program updates for its solid waste and recycling collection services.

Details and contract negotiations will be completed with the city’s solid waste provider, Waste Management Inc. A new contract will begin next July.

The resolution follows the council’s November approval of an agreement with Rowan County that details the financing of water and sewer extensions to a development property at Interstate 85 in southern Rowan County called the High Bridge Site.

Since the property is slightly closer to both the town of Landis and the town of China Grove, Kannapolis cannot annex it on its own. For the project to move forward, the General Assembly must facilitate the annexation for Kannapolis. The resolution formally makes that request.

• The council appointed representatives to the Transportation Advisory Committee and Technical Coordinating Committee.

Mayor Heggins reflects on year in State of the City address

SALISBURY — Mayor Al Heggins highlighted the City Council’s work and looked ahead in her State of the City address... read more