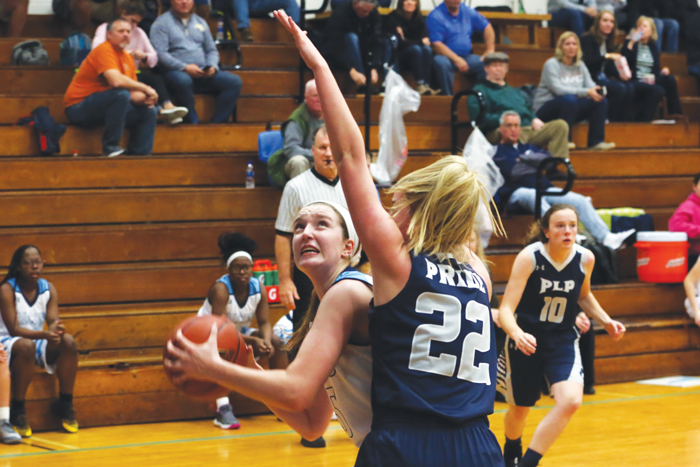 James Sipes / for the Salisbury Post West Rowan’s Abigail Wilson fights for a shot and draws a foul under the basket against Pine Lake on Friday. West Rowan beat Mooresville on Monday night, 70-65.

MOORESVILLE — West Rowan  got a surprisingly tough challenge at Mooresville but pulled out a 70-65 decision.

Abigail Wilson led West with 32 points. The junior is averaging 26.3 points per game and has scored at least 30 three times this season.

Wilson poured in 21 in the second half and 13 in the fourth quarter.

Mary Sobataka was shut out in the first quarter but came back to make three 3-pointers and scored 18.

Gabby Blabon was hot early and scored all eight of her points in the first quarter.

West also started 7-0 last season but lost to Mooresville in its eighth game.

West is at home tonight against A.L. Brown and plays at North Rowan on Thursday.

MOUNT PLEASANT — East Rowan notched another win, easily triumphing at Mount Pleasant, 46-22, but the Mustangs weren’t at their best.

“It was ugly,” East coach Kevin Holland said. “We were out of sync and we’re  just not shooting the ball very well right now. Our pressure was turning them over, but we still had a hard time converting turnovers into points.”

East was in control 18-0 after the first quarter, but Holland said the scoreboard looked a lot better than East actually played.

The good news for the Mustangs was a season-high 18 points for junior guard Adalie Harrison. She scored mostly on drives and fast breaks and is closing in on 500 career points.

Brooke Mitchell helped East  (7-1) get started  by making two 3-pointers in the first quarter. She scored a season-high 11.

East scored only four points in the fourth quarter.

“They wanted to run the clock in the fourth and we agreed to it,” Holland said. “We’ve got three games this week and you don’t want anyone to get hurt in a game that’s decided.”

The Tigers (2-6) were led by Kayla Ballard with seven points.

“We’re happy to win, but this one just didn’t feel right,” Holland said. “We’ll get back to work at practice on Tuesday.”

East plays at South Stanly on Wednesday and goes to A.L. Brown on Thursday.

CONCORD — Carson has been very strong in the early going and has just overwhelmed a schedule that hasn’t been overly challenging.

Several programs that are usually pretty good are way down this season.

The Cougars shot well enough to beat just about anyone — 57 percent from the floor and 42 percent on 3-pointers.

“We got out to a fast start and continued to play hard for four quarters,” Carson coach Brooke Stouder said. “We got great production again from all of our players. We shot it well and were pretty efficient offensively.”

Carson (9-0) has topped 70 points in four straight outings and has held six opponents under 30.

Carson has won eight games by at least 30 points, including a 76-45 win against South Rowan. The only adversity the Cougars have encountered came in a 52-41 victory at Central Cabarrus. The Cougars will host the Vikings in a rematch tonight.

Colbie Perry scored 16 of her 19 points in the first half and made five 3-pointers. McKenzie Gadson scored 17 on 7-for-7 shooting and had four steals. Carleigh Perry had 13 points and three steals. Taylor Conrad scored 10. Victoria Post had eight points and five steals. Kary Hales made three steals.

Besides hosting Central Cabarrus tonight, Carson plays at Davie County on Thursday to wrap up pre-Christmas activity. Carson will be the No. 1 seed for the Christmas tourney if it wins its last two outings. West Rowan and Salisbury also are undefeated but have played fewer games.