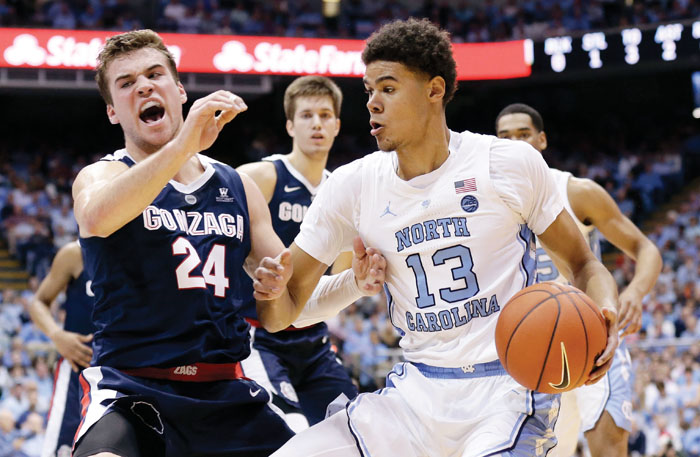 CHAPEL HILL (AP) — North Carolina made shot after shot, finally backing its Hall of Fame coach’s claim that he has a sharp-shooting bunch. And when they did miss, the Tar Heels relentlessly flew to the rim to pursue the ball for another chance.

Saving all that for a highly ranked opponent in a marquee nonconference game will only help with confidence, too.

Cameron Johnson had 25 points and six 3-pointers to lift No. 12 UNC over No. 4 Gonzaga 103-90 on Saturday night, a strong performance for a team that had flopped in a previous measuring-stick nonconference game.

It was a few days after Thanksgiving when the Tar Heels lost at No. 5 Michigan, looking overwhelmed at both ends and leaving Roy Williams to say — among many things — that “right now we stink.”

This time, facing a team that ranked No. 1 in the AP Top 25 a week ago, the Tar Heels (8-2) shot 57 percent in the first half to build a 14-point lead at the break. And they never let the Zags closer than eight after halftime.

UNC finished the game shooting 55 percent, including 13 of 25 from 3-point range, in a matchup featuring two of the nation’s best offensive teams. Yet it was the Tar Heels’ work on the boards that proved just as important.

North Carolina finished with a 42-21 rebounding advantage. That included 14 offensive boards that led to a 27-0 edge in second-chance points, which proved critical on a night when neither team missed too often.

Zach Norvell Jr. scored 21 points to lead the Bulldogs (9-2), who shot 56 percent after halftime and 51 percent overall. But Gonzaga never recovered after falling behind by double figures in the first half and kept coming up a shot or two short of really upping the pressure on the Tar Heels to hold that margin after halftime.

“They’re right up there with anybody we’ve played,” Gonzaga coach Mark Few said. “Especially on the glass, we haven’t been beaten on the glass like that all year. And I know we certainly haven’t given up 50 percent in both halves for defensive field goal percentage. So, they’re right there.”

Gonzaga: The Bulldogs sat at No. 1 in the AP Top 25 about a week ago, but they’ve lost two straight — though both games were serious nonconference tests. They lost a close one last weekend against No. 3 Tennessee, then fell behind early Saturday night and never could catch up against a UNC offense that looked very comfortable on its home floor.

UNC: The Tar Heels offered a reminder that they have the firepower to score with just about anybody. One significant concern, though, was they committed a season-high 23 turnovers that led to 29 points for Gonzaga — the kind of mistakes that could’ve proved very costly had North Carolina not been shooting so well and dominating the glass.

While Johnson and Luke Maye (20 points, 16 rebounds) led UNC, the Tar Heels got a big performance from junior point guard Seventh Woods. Woods finished with a career-high 14 points, including two 3-pointers and three straight baskets right before halftime for a 53-39 lead.

“If I see an opening, I’m going to try to take it and make a play,” Woods said.

It was the first double-figure scoring game of Woods’ career.

The 103 points were UNC’s No. 2 total against a top-5 opponent and only the third time the Tar Heels had cracked 100 points in those games.

Gonzaga: The Bulldogs return home to face Texas-Arlington on Tuesday.

UNC: The Tar Heels play No. 19 Kentucky on Dec. 22 in the CBS Sports Classic in Chicago.