A visit from St. Mueller? 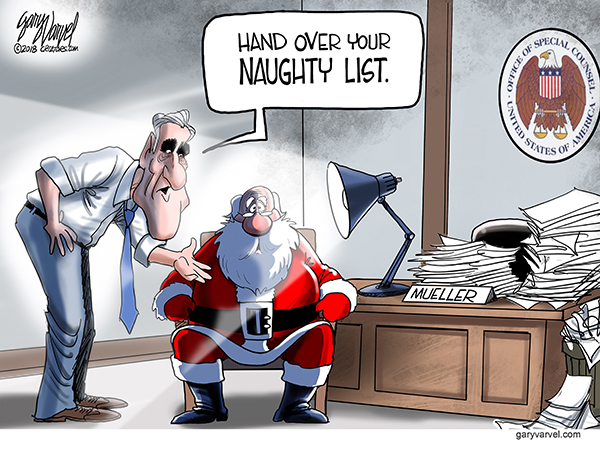 ’Twas weeks before Christmas, and all through the nation,

People were feeling a certain frustration;

The plea deals were signed, the sentencing begun,

But Mueller, alas, was STILL not quite done.

The Dems had high hopes; the House was won!

They envisioned impeachment, a prez undone.

But the dominoes fall so slowly, it seems:

Thirty-three others caught — not the man of their dreams.

“Horseface,” he types, and claims many false feats.

He trashes democracy, truth — newspeople, too,

And feeds us all lies, a big pile of doo.

He’s Christian, he says, but won’t say the Creed,

But let’s not forget, five advisers did fall,

So maybe the big man is next, after all?

Is that too much to ask from ex-G-man Mueller?

That his probe grow better and not — we fear — duller?

More rapid than gunfire his proof will appear,

And he’ll shout out snitch names for all us to hear!

I’ve got all I need to tie Trump to Putin!”

Then the tops of the White House and Kremlin, too,

The likeness of which it’s been years since we’ve seen;

Not since Dick Nixon, the last of this kind,

To run the country like such a horse’s behind.

Then takes off on another golfing vacation.

But not before crying “America first!”

To rile up supporters in a way that’s the worst.

Get angry, get ugly, get mean and low down,

His presence in Washington, oh what a curse!

He wasn’t so bad on the television screen,

Or as a rich playboy wanting just to be seen.

But as president? Oy, it’s a terrible thing,

To have him as our leader — the embarrassing sting!

Women he uses, men he abuses,

No one is safe from his blundering bruises.

And that hair of his, always in need of a comb.

I laughed when I saw him, ‘til the joke was on me,

And then thought “perhaps, this country I’ll flee,”

Haha! That was then, when Trump I didn’t quite get.

But now I know better; he’s taught us through Twitter;

And my feelings toward him? Well, quite bigly bitter.

The U.S. will survive him, that much is true,

But the scars will be deep — and morale black and blue.

So we look to Sir Mueller, or the next election;

One of them — surely? — must make the correction.