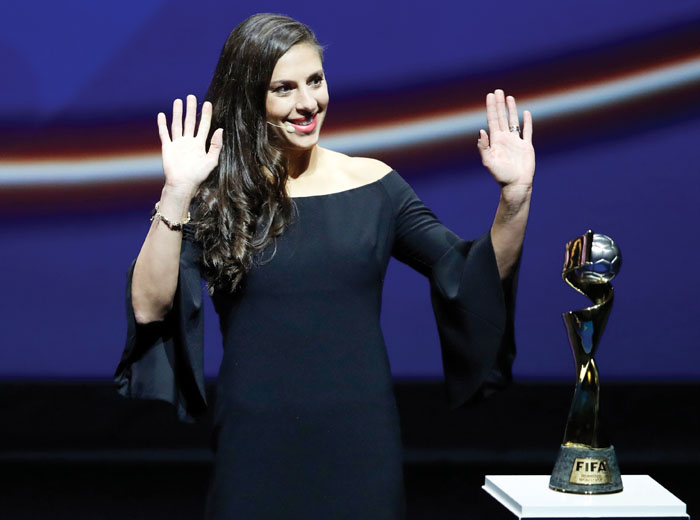 PARIS (AP) — U.S. national coach Jill Ellis was asked before the Women’s World Cup draw whether she thought her team would be grouped with Sweden for the fifth straight time.

“Oh, we will,” Ellis laughed, recalling her reply.

Turned out she was right.

The defending champion Americans were grouped — again — with Sweden for next summer’s showcase tournament in France. The draw to set the group stage for the 24 teams was held Saturday at a gala event in Paris amid a backdrop of unrest in the country.

Host France will open the World Cup on June 7 against South Korea in Paris.

The Americans defeated Japan 5-2 — highlighted by Carli Lloyd’s hat trick — in Canada in 2015. The U.S. has played in every World Cup since the competition started in 1991, winning the inaugural event and also in 1999.

The No. 1-ranked U.S. team landed in the same group with Sweden for the sixth time overall. Also in Group F are Thailand and Chile, which is making its World Cup debut.

The U.S. will open the tournament against Thailand in Reims on June 11. Sweden, ranked No. 9, will face the U.S. on June 20 in Le Havre — the final group match for both.

“I know about the history, tough games during many years,” said Sweden coach Peter Gerhardsson, who took over the team after Pia Sundhage’s retirement in 2017. “We feel that we have a chance and that’s the most important thing,”

The game will be a rematch of the Olympic quarterfinal in Brazil, where Sweden advanced on penalties after a 1-1 draw. Afterward, U.S. goalkeeper Hope Solo called the Swedes “cowards” for bunkering on defense.

“It’s a good draw for us,” said Ellis, who attended the draw. “It pits us against a couple of teams we’re not that familiar with, which I like, and then obviously Sweden. I like having Sweden in the third game because it allows us to settle into the tournament.”

The pots for the draw were based on the world ranking, except that No. 3 France, as host, led the first pot, followed by the U.S., Germany, England, Canada and Australia. The updated FIFA rankings were released Friday.

France has gone 7-1-2 this year, the loss coming against England in the United States. This will be the fourth World Cup for Les Bleues, who landed in a group with South Korea, Norway and Nigeria.

Didier Deschamps, who coached the French men to victory in the World Cup in Russia five months ago, was greeted with a roar Saturday when he walked on the stage. He said he’s confident in Les Bleues under coach Corinne Diacre.

“I don’t have advice to give to Corinne, she knows women’s football far better than me,” he said. “We’ve spoken several times. She knows that I’m at her disposal. Obviously, there’s a lot of expectation from the fans and media. Corinne and her staff know what awaits, but that shouldn’t be a negative thing.”

England, ranked No. 4, was grouped with No. 8 Japan, No. 20 Scotland and No. 36 Argentina. With an average ranking of No. 17 it is statistically the toughest group. England was the surprise third-place finisher in Canada and has been on the rise the past several years.

The squad is coached by Phil Neville, a former Manchester United and England defender who played in three European Championships. The Lionesses have gone 7-2-3 under Neville this year.

Also drawing a tough group was No. 6 Australia, which is joined by No. 10 Brazil and superstar Marta, who will be playing in her fifth World Cup. Australia defeated Brazil 1-0 in the Round of 16 in Canada.

It will be the seventh overall World Cup for the Matildas, who went 7-4-6 this year.

“The first immediate instinct is: It wouldn’t be a major football tournament for the Matildas unless we had to play Brazil — 2007, 2011, 2015 and now 2019, and the Olympics we’ve crossed with Brazil,” coach Allen Stajcic said. “So very exciting to be playing them again.”

The U.S. went undefeated this year, finishing 18-0-2, including a 2-0 victory over Canada in the final of the CONCACAF qualifying tournament. The team’s unbeaten streak is at 28 games, dating to a 1-0 loss to Australia in the 2017 Tournament of Nations.

Lloyd was asked at the draw if she were confident the U.S. can win again.

“Pretty confident, I must say,” she said. “This squad is as talented as can be, we’ve got the depth and a great coaching staff in place.”

The draw was held at La Seine Musicale, a dome-shaped concert hall perched over the river Seine on the outskirts of Paris and not to be affected by the anti-government demonstrations. Tear gas filled central Paris, with riot police fighting to contain thousands of yellow-vested protesters.

The groups that will play next year in France: