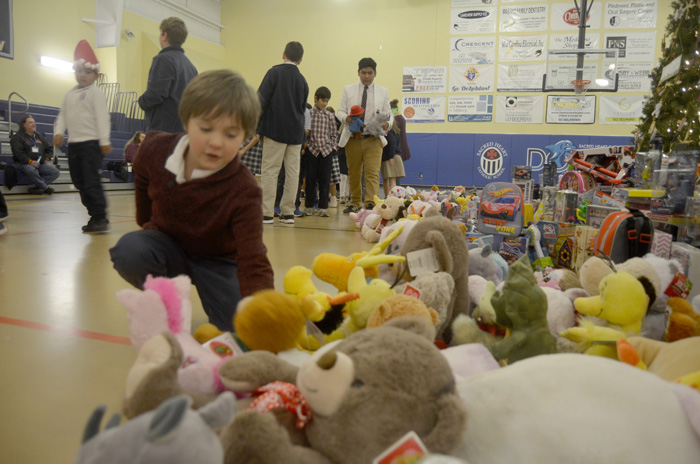 Noah Melton, 7, places stuffed animals into a pile with 754 other toys that were donated by he and his fellow students at Sacred Heart Catholic School for Toys for Tots. Shavonne Walker/Salisbury Post

SALISBURY — It’s not often that the usually talkative longtime Toys for Tots Coordinator Raul “Arbe” Arbelaez is speechless. But the act of kindness from the 184 students at Sacred Heart Catholic School was the reason he had a hard time finding the words.

One-by-one the students all brought in a plush stuffed animal on Thursday, bringing their contributions to 754 individual toys.

The idea came from fourth-grader Aidan Melton, 9, who has been volunteering with the organization since he was five years old. He asked Principal Tyler Kulp if he could take what they’d been learning about showing kindness to others a step further with a toy drive.

As to why he wanted to extend the idea of giving to others to his classmates, Aidan simply said he likes helping people.

He added that he was proud of his classmates for helping give to others.

Aidan’s goal is that “everybody could have a little Christmas,” this year.

“Our strength is in what we can do,” Kulp said.

The school has been conducting a series on virtues and the one they’ve been studying this week is kindness.

“Our kids are trying to give back,” Kulp said.

“It’s for the kids. We try to share our blessings,” said Colleen Smiley, grandmother to Aidan Melton.

Smiley helped take Aidan’s idea and spread it throughout the school. She was also able to reach out to Domino’s Pizza, who donated pizza for the classes with 100 percent participation as well as gave coupons to students, two of whom were chosen from each grade.

“I’m so proud of you guys,” Eckert said.

“When you look at this it really takes your breath away,” Kulp said.

“This is amazing that all of these toys will be packed for families this weekend,” Arbelaez said.

“I’m truly speechless. Everybody should be proud of themselves because you gave and gave and gave,” Arbelaez said.

Smiley said she is glad that Principal Kulp allows the students the room to give to the community.

“He was supportive. He likes to see the kids pick something and run with it,” she said.

This isn’t the first time students stepped up to support the community. In November, the Kulp and Father John Eckert had a friendly contest as to who the students thought grew the best beard during No Shave November. The students raised over $840 in change. The money was donated to St. Jude Children’s Research Hospital.