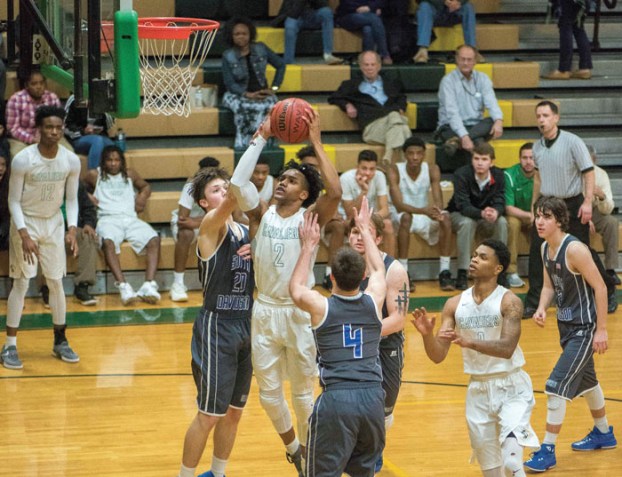 Never mind that the host Cavaliers had a 16-point lead on Albemarle with just 2:04 remaining.

“We were ready for that game to just end,” senior Dayjuwon Cooke exhaled, moments after North held on for an edge-of-your-seat, 64-60 win. “Every time I looked up at the clock, it seemed like it was going down one second at a time. I wanted to speed it up.”

North (3-0 overall) may have skidded across the finish line, yet still earned an impressive victory. A contender for the conference championship this season, it tumbled down the stairs and somehow landed on its feet.

“No matter how you get it, you’re happy to get it,” said first-year North coach Jason Causby. “When you do this as long as I have, you learn that winning ballgames is hard. We showed how hard it can be tonight.”

The Cavs seemed to be in control after Cooke drove the left side for North’s final basket with 2:24 to play. When teammate Brevin Goodlett converted both ends of a one-and-one 20 seconds later, they owned a commanding 62-46 edge.

“I just needed another minute and 30 seconds,” Albemarle coach Marc Raye said, after the Bulldogs (1-4, 0-1) used a 14-2 finishing kick to make it close. “I had it all figured out. What really killed us was the first three minutes of the second half, when we went oh-for-six on three-pointers. We were in the game. Next thing you know, they were up 12.”

Goodlett scored a career-high 33 points for North, braiding a few jackhammer jams with well-timed, alley-oop layups and several authoritative dribble-drives to the basket. “My teammates,” he said modestly. “They helped me get there.”

One who couldn’t was senior Derrick Page. The 6-foot-3 guard suffered a left ankle injury in the opening minutes and never returned — but seemed in good spirits afterward. “I’ll have it checked out (Saturday),” he said.

North made five 3-pointers in the first quarter and mounted a 25-13 lead on Denario Robinson’s layup at the buzzer. Albemarle’s Brandon Christian — a 6-5 senior forward — scored eight of his team-best 18 points in the second period. Teammate Cameron Williams’ last-minute three-point play drew the guests within 36-30 at the half.

“We were making the easy plays,” Causby said. “We were letting the game come to us, keeping everything defensively in front of us. But then we got really excited about making the spectacular play, rather than just doing our jobs.”

North limited Albemarle to four field goals in the third quarter and launched the final period with Goodlett’s dunk from the right baseline. The Cavs still led 62-49 when Christian fouled out with 1:38 to play.

“That was big,” said Raye. “We’ve been struggling to finish games — missing free throws, missing layups — and then had to do it without Brandon. I told our guys not to look at the scoreboard and just play with one little shape. Heart.”

The Bulldogs stormed back and pulled within 62-58 when Marc Raye, Jr. beamed in a 3-ball with 28 seconds left. The verdict wasn’t sealed until Goodlett sank two free throws with 22.6 seconds to go.

“This game shows how much fun we can have when we play together,” Cooke said, after contributing 16 points. “We couldn’t hold our heads down. We had to keep playing and not let up until it was over.”

Oklahoma QB Murray is named the AP Player of the Year