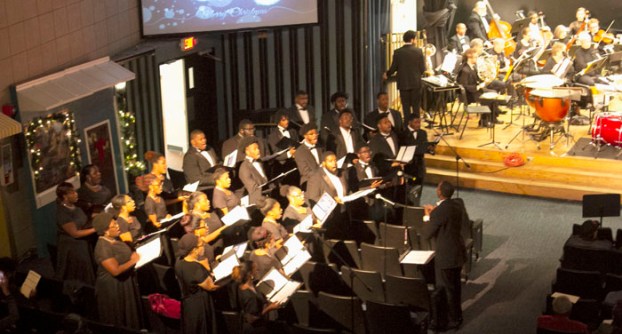 SALISBURY – In a show that was magical meets whimsical, an enchanted evening of music, songs, dance and charm, Livingstone College’s Christmas production, “Miracle on Monroe Street,” showcased the college’s concert choir and top-tier musicians along with more than 60 dancers from Triple Threat Dance and Charm companies.

Under the direction of DaVaughn Miller, chairman of the music and theater arts department, the concert choir sang eight songs. During “The Polar Express,” performers portraying shoppers presented a lively tap dance number.

“Miracle” took the audience on a spiritual journey of a mischievous grandchild, played by Kayla Graham, who learns a lesson about being good with a little help from an angel, played by Sari Lewin.

More than 400 people attended the program despite bad weather, which also caused the tree-lighting ceremony to be moved inside the lobby of Varick Auditorium.

The Salisbury Symphony Youth Orchestra, led by Hunter Schaeffer, played music in the lobby before the program, followed by refreshments.

“The show was absolutely spectacular and was a perfect way to kick off the Christmas season at Livingstone and in the Salisbury community,” said Livingstone President Jimmy R. Jenkins Sr. “After a two-year hiatus, I am proud to say we returned with a bang. Thanks to everyone who came out to support the show and to celebrate the true meaning of Christmas.”

Even more impressive was the collaboration of so many groups, said Miller. The production included 30 members of the concert choir, 24 members of the orchestra, and 62 members of Triple Threat Dance and Charm ranging from ages 2 to 16, in addition to five actors and live animals.

One of the highlights of the show was a nativity scene that featured two alpacas and goats.

Krystal Stukes, owner and artistic director of Triple Threat, said the young dancers were star-struck at the animals. But they weren’t the only ones, as folks lined up to take photos with the animals after the show.

Assisted by choreographers Ebony Stockton and Shavonda Woods, the students incorporated class time with preparing for the show. The dancers, dressed in costumes, used the aisles and stage to perform and engage the audience.

“It was a great collaboration,” Stukes said.

SALISBURY — People who attended a meeting about Salisbury’s election process Wednesday evening agreed the room should be full when... read more