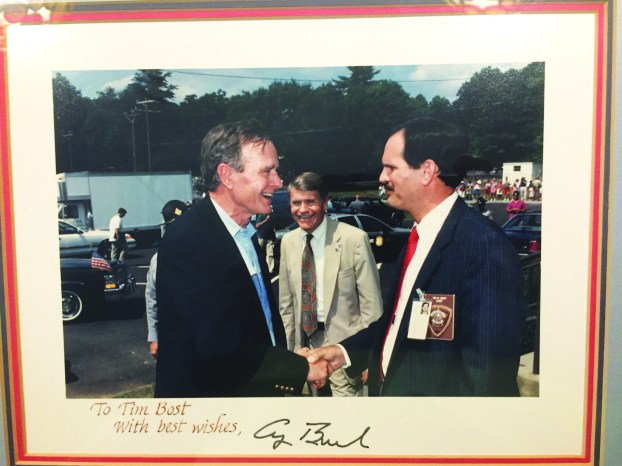 ‘Made me feel like I was the only person there’

One more local memory of our 41st president: Tim Bost shared what he calls one of his favorite photos — meeting former President George Bush many years ago at the Faith Fourth of July event.

“This is an official White House photo. I was one of a few people that got one that day,” Bost says. “I had been appointed by former Sheriff Bob Martin to serve with the U.S. Secret Service as the local chief of security in preparation for the event.

“President Bush was incredibly warm and personable. I will never forget how he made direct eye contact with me as we were talking and made me feel like I was the only person there, although we were among thousands.”

Why was Bush laughing?

“I had just asked him to take me for a ride in his presidential limousine. He laughed and said ‘Well it’s not mine, but if it was I would take you for a ride.’ ”w

Dr. Richard Miller served on the Rowan-Salisbury School Board from December 2010 to December 2018. He served as chairman of... read more