Close for a while, then Duke blows away Hartford 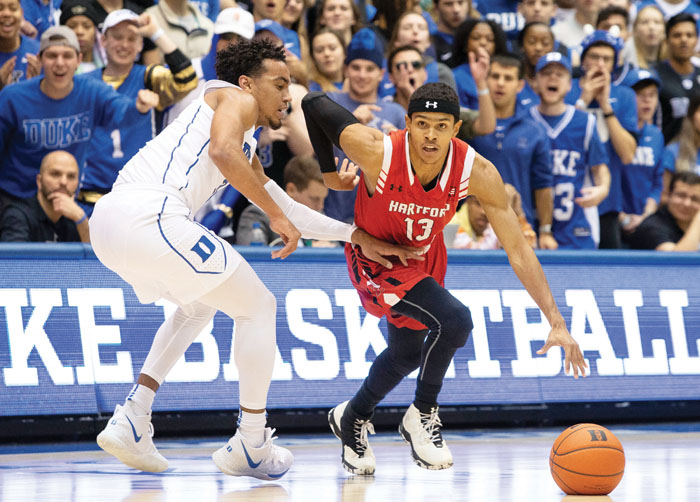 DURHAM (AP) — Coach Mike Krzyzewski slammed a chair during a timeout shortly after halftime. By the end of the game, RJ Barrett was slamming home an alley-oop pass off the glass.

Just that quickly, Duke can turn a frustrating night into yet another blowout.

Barrett had 27 points and a season-best 15 rebounds, and third-ranked Duke pulled away to rout Hartford 84-54 on Wednesday night.

But it wasn’t always a laugher — Coach K took a timeout roughly 90 seconds into the half and slammed the bottom of his chair onto the floor to get his team’s attention.

“I didn’t know what he was doing at first — I was like, he just had the chair and he started hitting the ground,” Williamson said. “It’s just motivation for us to pick it up, because when he’s doing that, obviously it means we’re not doing our job.”

It worked. Duke shot 62 percent in the second half to more than make up for hitting just five 3-pointers — matching a season low.

J.R. Lynch scored 13 points and Jason Dunne added 12 for Hartford (3-7), a 38-point underdog that hung around well into the second half before fading. Dunne’s long 3-pointer pulled the Hawks within eight points with just over 12 minutes left.

Williamson then hit two free throws, Jack White followed with a steal and dunk and Cameron Reddish — who had missed all six of his 3-pointers to that point — buried a 3 in transition to give the Blue Devils their largest lead to that point at 54-39. Duke rolled from there for its fifth blowout in five home games.

Hartford: There was plenty for the Hawks to build on in this one, and they acquitted themselves much better than their No. 215 Pomeroy ranking — or the final score — might indicate. Their zone defense flummoxed the Blue Devils on the perimeter and their hustle kept them in the game for roughly 30 minutes.

“Going forward, for our program, we can only benefit from an experience like that,” Hartford coach John Gallagher said. “Can we play in a game in March where it’s a Duke or a Kansas or a Gonzaga and get ourselves in a situation where we’re an America East champion? Tonight can only help us.”

Duke: The margin of victory would indicate otherwise, but for much of this one, very little came easy for the Blue Devils — four nights after everything seemed that way in a 64-point rout of Stetson. It’ll look like a blowout in the box score, but Krzyzewski will no doubt find plenty of teachable moments during the film review.

Williamson missed two dunks but his top highlight came from his passing skills. With the outcome decided, Williamson stole the ball near midcourt and found himself on a 2-on-1 break with Barrett. He flipped the ball off the glass to Barrett, whose dunk made it 79-48. “I feel like, to be a great transition player, you have to know who’s running with you and what the defenders are doing,” Williamson said. “I had gotten the dunk the play before, RJ had given it to me, so I said, ‘I might just reward him for giving me that pass.’”

Duke’s five 3s matched the season low most recently reached in the loss to Gonzaga, and excluding Barrett, the Blue Devils were 2 for 22 from 3-point range. Duke had 33 points at halftime — its lowest-scoring half of the season, falling short of the 36 points it scored in the second half Nov. 14 against Eastern Michigan.

Duke blocked 10 shots, its third game with double-digit blocks. “This team can play great defense, and it can block shots, and that helps,” Krzyzewski said. “Or it can pressure shots. So you have to keep building on it.”