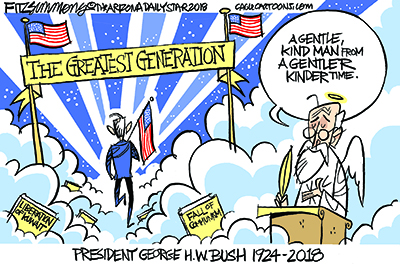 Strive to live a life like George H.W. Bush’s

By Jeb Bush and  James A. Baker III

The two us of never met a man as remarkable as George Herbert Walker Bush. We never will again. As both public figure and private individual, he set a standard of excellence astonishing in its scope.

As a leader, he deftly guided the world through a peaceful ending to the Cold War after it had stood on the brink of nuclear destruction for four decades. He did so with the wisdom of a man well-schooled in foreign affairs who selflessly put his country above himself and partisan politics. The world – enemies and allies alike – respected him as a leader of modest demeanor but steely resolve. He was proud of our nation’s ideals and pragmatic in advancing our interests. Above all, he understood our country’s unique place in world affairs and nurtured international institutions and coalitions that supported it.

As a politician, George H.W. Bush bridged partisan divides and built consensus for far-ranging laws that continue to help our citizens today. The Americans With Disabilities Act and legislation that largely ended acid rainare just two examples. He remains the model for the shrinking band of bipartisan officials who represent the responsible middle of our polity, where deals are struck that last longer than a presidential term.

As a public servant, he first answered the call of duty in World War II, flying 58 combat missions and being shot down over the Pacific. After military service, he accepted positions of increasing responsibility on behalf of his country, as U.N. ambassador, ambassador to China, director of the Central Intelligence Agency and vice president. He daily followed the mantra prescribed by John F. Kennedy: “Ask not what your country can do for you, ask what you can do for your country.”

As a friend, George H.W. Bush was without peer, always there in good times and bad. When Jim Baker’s first wife died of cancer at 38, George and Barbara Bush helped pull their friend out of despair. He routinely quoted the verse of William Butler Yeats: “Think where man’s glory most begins and ends, and say my glory was I had such friends.” Those words were more than poetry to him. They were a way of life.

And as a husband, father, grandfather and great-grandfather, he savored the responsibilities and joys of family. After being elected vice president, he said his greatest accomplishment was the fact that his kids still enjoyed coming home. They cherished those moments together because Dad or Gampy, as he was called, dispensed love rather than orders. The most important lessons for his family were already manifest in the exemplary life that he and Barbara lived during their 73 years together.

George H.W. Bush was a fierce competitor – in sports, in politics and in life. His kindness and civility cloaked a competitiveness that inspired his friend and son. He wouldn’t have been as successful without it.

At the same time, he also saw the good in people, even his adversaries, and hope in the face of adversity. “No problem of human making,” he once said, “is too great to be overcome by human ingenuity, human energy, and the untiring hope of the human spirit.” We need similar optimism today, at a time when cooperative problem solving too often gives way to a rancorous blame game.

George H.W. Bush lived a life of astonishing fullness as leader, politician, public servant, hero, friend and family man. He did almost everything a person could do in their lifetime – including jumping from an airplane at age 90. And he excelled at most.

He reached the pinnacle of power by living the virtues that make for a good Boy Scout: loyalty, trustworthiness, humility, reverence.

In today’s cynical world, such concepts may seem old-fashioned to some and easy to dismiss. But the cynics are wrong. They are not old-fashioned. They are time-tested. More than 2,300 years ago, Aristotle believed that the virtues of prudence, temperance, courage and justice were vital to mankind. George H.W. Bush embodied them all. And he made the world a better place because of his adherence to them.

George H.W. Bush was a wonderful human being who possessed a strong faith in God and believed there is greatness in each of us. The occasion of his passing should serve as a reminder that we can – by living life to the fullest, keeping our eye on the common good and working together- build a more perfect union here at home and a more peaceful world abroad.

Bush, a former governor of Florida, is the son of President George H.W. Bush. James A. Baker III served as White House chief of staff and secretary of state in the Bush administration.

RALEIGH — If there’s one thing that can unite Republicans and Democrats in a polarized state legislature, it’s handing out... read more