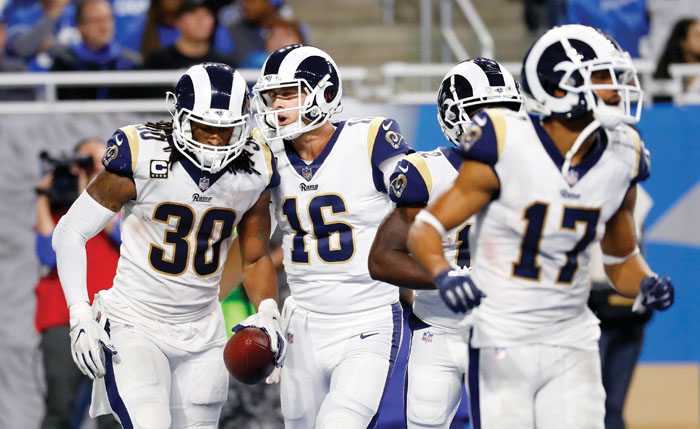 Los Angeles Rams quarterback Jared Goff (16) greets running back Todd Gurley (30) after Gurley's 13-yard rush for a touchdown during the second half of an NFL football game against the Detroit Lions, Sunday, Dec. 2, 2018, in Detroit. (AP Photo/Paul Sancya)

By SIMMI BUTTAR, AP Sports Writer
NEW YORK (AP) — The Los Angeles Rams are back in a familiar place: the top spot in the NFL.
The Rams reclaimed the No. 1 position in the latest AP Pro32 poll . They received all 12 first-place votes and 384 points in balloting Tuesday by media members who regularly cover the NFL.
The Rams (11-1), the NFC West champions, have the league’s best record and are a strong contender to make a run at the Super Bowl.
The New Orleans Saints slipped to No. 2 after losing in Dallas last week.
“Get revenge against Bucs?” asked Fox Sports’ John Czarnecki. The Saints head to Tampa this week to face the Buccaneers, the only other team to beat New Orleans this season.
The Kansas City Chiefs stayed at No. 3 after beating Oakland. The Chiefs, who at 10-2 have the AFC’s best record, will attempt to reach the Super Bowl without the NFL’s reigning rushing champion. The Chiefs released running back Kareem Hunt on Friday after TMZ posted a video of him shoving and kicking a woman in a Cleveland hotel in February.
Also staying in place were the New England Patriots at No. 4. The Patriots are closing in on their nearly annual AFC East title as they head to Miami to face the Dolphins on Sunday.
The league’s hottest team, the Houston Texans, moved up two spots to climb into the top five. The Texans beat Cleveland last week for their ninth win a row.
Another team playing well, the Los Angeles Chargers, kept their spot at No. 6 after a second-half rally on the road to beat the Pittsburgh Steelers 33-30. The Chargers have won eight of nine and will have an easier matchup on Sunday as they host the reeling Cincinnati Bengals.
“The Chargers proved they are a different team than in years past with a come-from-behind win in Pittsburgh,” said Jenny Vrentas of The Monday Morning Quarterback. “Anthony Lynn is a Coach of the Year candidate.”
The Steelers stayed at No. 8 and will face Oakland on Sunday without running back James Conner, who has a sprained left ankle.
The Chicago Bears slipped two spots to No. 7 after losing in overtime to the New York Giants. The Bears will have a challenge on Sunday night when they host the Rams.
The Seattle Seahawks, who inched up a spot to No. 9, will close Week 14 by hosting Minnesota on Monday night in a game that could go a long way toward determining the NFC wild-card race. The Vikings dropped two spots to fall out of the top 10 at No. 11 after losing at New England.
“Offense is out of whack and the defense isn’t as dominant as in recent seasons,” Alex Marvez of Sirius XM said of the Vikings.
And the Cowboys moved up two spots to round out the top 10. The Cowboys will host the Eagles in a key NFC East game on Sunday.
“A speedy and hard-hitting Dallas defense that hounded (quarterback) Drew Brees into submission readjusts its sights to Carson Wentz in a key NFC East matchup,” said Ira Kaufman of Fox 13 in Tampa, Florida.
___
More AP NFL: https://apnews.com/tag/NFL and https://twitter.com/AP_NFL