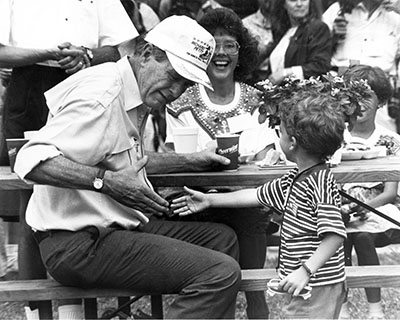 Three-year-old Alex Bruce reaches out to shake the hand of President George H.W. Bush during the president's visit to Faith on July 4, 1992. Bruce's mother gave the boy the idea, according to dad John Bruce. (AP Photo) 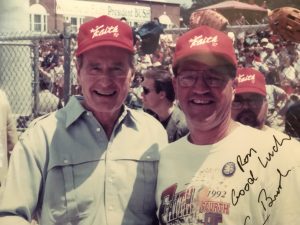 George H.W. Bush was already popular in Rowan County before he landed in Faith for its famous Fourth of July celebration in 1992.

But that day, as he joked and ate barbecue and played softball, he became our personal president.

John Bruce, then a member of the Faith Jaycees, remembers the whirlwind of preparations and the absolute joy of the day.

His son, Alex, was 3 at the time. With some urging from mother Ann, young Alex walked up to the Leader of the Free World at a picnic table and thrust out his hand.

Bush responded in kind, giving Alex’s hand a presidential shake, and the fleeting moment passed. But when the Bruces opened up the Concord Tribune the next day, spread across the front page was a photo of the moment they’ll treasure forever — their young son reaching out in hospitality to the 41st president of the United States.

“A town of 553 made room for President Bush and thousands more who came Saturday to celebrate Independence Day,” the accompanying Associated Press story started out.

The photographer did not identify Alex, but the Bruces sure could. After ordering several copies, they sent one to Bush and asked for his autograph. Bush signed it and sent it back.

The words Bush spoke that day went right to the heart of the matter.

This was way before the days of smartphones and selfies; personal portraits were printed and prized — and countless photos were shot that day.

Ron Horton also got the president to sign the photo someone snapped of him with the president that day. They stand side-by-side, wearing matching red baseball caps emblazoned with “Faith.”

“President Bush was so gracious and was talking and picking with all the ball players,” recalls Ron, a retired educator. “My youngest son, Adam, was the ball boy and every time the President came in to bat he would have him sign his hat, his shirt and his glove. Finally the President said ‘Son, I have signed everything you have on; here you can have my bottle of water.’ Adam took it and drank it!”

National, state and local edia followed the president everywhere. Horton’s older son, Greg Jones, now an attorney, was first base coach for the softball game, but the caption on a photo in the Greensboro paper identified him as a Secret Service agent.

“It was a wonderful day for the community,” Horton says, “and so many people were able to talk to he and Mrs Bush.”

Faith native Bill Williams, then editor of the Gaston Gazette, wrote about his experience with the president. He’ll take it from here:

“There were thousands of people already gathered on the school ground when they looked up and there was Air Force One, regal in its blue and white colors and lazing just a few hundred feet high, right over the treetops and right over my old homeplace just beyond left field of the baseball diamond.

“The softball game had started and the Faith Reds and Faith Blues were hard at it under a clear sky and burning temperatures. The president was looking down into a sea of faces, waving flags and a patriotic pageant that extended from the quarries on the north end of town to the quarries on the south end. The loud speakers came on with a stirring rendition of ‘The Battle Hymn of the Republic’ and the reaction that ran through the crowd was immediate. Said a hardened old bystander: ‘I felt a chill run all the way down my spine, and I admit that a few tears watered my eyes.’ ” 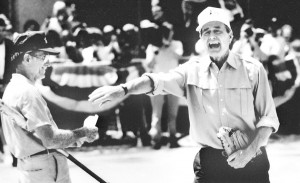 ‘GET OUTTA HERE!’ President George H.W. Bush, right, reacts during a 1992 visit to Faith after Bill Williams, left, reminds him of the last time the two were on a ball field together.

“I was at bat for the Faith Blues and was leaning on a bat at the plate when Gov. Jim Martin came over.

“We shook hands and I told the governor that this was the second time that George Bush and I had met on a ball field. He wanted to know when and where. ‘Bush was playing for Yale and I was playing for Duke in 1948, when we met in Durham.’”

“… and the President of the United States came down the first base line to shake hands with the guy who played shortstop for Duke that day 44 years ago.

“I said. ‘Mr. President, I just want to remind you that on that day in Durham you went zero for two while I got two for four.’ He looked at the box score that I held in my hand, bopped me on the shoulder and said: ‘Well we’re going to do better than that today.’ …

“In came the first pitch and George Bush leaned into it with a mighty swing. It could have been Casey at the bat. He got good wood (aluminum) on the ball and it flew through the infield for a single. Bush was on base. One pitch, one hit ball. One President of the United States on first base.

“I stood there reveling in the moment. You have to know that I had played a thousand ball games on that diamond when I was a boy; and there stood George Bush, the most powerful man in the most powerful country (that ever was) standing on MY old homeplace.”

The death of the 41st president will be much mourned this week, his passing serving as a memorial to a... read more