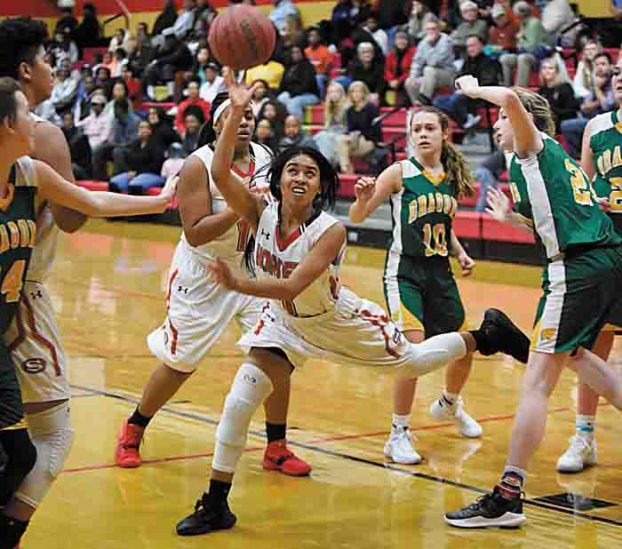 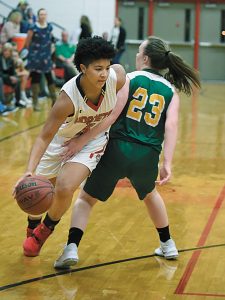 SALISBURY — Salisbury’s junior point guard Anayia Fulson is a terrific player, but no one is perfect.

In the opening five minutes of Salisbury’s Central Carolina Conference game against West Davidson, Fulson couldn’t buy one. Her floaters didn’t fall. Her 3-pointers clanged. Even her uncontested layups trickled off the rim, leaving Fulson shaking her head and shrugging her shoulders in disbelief.

“She told me not to worry about it, that sooner or later the shots would fall for me,” Fulson said. “And they did.”

When Fulson finally made a layup late in the first quarter, it didn’t seem like much, but it was the trigger for an explosion. She would score 25, one less than her career high, and the Hornets would blow out West Davidson, 67-42.

“All she needed was to make that one little layup,” Brice said. “Then she was able to let the misses go, and she wound up having a great game. We’re able to play her off the ball more this season, and I think that helped get her going.”

Once Fulson got going, she made everything, including lefty hooks and off-balance jumpers.

When Fulson and just about everyone else was struggling early, senior Bryanna Troutman lifted the Hornets on her shoulders. The last thing Troutman wants to do is shoot a lot, but she didn’t have much choice. If she hasn’t asserted herself, West Davidson (2-1, 0-1), which shoots the ball well, might have opened up a huge lead.

“We were tired from playing in Gastonia on Monday and we had some dead legs,” Troutman said. “We started really slow, so I had to take over some. I was glad that everyone picked it up.”

Troutman had 19 of her 23 points in the first half. Her night also included 15 rebounds and four assists. In the second half, she concentrated on the boards and was content to let Fulson power the offense.

“She showed a lot of maturity,” Brice said. “Early in the game, with her teammates struggling, we needed her to be really aggressive offensively, and she carried us. Once others started scoring, she was happy to to other things.”

The high-water mark for West Davidson came in the middle of the second quarter when a bucket by Anna Tedder and a 3-pointer by Haley Lowe put the Green Dragons ahead, 18-14.

But the rest of the half belonged to the Hornets. They outscored West Davidson 17-3 over the final four minutes to sprint to the locker room with a 31-21 lead.

“(Sophomore guard) Ja’kiya Brown was a sparkplug on defense during that run,” Brice said.

When Fulson nailed one of her three 3-pointers to start the second half, the Hornets’ lead was 13.

It was a 42-30 game late in the third quarter, but Fulson made another 3-pointer. Then a huge swing occurred when Fulson made a steal and put in a layup as she was pushed from behind. An intentional foul was called. Fulson then made two free throws, and Troutman got a quick bucket. The Hornets were up 21, and it was over.

Brice, Fulson and Troutman were pleased with the victory, but they acknowledged the Hornets have a lot of work to do. They’re incorporating a lot of new faces into their rotation. Their teamwork will get better.

“This was only the third game,” Brice said. “We haven’t really meshed yet, haven’t really figured out all the roles yet, but I’m excited about what we can become.”

NOTES: Fulson has 693 career points and could reach 1,000 as a junior. … Troutman has 1,157 career points and is eighth on Salisbury’s all-time scoring list. She’s 10 points behind Gerri Spain (Class of ’81). … Salisbury has a big CCC home matchup with unbeaten Lexington on Friday. … Lowe was averaging 22 points a game, but was held to two field goals and 12 points by the Hornets. Lexi Clontz scored 11 for the Green Dragons. … Robert Hairston is back for another year as a SHS assistant coach. He’s done a lot of winning at Lexington, West Rowan and Salisbury.