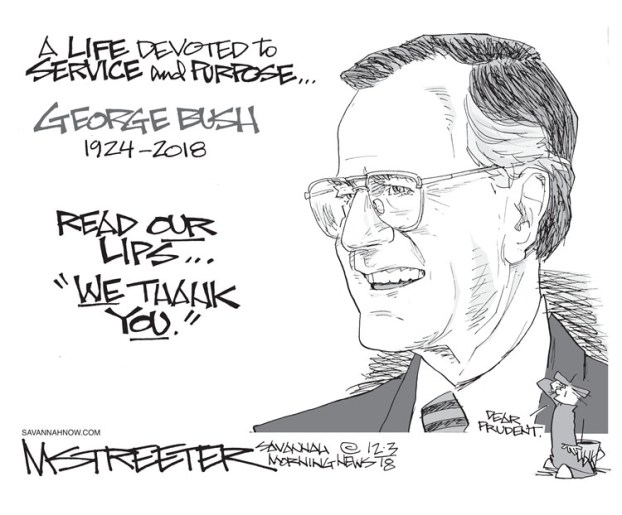 The death of the 41st president will be much mourned this week, his passing serving as a memorial to a seemingly vanished era of temperance and civility in Washington. His “kinder and gentler” style of politics stands in unavoidable contrast to that of the current occupant of the White House. But this should not occlude the main reason to celebrate the life of George Herbert Walker Bush – namely that he was both a patriot and a politician, and understood those roles as intimately connected and complementary.

He sought power for himself, but tried to exercise it for the benefit of others.

Bush enlisted in the Navy at age 18 to fight in World War II. He was soon flying combat missions over the Pacific. In 1944 his plane was shot out of the sky. Bush ejected into the ocean and was eventually rescued by a submarine.

His political career was extraordinary. He served in Congress, the United Nations, and as chairman of the Republican Party under President Richard Nixon. He was the nation’s chief diplomat in China and the head of the Central Intelligence Agency. After eight years as vice president to President Ronald Reagan, he ran for president in 1988 as arguably the most well-prepared candidate in the nation’s history.

As president he launched and won the Gulf War but refrained from marching on Saddam Hussein’s government in Baghdad – an exercise of caution that was criticized at the time but looks wise at this distance. He promised not to raise taxes then approved a budget deal that did, for which many in his party never forgave him. The measure was essential to restore fiscal control. His successor reaped the benefit.

After losing a difficult reelection race to Bill Clinton, Bush’s commitment to public service didn’t waver. He grew gracefully into the role of wise man, and over time he and Clinton became close partners in many notable humanitarian efforts.

Modesty and dedication of the kind Bush exemplified haven’t in fact vanished from American politics. Decency, purpose and patriotic commitment can be found all across the country. But those qualities have receded from the spotlight, because Americans have allowed them to. The best way to honor the legacy of a brave and decent man is to recognize the importance of those virtues, and to demand no less of candidates for public office, high or low.

If Rowan County had one shot at using a time machine, would we go back to 2004 and opt not... read more