A little sluggish, but Salisbury boys prevail on W. Davidson 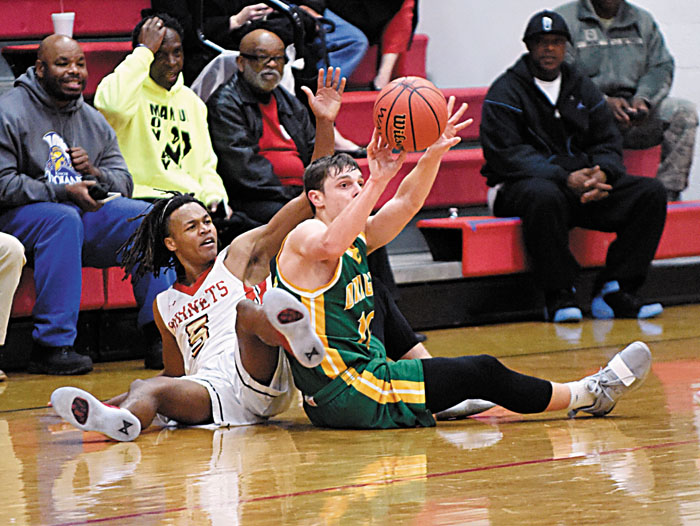 SALISBURY — The following is not a misprint:

“Sometimes you can win and still lose.”

That’s Salisbury boys basketball coach Bryan Withers expounding on Tuesday’s 80-67 CCC victory against visiting West Davidson. The Hornets — who hope to contend for the league championship this winter — made pleasant music at times, but played like an untuned piano at others, and managed to improve to 2-1 overall and 2-0 in conference play.

“I don’t think our effort was there like it has been,” Withers added. “I don’t know if that goes back to playing (Monday) night and getting home at 12:30. But you can’t make up excuses. You just have to play. At their age, they should be able to bounce back quickly.”

It was an uneven performance for SHS, which missed nine of its first 10 free throw attempts. Despite turning the ball over six times in the first quarter, it opened a 10-point lead when senior Cameron Gill snared a rebound and hit a short pull-up from the left baseline with a minute on the clock. Midway through the second period, West Davidson (1-2, 0-1) used Macon Stovall’s 3-pointer from the left side, his subsequent fastbreak layup and two free throws to draw within 26-21.

“It was our defense,” said Salisbury freshman Jalon Walker. “We weren’t switching, weren’t transitioning, weren’t guarding and giving up too many easy baskets. It just wasn’t our best game.”

But suddenly it was, for the last four minutes of the first half when the Hornets righted a rudderless ship and went on a 22-6 scoring spree. Junior guard Zay Kesler led the charge with nine points in a two-and-a-half-minute span, the last two when he yanked down an offensive rebound and and banked home a followup that made it 42-27. “In spurts we showed how good we can be,” said Withers.

Kesler finished with a team-best 15 points and four assists — and drew an admiring eye from Walker.

“He’s such a good spot shooter,” said Walker, one of three Hornets to reach double figures. “He can catch the ball and shoot it. We needed energy in the second quarter and he gave it to us.”

Teammate Kevin Chawlk’s runaway layup at the buzzer gave the Hornets a 21-point advantage at the half.

“I let our kids run what they wanted to run,” said West coach Elliott Pope. “And we went down 21 at halftime. I let them see what happens when we don’t run our system. When we do, we can be successful.”

The Dragons were far better after Kesler’s 3-ball gave Salisbury a 53-31 lead early in the third quarter. The guests went on a 13-2 tear and pulled within 55-44 on a tip-in by Drew Tedder and two free throws from sophomore Jason Hamblin. Joseph Witherspoon stopped the bleeding for the Hornets with a pair of layups before West opened the final quarter with seven unanswered points to close within 59-51.

“We ran our system. They heard what I told them at halftime,” said Pope. “(Salisbury) put us on a running clock two times last season. Tonight we made it a single-digit ballgame in the fourth quarter. We’re a team that needs to grow up. This was a huge step toward that.”

Sounds like a loss that seemed like a win for the Dragons. “We just lost our focus for a while,” said Walker. “We weren’t hustling, weren’t hustling back. Finally we woke up and said, ‘Let’s just do this.'”

Salisbury obliged, in spite of itself. They missed eight of 12 free throws in a five-minute stretch of the fourth quarter, finishing 16-for-33 from the stripe. But they secured the win when Kesler scored on a double-pump layup with 1:06 remaining and four straight free throw conversions by senior Raheim Walker in the last 11.1 seconds.

Afterward, Withers didn’t specifically say it, but you got the feeling this game was an itchy wool sweater that Salisbury never got comfortable wearing.

“I got stubborn,” he said. “When we were up 22 I should have taken (the starters) out, but I wanted to work on our zone stuff. Then we got impatient and everybody wanted to score. We’re a defensive-minded team, but we started thinking too much about offense. That’s not us.”

NOTES: Walker, a 6-3  forward, is the son of Catawba football coach Curtis Walker. He contributed 10 points and nine rebounds. … Junior Jacquez Smith scored 13 of his 14 points in the first half for Salisbury. Injured Bill Fisher, a 6-5 senior, is recovering from August back surgery and has begun light workouts. Withers hopes he can get back for the upcoming Christmas tournament, but believes a January return is more likely. … Salisbury hosts Lexington in a marquee CCC matchup on Friday.