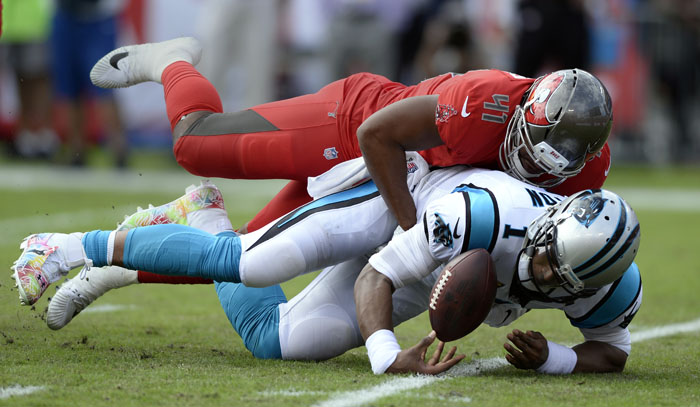 Carolina Panthers quarterback Cam Newton (1) loses the football as he is sacked by Tampa Bay Buccaneers linebacker Kevin Minter (41) during the first half of an NFL football game Sunday, Dec. 2, 2018, in Tampa, Fla. Newton recovered the ball. (AP Photo/Jason Behnken)

TAMPA, Fla. (AP) — Jameis Winston threw for 249 yards and two touchdowns to lead the Tampa Bay Buccaneers to a 24-17 victory over the reeling Carolina Panthers on Sunday.
The Bucs (5-7) won for the second straight time since Winston regained his starting job with team mired in a four-game losing streak.
The fourth-year pro completed 20 of 30 passes. And, for the second week in a row, the 24-year-old quarterback did not turn the ball over.
Meanwhile, Andrew Adams had three of Tampa Bay’s four interceptions off Cam Newton, who came into the game saying he was playing the best football of his career, even though the Panthers (6-6) have lost four straight following a 6-2 start.
Winston threw TD passes of 3 yards to Adam Humphries and 13 yards to Chris Godwin in the first half, moving the No. 1 overall pick from the 2015 draft ahead of Josh Freeman as Tampa Bay’s career touchdown pass leader with 81.
Newton completed 28 of 41 passes for 300 yards and two touchdowns, an 8-yarder to Christian McCaffrey in the first quarter and a 10-yarder to Devin Funchess that finished a 92-yard drive and trimmed a 14-point deficit to 24-17.
A week after setting a Carolina franchise record with 237 total yards from scrimmage, McCaffrey rushed for 106 yards on 10 carries and had nine receptions for 55 yards.
Godwin, starting in place of the injured DeSean Jackson, finished five catches for 101 yards.
The Bucs sacked Newton four times. And after having just one interception in the first 10 games of the season, the Tampa Bay secondary has six in the past two weeks.
Newton has thrown at least two TD passes in 11 straight games, extending his franchise record. The four-interception game matched a career high.

UP NEXT
Panthers: at Cleveland, their fourth road game in five weeks.
Buccaneers: vs. New Orleans, finishing stretch of three consecutive home games.