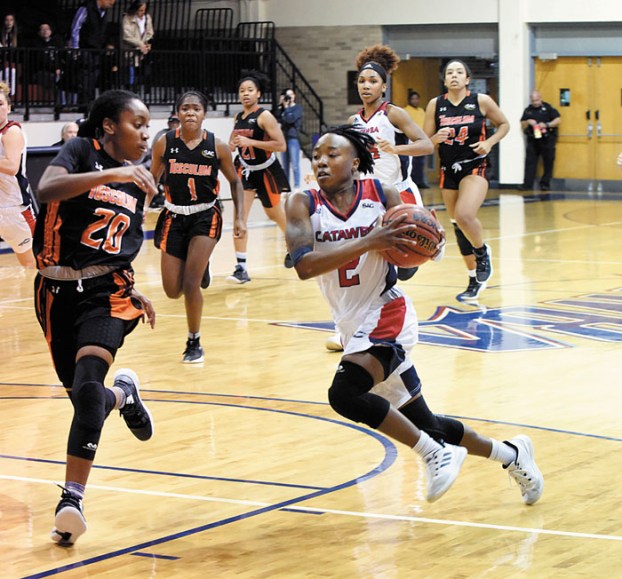 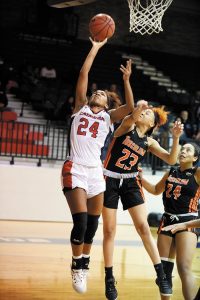 SALISBURY — Catawba’s Talia Barnes and Taisha DeShazo are sophomores who are being asked to play like seniors.

They played “old” on Saturday at Goodman Gym, and the result was a 64-51 South Atlantic Conference win against Tusculum.

Barnes was the game’s toughest and most forceful player. She had 20 points and 13 rebounds and single-handedly got Tusculum’s front court in foul trouble.

DeShazo’s 13 points included two of the pivotal shots of the game.

Junior guard Madi Hallman, who has battled foot ailments almost since arriving at Catawba, also was instrumental in the victory, controlling the tempo and putting 14 points, six assists and six rebounds on the stat sheet. She had to play 33 minutes, a heavier workload than Baxter wants her to handle because lightning-fast point guard Shemya Stanback struggled with foul trouble and turnovers.

“We know if Madi was 100 percent healthy, she’d be an all-conference player, maybe an all-region player,” Baxter said. “She gave us everything she had on both ends of the floor, taking charges, making good decisions.”

Elizabeth Webb made two 3-pointers to help the Indians (3-2, 1-1) get started.  Freshman Mercedes Wampler provided energy off the bench and produced  two key buckets in the second quarter.

“Wampler might have been our MVP today,” Baxter said. “She gave us a boost. She did things that won’t show up on  the stat sheet.”

Catawba had an intelligent defensive game plan, packing it back with five players below the 3-point line and daring Tusculum (4-2, 0-2) to fire away from outside.

“The scouting report was that Tusculum is a whole team of drivers,” Baxter said. “They missed a lot of 3s and we able to help each other on defense and draw some charges. Our offense was hit and miss, but we hung our hats on our defense.”

On one Tusculum drive, both Hallman and DeShazo took a charge simultaneously.

Still, it wasn’t easy because Catawba was sporadic on offense, checking in at 40.9 percent from the field and making only four 3-pointers.

The Indians were clinging to a 22-21 lead in the second quarter when Wampler scored off a Stanback steal, Then Wampler finished a drive for a 26-21 lead.

“We had their big girls in some foul trouble, so I needed to take advantage of it,” Barnes said. “I attacked hard.”

Catawba led 36-24 at the break, but the Pioneers scored the first five points of the second half to get back in it, and Catawba couldn’t relax.

When Yolizma Cupidan hit a 3-pointer for the visitors with 2:06 left in the third quarter, Catawba’s lead was down to 44-39, Tusculum was surging and Catawba looked temporarily discombobulated. On Catawba’s next possession, Webb had to throw up a prayer as the shot clock expired, but she managed to hit the rim and Wampler chased down the long rebound. The shot clock was close to expiring again when DeShazo found herself open on the left wing. She buried the 3-pointer that was the game’s biggest shot. Catawba went up by eight.

“The clock was running down, I was open and that was one of those moments when I needed to look to score,” DeShazo said. “We needed to pick it up.”

Hallman made a free throw for the last point of the third quarter. Catawba was able to take a 48-39 lead to the final eight minutes.

The rebounding battle had been even all day, but Barnes and DeShazo owned the boards in the fourth quarter. Tusculum was one-and-done time and again.

“The go-tos were Barnes and DeShazo, and I was able to get the ball to them,” Hallman said. “There was a lot of pressure, but we did a good job of settling down and doing what we needed to do.”

With seven minutes left, DeShazo sailed in for a beautiful reverse layup that proved to be a backbreaker.

Catawba pulled away after that and led by as many as 18.

This is a young team that’s going to experience ups and downs  over the course of a long season, but Saturday was one of the ups.

“I doubt if there are many teams in the country that have 10 freshmen and sophomores and lots of night we’ll be going up against seniors,” Baxter said.

NOTES: Catawba is still working on what may be a stellar recruiting class. Baxter can’t announce everyone yet, but the Indians have a commitment from Ledford’s outstanding point guard Lyrik Thorne. .. The next game for the Indians is a home tilt against Livingstone on Wednesday at 7 p.m.