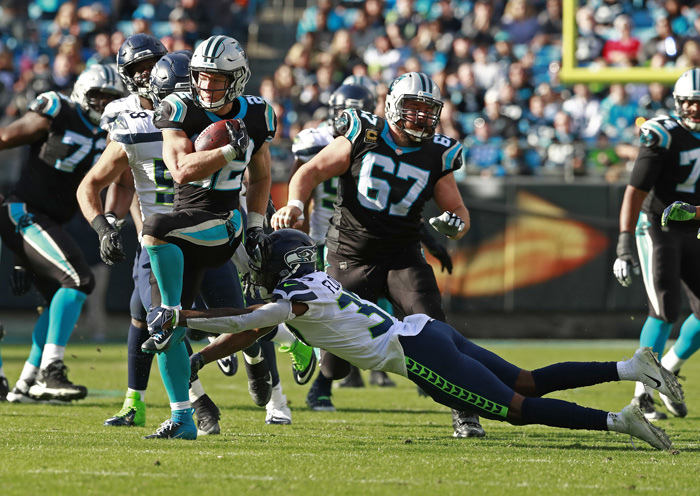 CHARLOTTE (AP) — Tyler Lockett knew if Russell Wilson bought him a few more seconds, he could spring himself for a big play.
Wilson did just that, sidestepping a few pass rushers in the pocket and enabling Lockett to slip behind cornerback Captain Munnerlyn and haul in a 43-yard completion at the Carolina 10. Wilson then took a knee twice and spiked the ball once to set up Sebastian Janikowski’s 31-yard field goal as time expired, allowing the Seattle Seahawks to complete a 30-27 come-from-behind win over the Panthers on Sunday.
“When Russell keeps it alive, we understand how hard it is for defenders to try to guard somebody more than five seconds,” Lockett said. “If it is longer than four or five seconds, it puts us in a better position to get open.”
Wilson threw for 339 yards and two touchdowns, putting the Seahawks (6-5) firmly in contention for an NFC wild card spot. Lockett finished with five catches for 107 yards and a touchdown, while David Moore had four receptions for 103 yards and a score.
Wilson said Lockett was working on a move in Friday’s walkthrough practice where he broke off the play and went deep.
“There was a play where he kind of stuttered and then went. He said, ‘Hey, I’m just working on something, just in case we need it,'” Wilson said of Lockett. “The funny thing is we needed it.”
The Panthers, also 6-5, suddenly find themselves on the outside looking in at the NFC playoff picture after losing three straight and having their 10-game home winning streak snapped. The prospect of Carolina missing the playoffs would have been unimaginable at the beginning of the month.
“Three weeks ago if somebody had said this was going to happen I would have slapped them,” said quarterback Cam Newton, who completed 25 of 30 passes for 256 yards and two touchdowns.
Wilson tied the game with 3:26 remaining when he gambled on a fourth-and-3, lofting a 35-yard touchdown pass to Moore, who beat Corn Elder in the corner of the end zone. Panthers starting cornerback Donte Jackson injured his quad on the first play from scrimmage, which proved to be an issue for Carolina.
Newton completed all 14 pass attempts in the first half for 159 yards, including a 7-yard touchdown pass to Curtis Samuel to give the Panthers a 13-10 lead at halftime. Eight of those passes went to Christian McCaffrey, mostly on check-downs.

ANOTHER BIG MISS
Wilson’s big completion to Lockett came after Graham Gano missed a 52-yard field goal with 1:40 left in the game that would have given the Panthers the lead.
It snapped a remarkable string of 41 straight made field goals at home for Gano, including a 63-yarder earlier this year to beat the New York Giants.
“It’s really, really frustrating,” Gano said. “I’ve got the leg to make those kicks, that’s why it’s a tough one to swallow. They’ve got the faith in me to kick them from far, so I’ve got to go out there and make them.”
It’s the second straight week Gano has let the Panthers down. Last week against Detroit, he missed a field goal and an extra point in a 20-19 loss.

WASTED DAY
The Panthers spoiled a record-setting performance from McCaffrey, who had a franchise-record 239 yards from scrimmage and two more touchdowns. He had 17 carries for 125 yards and 11 catches for 114 yards, becoming the first Carolina player to surpass 100 yards in both receiving and rushing in the same game.
“That’s all great but I would rather win,” McCaffrey said. “It sucks when you lose. A lot of guys played well and those ones hurt.”
Said Seahawks coach Pete Carroll: “McCaffrey was awesome. Cam was awesome. But when they got into the red zone, we stopped them. We had four big stops, and they were all crucial.”

CARSON CARRIES THE LOAD
Chris Carson got the bulk of the carries for the Seahawks’ No. 1-ranked rushing attack, carrying 16 times for 55 yards and a 1-yard touchdown . He had a remarkable 15-yard run on which he nailed the landing — and kept running — after getting flipped on a low tackle by Panthers safety Eric Reid.
Overall, Seattle gained just 75 yards on the ground — about half of what they normally average.
“Luke Kuechly is one of the best linebackers in the game, so you know he’s going to make a couple plays,” Carson said. “For the most part we did what we could do in the run game.”

NATIONAL ANTHEM
Reid continued his protest of racial and social injustice by kneeling during the national anthem. Seattle defensive tackle Quinton Jefferson and offensive tackle Duane Brown remained in the tunnel for the anthem as they have in previous weeks.

INJURIES
Seahawks: Doug Baldwin (groin) was a game-time decision, but played for Seattle and had five catches for 39 yards. … Fullback Tre Madden left in the second half with a shoulder injury.
Panthers: Jackson did not return after his quadriceps injury. … Punt returner Damiere Byrd left the game with an arm injury in the first half and did not return. … Wide receiver Devin Funchess (back) did not play.