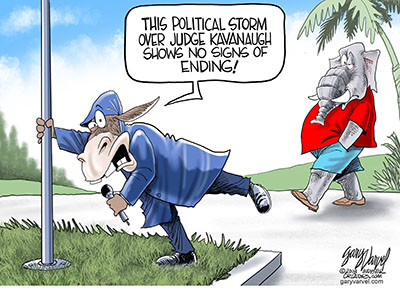 Though many races for Congress were close, much seems to be missing in the media’s analysis, as well as appraisals by both parties. Some might believe that the confirmation of Brett M. Kavanaugh to the U.S. Supreme Court as well as the Central American migrant caravan seeking entry into the U.S. were major factors in the Republican fortunes, but that might be too simple.

Turnout is the key to any election success, but such must be braced by overarching issues of importance to the welfare of the nation. President Trump made the elections about him both in his advocacy for certain candidates as well as his political rhetoric. But missed by too many was the religious pulse pulling at the hearts of many pronounced as “deplorables” by Hillary Clinton and those who have pushed aside personal beliefs for self-pleasure and decadence allow by “New Age” philosophies.

The Rev. Charles Stanley repeatedly asked in his Sunday messages, “Who will stand with God?” Many are trying to find their way back to their religious roots, where marriage is seen as between one man and one woman, the unborn are revered, God is the center of their lives and authority over children rests with the family, not the government. Witness the winning candidacy of the Rev. Dr. Mark Harris in the 9th District, where millions of dollars were thrown against him citing his sermons in this regard. Have you seen the yard signs stating, “Thank You Jesus?”

The rebellion against a globalist vision is just getting started, and self-proclaimed Trump nationalists want to put the nation and its citizens first. Such does not make them “white nationalists,” but places them in a protectionist mode favoring citizens, not those demanding this nation share its wealth or create space for those wanting economic opportunity rather than seeking political asylum via assimilation into a national ethos.

It is this drive which led to North Carolina’s passage of four pieces of legislation which do just that, including requiring voter identification to vote while providing free acceptable ID cards for this purpose. This fuels anti-open borders concerns, which will continue to be a defining issue for 2020. This also wouldn’t allow votes by illegal immigrants. Every vote of citizens is important and shouldn’t be diluted by those with no legal right to vote or be here.

The failure of the black vote to deliver resounding victories in key areas misses an important reality — the growth of Hispanic/Latino community continues to have a negative impact on Republicans’ electability. Coalition building sounds good, but will it work? The Democrats have not delivered, and the Republicans aren’t focused on identity politics at that level.

The restoration of media credibility is essential to a democratic society. A free press must tell both sides of the story without endless editorializing. Just the facts and let the people decide what to believe.

An impartial, constitutionally based judiciary is also essential to a free democratic society. It is foreseen that the high court may have two vacancies to fill in the foreseeable future. The conservative leanings for judicial picks will again cause outrage, but so too would liberal leanings.

Violent outbursts in protest of government policies are disturbing. The recent demonstrations at the residence of Fox TV’s Tucker Carlson should not be tolerated, and no man or woman should be made to be afraid in his person for doing his job. Those folks, as well as politicians who advocate getting in the faces of people with whom you disagree, should face criminal charges.

After all of this, what wasn’t adequately dealt with in our recent elections was a discussions of necessary cuts in spending, for you can’t continue giving away things which there isn’t money to provide. What is a responsible view of health care? Who should be eligible for food stamps particularly when they live above the poverty level? What is a livable wage when the work leaves a lot to be desired or is not market driven? Why should the government be responsible for ones retirement welfare?

Trump 2020 may seem formidable to many, but Republicans need not fall asleep at the switch. The revived interest reportedly of Hillary Clinton running in 2020 would do the Democrats in. Investigations must be had into the Uranium 1 acquisition by Russia at the hands of the Clinton Foundation. The verbal badgering of women must end with assault of such taken seriously.

Lest we continue on the path of party dominance by rich candidates, changes to laws on political donations as well as the influence of PACs must happen — the Soros and Koch foundations are two groups with an outsize impact on election outcomes; they must be reined in. The rules on who may run for president should require full and public disclosure of holdings to prevent conflicts of interest.

Dr. Ada M. Fisher of Salisbury is a licensed teacher, author of “Common Sense Conservative Prescriptions: Good for What Ails Us,” is the N.C. Republican National Committeewoman. Contact her through DrAdaMFisher.org

“You’ll recognize him. He’ll be the loudest, happiest one in the parade.” — Susan Steele, whose son Parker wore a... read more