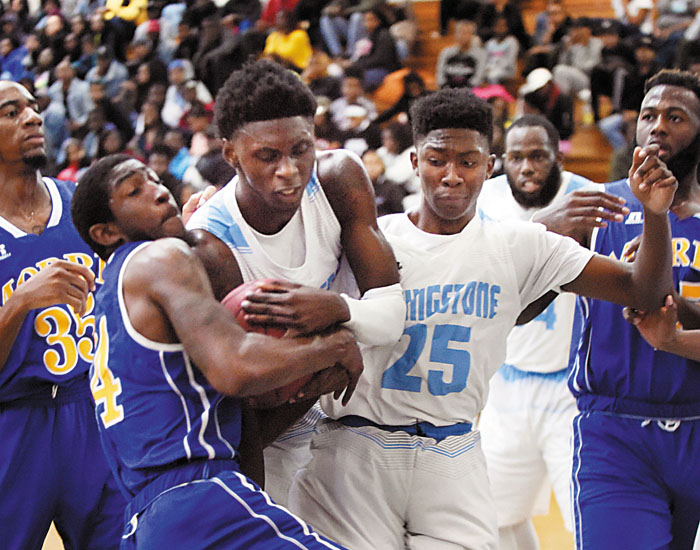 Livingstone's Navar Elmore 1 and Morris's Demitruis Holiday 24 tie up with Anthony Tate 25 on the right.. photo by Wayne Hinshaw, for the Salisbury Post

SALISBURY — A lot of college basketball coaches are talking butterflies and unicorns this time of year. Livingstone’s James Stinson is not.

Never mind the Blue Bears’ pedestrian 2-1 start this season. What Stinson sees is a work-in-progress that still needs work.

“The focus has to be on taking it one game at a time,” he said, following an early-week practice. “We have to prepare for what’s right in front of us. We can’t be looking ahead all the time, like we did last year.”

Gone from the 2017-18 squad that went 12-13 overall, placed third in the CIAA’s Southern Division and advanced to the conference tournament quarterfinals are three vital parts — shooting guards Cameron Burhannon and Ramel Belfield and pass-first distributor Sam McClendon. Each has moved on, leaving a void that will be difficult to fill.

“You can’t totally replace those guys,” said Stinson, now in his 15th season on Monroe Street. “But you can get people in who help move your program forward. Last year was last year. We started three freshman and a sophomore. Those players have grown up.”

That’s enough to provide cautious optimism for Livingstone, which likely is playing its final season at charismatic New Trent Gym. A new facility currently under construction is expected to open next season.

“We’re hoping to leave our mark on this place,” said junior guard Roger Ray, one of seven returning lettermen on LC’s 17-man roster. “This may be the best team we’ve had since I got here. Once we get the jitters out, this team is ready to go.”

Ray is the man with the keys. A 5-foot-9 shot of Red Bull, he averaged a team-best 16.3 points-per-game last season and knocked down 34 3-pointers — second only to Belfield’s 49 — and earned all-conference honors. This year he’s an all-CIAA pre-season pick.

“Actually, we have five kids that have to step up,” Stinson is quick to point out. “They don’t need to do amazing things, but they’ll have to show the leadership qualities I know are within them. Every team has question marks. I want to see if our sophomores can accept their roles and lead a little bit. They can’t keep saying, ‘Let the juniors and seniors do it.’ It’s their time to show what they can do.”

Among those returning sophomores are 6-foot-10 twins Navar and Lydell Elmore, the prizes of last season’s recruiting class. Navar started 17 games, shot 45 percent from the field and blocked 38 shots. But he rebounded with less-than-expected ferocity (3.1 rpg) and was too often a non-factor. Lydell, who contributed 21 points in Wednesday’s win against Morris, averaged 6.8 points and 4.2 rebounds per outing as a first-year player.

“We expect the twins to be better, at least in the rebounding aspect,” Stinson said. “We want them to capitalize on their length, contest shots and maybe score 10-12 points apiece.”

All will contribute, but Stinson may have unearthed a pearl of a player in 6-10 forward Kenny Grant — a New Jersey native and transfer from Division I Rider University. He posted his first double-double in Wednesday’s triumph.

“We’ve got the young guys, the sophomores, the twins and some new transfers,” said second-year forward Damante McNeill, one of two Livingstone seniors. “We’re together, we’re focused and we want to win. This team can score with anybody, but we’ve got to lock in and take more pride in our defense.”

Other lettermen include juniors Jalon Lewis and Ja’Corey Livingston, invaluable pieces off the bench. Stinson is also keen on Malik Dupree — a 6-9, 245-pound freshman who sat out last season — as well as 6-6 freshman Tyrik Dawson, freshman guard O’Koye Parker and transfer Martel Handley, a junior shooting guard who attended the same junior college as 2015 hero Mark Thomas. Austin Harris, a 6-3 senior who played for Livingstone’s CIAA championship team, returns after sitting out the past two winters.

Throw it all in the blender and you’ve got a team that’s more resourceful than scary. A pre-season coach’s poll picked the Blue Bears to place fifth in the seven-team Southern Division, but Stinson believes second or third is a reachable landing spot.

“Our division is loaded, but that’s neither here nor there,” he said. “Shaw is top of the line and they’re the favorites, as well they should be. They’ve got a DI transfer from Oklahoma State (dunk specialist Davon Dillard). Winston-Salem returns everybody and J.C. Smith has brought in some very good pieces. Our work is cut out for us. We just have to come to play and be one-point better every night. That’s all we need.”