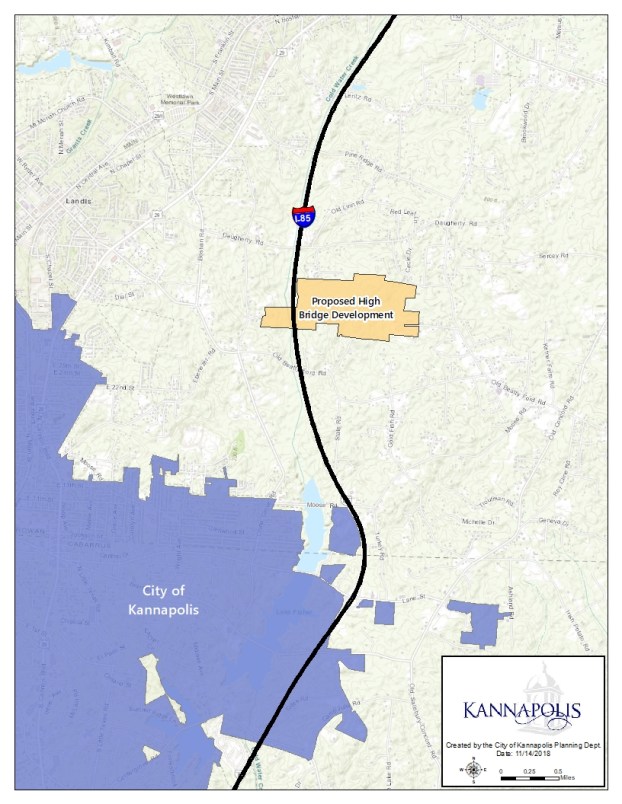 Kannapolis next to consider agreement on utilities for interchange property

KANNAPOLIS — One day after the Rowan County commissioners signed an agreement to bring water and sewer service to the Old Beatty Ford interchange, Kannapolis officials said their City Council will consider the agreement at its Nov. 26 meeting.

The agreement could result in the annexation of property by Kannapolis and extension of municipal utilities to the new interchange off Interstate 85.

Louisiana-based Commercial Properties Realty Trust approached Rowan County and the city regarding a large mixed-use development along the interchange. The site, which will include medical, office, commercial and residential developments, will be on 318 acres of property.

The property is approximately one mile from the current city limits of Kannapolis. This, along with its topography, were the determining factors leading to the arrangement for Kannapolis to extend the utilities to this site.

“The extension of water and sewer lines to the interchange would enable the city and southern Rowan County to have another economic development opportunity in this area,” said Kannapolis City Manager Mike Legg. “We view this location as a potential major economic anchor and job creation node in our city and in southern Rowan County.”

Legg said that interstate interchanges are limited in number, and that makes them attractive to companies and real estate investors.

Kannapolis Mayor Darrel Hinnant said the development could be “very beneficial for all of us,” including Kannapolis and Rowan County as well as Landis and China Grove.

“This is an opportunity for the municipalities to market the area to potential companies who would bring jobs and economic opportunities to our cities. Having utilities at the site gives us an economic advantage at this location,” said Hinnant. “We appreciate the Rowan County Board of Commissioners and our southern Rowan County neighbors working with us to ensure we bring this economic development project to Rowan County.”

As part of the agreement, Rowan County will pay Kannapolis $1 million in cash, forego the remaining debt that exists for a previous purchase of the current Intimidators Stadium and work with the city to provide tax incentives to qualifying companies that would create jobs at the interchange. These commitments are designed to help support the city’s cost of extending water and sewer service.

A pending development agreement between the city of Kannapolis and Commercial Properties Realty Trust will define timeframes, the financial commitment of the developer, development plans for the property and other details of the project. It is anticipated that the project will result in substantial private investments in southern Rowan County.

The Rowan County commissioners voted to approve the agreement during a called meeting Tuesday. The Kannapolis City Council will vote on the agreement on Nov. 26.

KANNAPOLIS — A man was killed Wednesday morning when he was struck by a train near Ridge Avenue and D... read more