In the Trenches: Landfill attendant weighs in with cheerful outlook on life 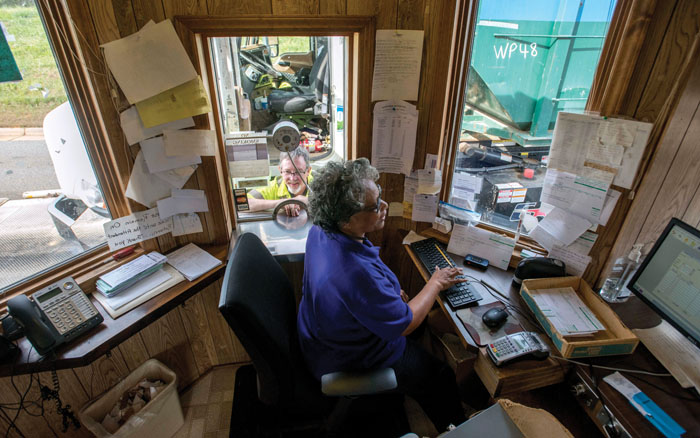 WOODLEAF — Thirty years ago, Catherine Allison wanted to be a surveyor. She was studying drafting at Rowan Tech and already looking for a job.

“I went to church with Mayor Wiley Lash,” she says. “He told me about this job. I wanted to be a surveyor, but Mayor Lash said, ‘You have to get your foot in the door.” So I applied and got it.”

“This job” is scale-house attendant at the Rowan County landfill. Allison charges landfill users by how much their garbage weighs. She also takes calls and answers questions.

“When I started, we didn’t have this building,” Allison says. “It was an 8-by-8-foot shack. I had a little heater, and there was an AC stuck in the wall. There was no running water. I had to use a Porta-John outside.”

Today, the office is a 70-by-16-foot building with permanent heating and air — and a restroom.

She eventually did get offers to be a draftsman, but most of those jobs were out of town. She stayed put.

“We used to see 125 trucks a day, but now it’s 200. Busy every day. We used to be really slow, even slower in rain. Now it’s busy all the time. Seems today like rain just brings people out.”

“Trash is good even when things are bad,” he said.

A typical days starts at 7:30 a.m. with a line out the gate and ends at 4 p.m. or when the last vehicle has been served. Boyd says people bring household refuse and construction waste: wood, shingles, concrete, block, brick.

The proportion is about 65 percent commercial loads with the remainder being from homeowners and construction companies. Rates range from the minimum $5.10 to more than $5,000.

“If someone’s tearing down a house,” Boyd says, “nine or 10 truckloads, we hold a check and add up the weights.”

If you do the math, 200 customers divided by eight hours a day is 25 customers every hour.

“Yep, I’ve got to get them through fast,” Allison says with a smile. “There may be one stalled or doesn’t have money, wants to ask questions, he’s holding up everyone in the line. But you can’t rush them. Traffic can back up and line up on the road, so it’s a balancing act. You’ve got the phone ringing, people want to talk to you, some sweet old lonely woman wanting to talk. You just handle it.”

Her most popular call? She bursts out laughing. When it rains, people call to ask if it’s muddy at the landfill.

Customers may call Allison “Honey” or “Sweetie.” Many even bring her sausage biscuits, candy bars, any little token to make her day brighter.

“One customer said he’d just gone fishing and thrown his crappie back in the water. I said, ‘Don’t do that!’ and he began giving them to me. After that, he would sometimes leave a bucket of crappie on my driveway.”

Another customer gave her a 50-cent piece and told her as long as she kept it, she’d never be broke.

“I really like the ones who tell me to have a blessed day. That really makes my day. It’s all I need.”

She recalls a couple of times when customers wanted their trash back.

“I felt so sorry for this little lady; she was crying. She had put her $3,000 diamond ring in the garbage and wanted to look through the landfill. I had to tell her, ‘I’m sorry, you’ll never find it.’”

“Another time a guy lost his passport and had to have it to get home to India that night. That’s a bad day, but it’s totally out of my hands. He kept saying, ‘Can I go through all the garbage, please?’ but safety-wise, we couldn’t let him.”

Of course, some customers are rude.

“Your day is never boring,” Allison says. “I just laugh and go on.”

She remembers one angry customer in particular.

“First day we moved out here (to the new building) and he didn’t think he had to pay. I explained, yes, he had to pay. So he took this $5 bill and threw it at me. I just picked it up, straightened it out and thanked him.”

“Another man didn’t want to pay so he went back, got his trash back, and took it back home.”

Allison remembers all this with a serene smile, as if nothing could shake her. With similar strength, she remembers growing up in two families as being a blessing, not a tough childhood.

“When my mother passed, I was 12 or 13. Her best friend adopted me. Both families were just chipper and happy. All my brothers and sisters loved to pick and play. The new family always kept something going. We were just a happy family.”

Her siblings were farmed out among family and friends when their mother died, but Allison has no regrets.

“We’re close today. Everyone gets together at Christmas time, at my house. We are all good cooks. My whole family cooks. My brother was a chef at Boston Medical Hospital until he came back home. You just name it, I can cook it; they love it. … My grandchildren walk in and ask, ‘Mawmaw, what you cooking today?’

“One Christmas we had a cook-off. I bought trophies. Some made chicken wings, two made fried chicken, some made Boston butt, some made corn on the grill. It was hilarious. We need to do that again.

“Growing up how we were raised, we were not rich or had anything. Our parents tell my kids and grandkids, ‘We ate what our mother cooked.’ That’s how we were brought up. They brought us up to be happy for what we got. We were satisfied with what we got.”

Allison has been married to David Allison for 48 years.

“Oh, Lord, he’s a trip,” she laughs. “That’s why I fell in love with him. He was a caring person, very caring. Very helpful — he loves to help people. He’s right there. He’s smart. Came from a well-known family, brought up well, churched well.”

Allison clearly loves her co-workers and remembers the day they jacked up the building to move it — with her still inside. She ran to the door and screamed, “Stop!” They laughed, set down the building and let her out.

“The guys here are a trip. They’ll keep you laughing all day. They respect me, and I respect them. I’m the only woman, and they treat me just like one of the guys. But they respect me as a female.”

Allison plans to retire in January. She says she’s not emotional yet.

Boyd says he is.

“She’s going to be tough to replace,” he says. “She’s pretty steady all the time. She’s the same all day, always smiling, always got a good attitude. She’s always upbeat. I’m going to miss her.”