Al Hunt: In the White House, experience really does count 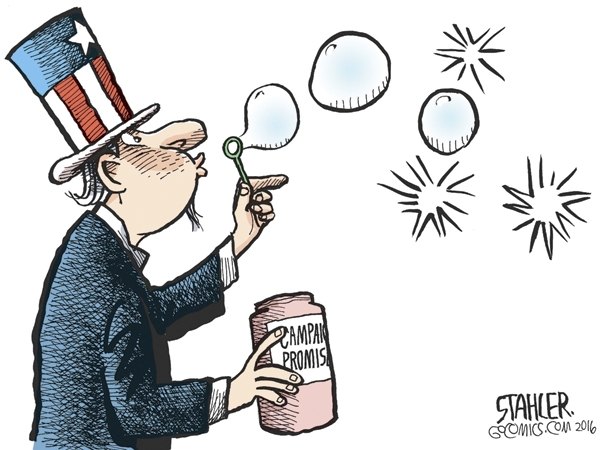 I covered a lot of campaigns this year and none was more exciting than Beto O’Rourke’s race for a U.S. senate seat in Texas. Richard Ojeda, an old-fashioned blue-collar Democratic House contender trying to persuade West Virginians to return to their political roots, was compelling, too. I was disappointed that both lost.

I’ve never met Howard Schultz, the former chairman of Starbucks, but he’s on my list of most admirable American chief executives. (I rarely miss a day at Starbucks.)

All three have signaled their interest in running for president in 2020. For all of them, it’s a bad idea. I want someone in the White House with experience and expertise in politics and governance.

O’Rourke, a Democrat, has served three terms in the House and was a city council member in El Paso, Texas, but lost his only statewide run. Ojeda is a one-term state legislator. Schultz has not run for public office at all. All three have valuable contributions to make, but no persuasive claim on the White House.

To those who question this premise, here’s a three-word response: President Donald Trump. Americans are paying an enormous price for electing a man who knows little and cares less about governance or politics. He’s hurting the country and the Republican Party he’s supposed to lead. After the electoral drubbing Republicans took last week as voters turned out in record numbers to register their disapproval of him, his analysis amounted to criticizing GOP candidates who lost on grounds that they “should have known that without Trump they were nothing.”

Democrats will have a robust 2020 presidential field. The most successful presidential candidates in modern times, Ronald Reagan and Barack Obama, had different levels of governing experience, but both won their parties’ nods against unusually big and heavyweight fields. Reagan had been a two-term California governor by the time he defeated Howard Baker, George W. Bush and John Connally in 1980. Obama, while still in his first term as a U.S. senator following seven years in the Illinois senate, dispatched Hillary Clinton, Joe Biden and John Edwards in 2008.

There are things to criticize about any of today’s major Democratic contenders. Maybe Biden has been around the track too much. Perhaps Sen. Elizabeth Warren, D-Mass., is too liberal to win. Michael Bloomberg, the former mayor of New York City and founder of Bloomberg LP, parent company of Bloomberg Opinion, might struggle for support among the activist Democrats who tend to vote in primaries. Ex-Mayor Mitch Landrieu, D, of New Orleans hails from Cajun country, not normally a launching pad for national office.

But they and a number of others know about governance and politics and have succeeded at high government executive or legislative office.

Until the incumbent, there was only one 20th- or 21st-century president who lacked that kind of background: Dwight D. Eisenhower. But he was supreme allied commander in World War II, dealing and negotiating with giants like Franklin D. Roosevelt, Winston Churchill and Joseph Stalin and, on the military side, Bernard Montgomery, George Patton and Red Army General Georgy Zhukov. That was pretty good preparation to be a world political leader.

The presidency requires some skills that don’t come naturally to newcomers. Even shrewd politicos like Bill Clinton made big rookie mistakes in the White House. If you haven’t played at a high level, the Oval Office is not the venue for on-the-job training.

The clamor to find a shining knight who’s not tainted by politics is dangerously naive. In any field, knowledge and experience matter. If a leading neurosurgeon is leaving your hospital, do you want fresh hands with no surgical background? The New York Giants are a terrible football team this year; should they turn the coaching reins over to a financial executive or a state legislator?

The stakes for picking a president are larger. The past two years shows the perils of inexperience – and in this case also ignorance – when it comes to filling the most powerful post in the world.

Hunt is a Bloomberg Opinion columnist covering politics and policy. He was the executive editor of Bloomberg News, before which he worked for the Wall Street Journal.

Georgie Ann Geyer: Remembrance in the midst of endless…