‘The Month of Their Ripening” a harvest of good things 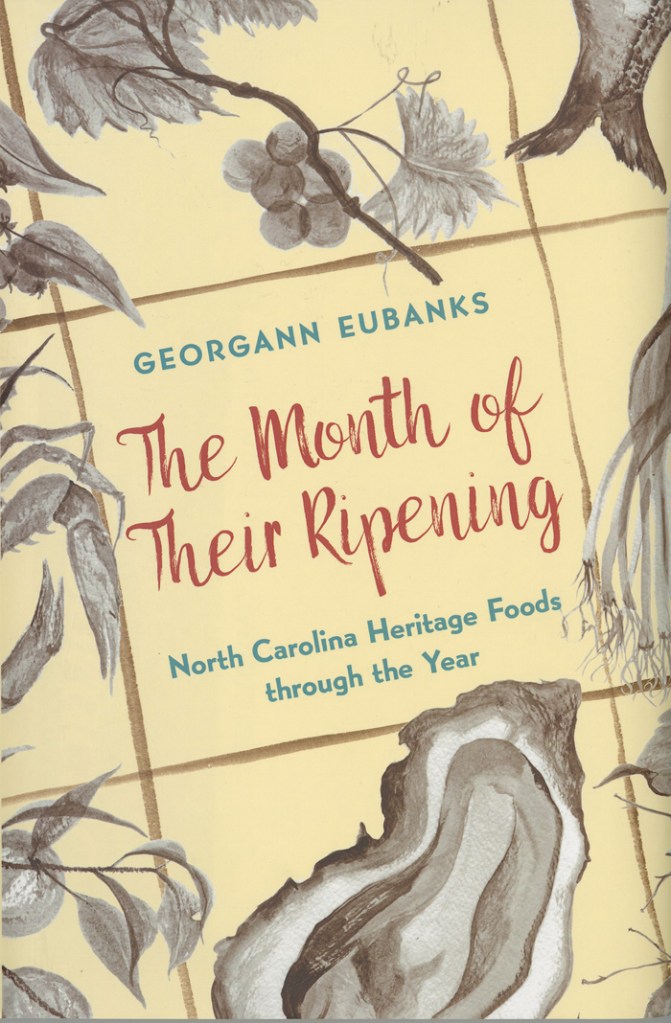 Striving  to maintain tradition and make North Carolinians aware of the bounty of their land, Georgann Eubanks has written a reverent tribute, “The Month of Their Ripening: North Carolina Heritage Foods through the Year.”

She treats 12 foods with care, telling not just their history, but also about the people and places vital to our enjoyment of them. The people —farmers, scientists, homemakers, professors, fishermen — are shown respect and admiration. They extol the virtues of ramps or oysters or persimmon, and do what they can to make them sustainable. It’s a fine line between supply and demand, a finer one between love and loving food to death.

This is not a cookbook, although some recipes are in here. It’s a collection of stories giving the reader reasons to care about and protect what we have here.

The book contains 12 essays, starting with a surprising choice: snow. Why? Snow cream, of course, the rare treat kids long for, the one grandmothers and mothers made when enough snow fell. Eubanks shares the memories of several people, including Johnny Cash’s bass player, Marshall Grant, who remembered a trip with Cash over the Soco Gap in the mountains. It was snowing, and they bought all the ingredients and a metal dishpan, made a fine pan full and sat on a park bench until a friendly bear caught a whiff.

February extols goat’s milk, used as a food and in gentle soaps and lotions. Goat’s milk is good for people who have trouble digesting cow’s milk. Goat cheese is something of a delicacy around the state, with dedicated cheesemakers trying new things. Author and poet Carl Sandburg, who settled in Flat Rock, is part of the story. His wife was a well-known goat breeder and researcher.

Down in eastern North Carolina, shad were over-harvested in the 1930s and 1960s, but it is making a slow comeback. Shad is better for you than salmon, with plenty of healthy fats. It can be “deep fried, roasted on a cedar plank (usually accompanied by bacon), slow-baked or pressure-cooked until the bones dissolve,” Eubanks writes. This entry includes a story about a judge in Trenton, a colorful character with tales to tell. Their shad feast is one to remember.

By April, it’s time for ramps, the garlicky oniony plant that grows in the mountains. Ramps were a Cherokee delicacy, but their popularity now, combined with the short season, is making them harder to find.

Eubanks talks to people who know how to harvest the plant without pulling up the roots, so it can grow again next season. She bemoans, though, that many people pull the entire plant from the ground and have destroyed once-thriving patches. Eubanks and Campbell enjoy ramps with a beef filet, with scrambled eggs, and later at the Knife and Fork restaurant in Spruce Pine in Mitchell County.

People will stand in line for soft-shelled crabs. The book details the lengths fishermen go to harvest the crabs at the precise moment, using special tanks and watching the crabs 24 hours a day to get them at peak quality. Most of North Carolina’s soft-shell crabs go elsewhere, to a processing house in Maryland and on to New York restaurants.

Here, Eubanks emphasizes the hard work and the dwindling number of people willing to do it. Eubanks and Campbell travel to several restaurants on the coast to try out the crab and discover rice flour makes the best batter.

Have you ever seen a serviceberry? Likely you have and didn’t know it. The trees are native to North Carolina and show up in forests thanks to the birds. The berries are actually pomes, related to apples and pears. The trees are shapely, grow well and bloom early in the spring.

Birds love the berries, but humans do too, if they can get to them first. The trees also grow in Canada, where the berries are used in pies, tarts, scones, muffins, breads — anywhere a berry would taste good.

What is the food for July? Cantaloupes, of course, along with great stories of farmers who grow them, including Richard Holtzman Jr., the last major grower of the Ridgeway cantaloupe, prized for its flavor. The most popular cantaloupe grown in the state is a hybrid, Athena, which is wilt- and mildew-resistant. It has a tough rind that ships well and is unlikely to split. For secrets about where to get delicious melons, be sure to read this chapter.

August is dedicated to figs, a fruit many have never tasted fresh. A fig is a flower turned inward, producing beautiful pink flesh and seeds. The fig has ancient origins. Brown turkey and Celeste figs are most plentiful now. They key is to pick them before the birds, ants, bees, deer, fox, rabbits, what have you, take their share. They are highly perishable and the season is short. That’s why your fig experience has probably been limited to preserves and cookie filling.

And while we’re thinking of sweet, sticky fruit, September brings scuppernong grapes, which have also been around for ages. Today, you’ll find scuppernongs in wine, particularly in the eastern part of the state, where the vines thrive. Native Americans used scuppernongs as food, as did the white invaders, English settlers. We get to meet the indomitable Clara Brickhouse, with her marvelous garden full of scuppernongs, Concord grapes and blueberries.

Apples are October’s fruit, and Eubanks and Campbell had a great time tasting all the varieties, some familiar and some with names like King Luscious and Junaluskee, a variety with yellow flesh that ripened late and was popular in the 19th century.

Eubanks’ ode to the persimmon includes this advice: “American persimmons (Dyopyros virginiana) are a prime example of a food that requires us to confront our human place in the bigger scheme of ecology. You can’t plant a grove of American persimmon trees and expect to reap a reliable crop in a decade.”

You’ll learn how persimmon wood is hard and beautiful, how the seeds, sliced open, can predict the winter, and how the once-plentiful tree is slowly being eradicated. Here, too, the people of the persimmon are a fascinating crew.

To finish out the year, Eubanks dives into the complexities of the oyster, from those who love ‘em and those who hate ‘em, to the best ways to eat them, the best places to find them, and the culture of the fishermen who harvest them.

The book moves along at a leisurely pace as Eubanks takes her time with each subject, telling lots of stories about people you’d never meet otherwise. Whatever you think you know about our native goods, you’ll learn more interesting facts and theories.

This is a book for a food lover, someone who has respect for the land and respect for local foods and the local people who raise them, or who collect snow for snow cream, or wait in the dark, wee hours for a crab to shed its shell.

Pick it up, read a chapter, find the food of the month and experiment. You’l be glad Eubanks pointed you in that direction.

Peggy Barnhardt: Are you getting the old heave-ho?