Cokie and Steven Roberts: What happens to Trumpism now? 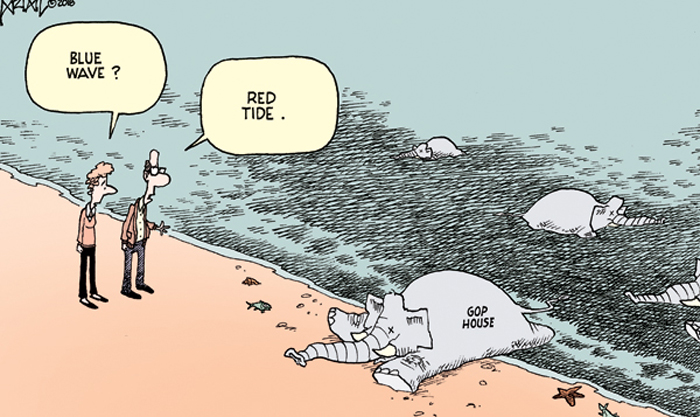 Now that Democrats have won the House majority by a slim margin, what happens next? Their power to shape legislation will be limited, but that’s not the whole story.

Democrats now take over the chairmanship of every House committee, and that means more money to hire staff and conduct investigations; more power to hold hearings, summon witnesses, ask questions and demand answers. The single most important change can be summed up in one word: subpoena.

Thanks to a rule passed by House Republicans, committee chairs can issue subpoenas without consulting minority members. And for months, Democratic leaders have been assembling a list of targets, just in case they took command.

It’s extremely important for Democrats to handle their new power carefully and responsibly. Otherwise it could blow up in their face and hand Trump a prime issue. Former Democratic Congressman Henry Waxman, who ran the Oversight Committee when his party last controlled the House, stressed that point in a pre-election interview with The Washington Post.

“Any investigation that looks like it’s just a political witch hunt or for partisan purposes will not be credible,” he warned. “If subpoenas are issued wildly and it’s not clear what they’re getting at, I think the Democrats would open themselves to attacks from President Trump.”

The president sharpened that threat, warning Democrats that the Senate could investigate them for leaking classified material. “Two can play that game!” he tweeted.

Still, at the top of the Democratic list are Trump’s tax returns, which he has refused to release in defiance of long-standing practice by presidents of both parties. The White House would almost certainly resist the Democrats’ request, but the resulting court battle would only reinforce a ringing battle cry for the next campaign: “What does he have to hide?”

Another key target: records relating to Trump family business dealings with Russian oligarchs. Rep. Adam Schiff of California, due to become chairman of the Intelligence Committee, wrote in the Post: “There are serious and credible allegations the Russians may possess financial leverage over the president, including perhaps the laundering of Russian money through his businesses. It would be negligent to our national security not to find out.”

Waxman suggests Democrats focus on a critically important issue that has gone largely unnoticed in a capital consumed by daily tweets and tempests: Trump’s campaign to overturn regulations of all sorts. He’s gone after regulations that protect consumers from fraud, voters from discrimination, public lands from exploitation and rare wildlife from extinction.

As Waxman told the Post, this oversight “will draw attention to the failure of people in this administration to enforce the laws that are on the books, which have very legitimate and essential purposes behind them.”

The most inflammatory issue, of course, is impeachment, and left-wing red-hots are already demanding the president’s head. But at least for now, the case for removing Trump is pretty weak.

That could change once Special Counsel Robert Mueller issues his report, especially if he accuses the president of obstructing justice. But as Republicans learned when they tried and failed to remove Bill Clinton from office, voters do not look kindly on politicians who seek to overturn the results of an election, unless the evidence is airtight and overwhelming.

On the legislative front, the most likely outcome of the election is even more paralysis, but a few areas of agreement are possible. One is an infrastructure bill, since lawmakers from both parties love to spend money and don’t seem the least bit concerned about the deficit.

Two other issues commanded some bipartisan support in the last Congress and could return to the agenda in January: a measure to protect Mueller from being fired by the president and legal status for young immigrants who came to this country as children but remain undocumented.

The single most important result of the election, however, might be symbolic. Trump himself said, “In a certain way, I am on the ballot.” And in a certain way, the man who prizes winning above all else clearly lost.

The Democrats’ victory was a vote of no-confidence in the president, a repudiation of a campaign laced with fear and falsehoods and a deep dent in his myth of invincibility as his 2020 re-election campaign begins. “One election won’t eliminate racism, sexism or homophobia,” Barack Obama noted on election eve, “but it will be a start.”

Trumpism, in all its insidious and incendiary forms, has dominated our public life for too long. The elections this week could mark the beginning of its decline.