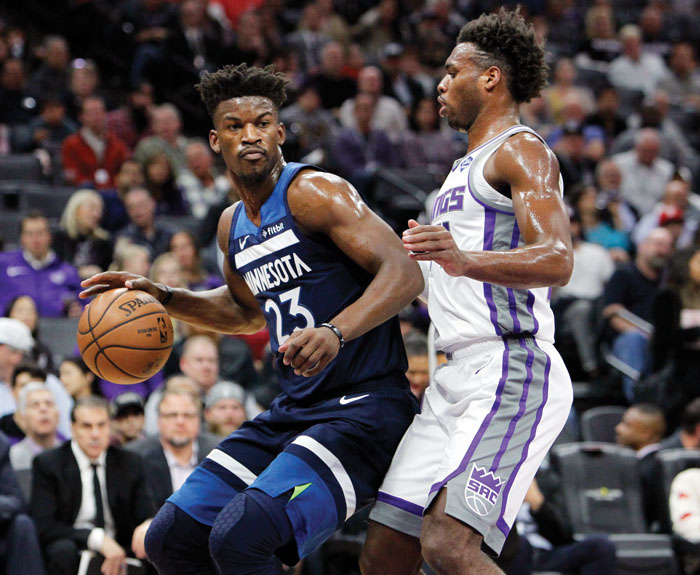 By DAN GELSTON, AP Sports Writer
Jimmy Butler has his wish: He’s out of Minnesota.
And just like that, Philadelphia has a new Big Three — one that could make serious noise in the Eastern Conference.
A person with knowledge of the situation said Saturday that Butler is being traded to the 76ers in a package that will send Dario Saric and Robert Covington to the Timberwolves. The person spoke to The Associated Press on condition of anonymity because the trade had not yet been announced by either team and was still pending NBA approval, which is not expected until Monday.
Justin Patton will also be sent to Philadelphia, and Jerryd Bayless and a 2022 second-round pick are also going to Minnesota, the person said.
The Athletic first reported the agreement.
Because the trade was not official, Sixers coach Brett Brown had little comment.
“I can’t speak much about it. I’m sorry,” he said before the Sixers played Memphis.
Sixers guard T.J. McConnell said he learned of the deal through social media.
“I didn’t think it was true until more reports started coming out,” McConnell said. “It’s kind of that feeling in your stomach of just like, I mean, you can’t really explain it. I was in disbelief.”
Philadelphia’s “Process” led it to the second round of the playoffs last season behind two of the game’s youngest, brightest stars in big man Joel Embiid and point guard Ben Simmons. Butler, an elite wing player and outstanding defender, will join them in a quest to rule the Eastern Conference now that LeBron James is out West with the Los Angeles Lakers following eight straight trips to the NBA Finals with Miami and Cleveland.
“I think they were a contender before,” James said, giving his reaction to the deal Saturday. “So it only enhances what they’re able to do. I mean, they’ve got Ben and Joel and now you’re adding Jimmy. I think that’s a very, very good team.”
The first order of business will be making the trade official, so Butler can debut for Philly either Monday at Miami or Wednesday at Orlando. The next step for Philadelphia will be coming to an agreement on an extension for Butler, a pending free agent who made clear to Minnesota that he would not be re-signing there in 2019.
Translated: The Wolves had to trade him, or they would lose him for nothing.
The drama has been constant from Butler’s first practice with the Wolves this season, and the team’s start while waiting for this inevitable move has been lousy. Minnesota finished a 0-5 road trip with a loss in Sacramento on Friday night and is 4-9 overall — winless in eight games on the road.
Butler played in 10 of those games, averaging 21.3 points. It was a peculiar arrangement; the Timberwolves were still running things through him often, even while the worst-kept secret in the NBA was that he wanted a change of address. Plenty of teams were mentioned along the way — Houston, the Los Angeles Clippers, Miami among them — as top candidates.
“I think him getting a fresh start on a team like ours will be beneficial to both sides,” McConnell said.
Butler, 29, has been an All-Star in each of the last four seasons. There are also concerns, though they clearly didn’t put off Philadelphia. Butler has missed at least 15 games in four of the last five seasons, including a career-high 23 games last year while dealing with a knee injury.
Philadelphia, who had just nine available players against the Grizzlies in part because of the pending move, will become Butler’s third team, after Chicago and Minnesota. He’s a career 16.5 point-per-game scorer, though that is skewed by his first two seasons, which were meager on the scoring front. He’s on pace this season to average at least 20 points for the fifth consecutive year.
“Welcome to the best sports city in America,” quarterback Carson Wentz of the Super Bowl champion Philadelphia Eagles tweeted to Butler.
Saric is in his third season and averaging 11.1 points, shooting only 36 percent. Covington had been a starter for Philadelphia for the bulk of the last four-plus seasons and is averaging 11.3 points per game this year.
Philadelphia and Minnesota don’t meet until Jan. 15. Butler’s return trip to Minnesota this season would be March 30, when he’s sure to be showered with boos from a Target Center crowd that jeered him at the beginning of the home opener before quickly letting up. Butler had 33 points on 10-for-12 shooting from the floor in 36 minutes that night against Cleveland, a reminder amid the drama why coach Tom Thibodeau was so eager to acquire him the year before.
Thibodeau swung a draft-night deal with Chicago that sent Zach LaVine, Kris Dunn and a first-round pick that became Lauri Markkanen to the Bulls for Butler and a later first-rounder Minnesota used on Patton. In the wake of that move, long-frustrated Wolves fans figured they were finally on their way to contending in the Western Conference for the first time since the Kevin Garnett era ended.
Paired with Karl-Anthony Towns and Andrew Wiggins, the first overall picks in the 2015 and 2014 drafts, respectively, Butler immediately provided the experience, tenacity and defense the Wolves were missing, in addition to his scoring touch. He loved playing for Thibodeau, his coach for his first five seasons with the Bulls, and they helped Minnesota get to the playoffs last spring for the first time in 14 years.
But the roster never truly meshed. And now, a new start awaits them all.
___
AP Basketball Writer Tim Reynolds in Miami, AP Sports Writer Dave Campbell in Minneapolis and freelancer Clay Bailey in Memphis, Tennessee, contributed to this report.
___
More AP NBA: https://apnews.com/NBA and https://twitter.com/AP_Sports