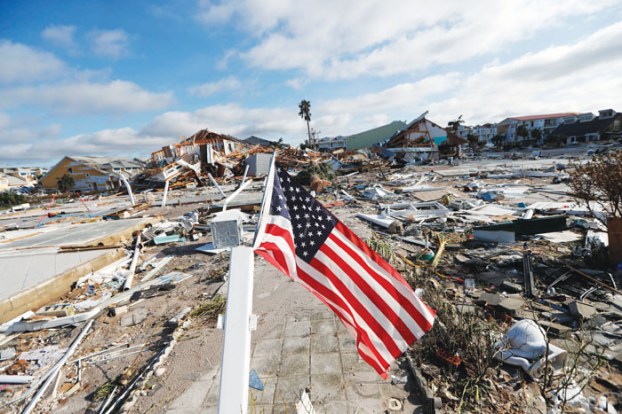 An American flag flies amid the destruction in the aftermath of Hurricane Michael in Mexico Beach, Fla., in October. Gerald Herbert/Associated Press

After being locked out of power for the past two years, Democrats won a seat at the table in the midterm elections by taking control of the House of Representatives.

But what should the new Democratic majority focus on? During the past few years, I have been writing about middle-of-the-road issues where there are signs of consensus — issues with significant economic and market implications that make good policy for the entire country.

In order of how much bipartisan support these might get, let’s consider these legislative agenda items:

• Infrastructure: We have discussed this repeatedly. Is anything more of a legislative no-brainer than repairing and modernizing the nation’s decrepit roads, bridges, tunnels, airports and electrical grid? This would act as a stimulus in the form of helping the construction industry, which lags behind the rest of the economy. A simple infrastructure tax should have been included in the corporate tax reform, but that was an opportunity missed. It’s worth noting that President Donald Trump has expressed support for a higher federal fuel tax to help pay for infrastructure updates.

Infrastructure has overwhelming public support, broad appeal and benefits that span the partisan divide. If this can’t get accomplished, then nothing else is likely to occur during the next two years.

• National minimum wage: The minimum wage debate is over, and the results are undeniable: modest, gradual increases benefit both employees and the local economy. The federal minimum wage of $7.25 an hour has been fixed since 2009, and is overdue for an update.

Here is the tricky part: wage levels are a local phenomenon. The economy in Seattle is very different from the economy in Sioux Falls, Iowa. The idea of a $15 national minimum wage simply isn’t feasible.

However, that doesn’t mean that the lowest-paid workers in the country couldn’t stand for some relief. A better course is to raise the minimum wage to $11 an hour over the next seven years in 75 cent increments. It is still barely a subsistence-level wage, but it would greatly improve the lives of those who earn the least. Let those who choose to vote against it do so.

• Fiduciary rule: Another area where Congress and the White House are out of step with the times. As mandated by the Dodd-Frank Act of 2010, a study was commissioned by the Securities and Exchange Commission that looked at the state of the brokerage industry. That report recommended a uniform fiduciary rule for all investors, shifting the standard from “suitability” to “best interest of the clients.”

Although much of the industry objected, and the Trump administration has expressed opposition to this standard, the toothpaste is out of the tube already. Investors have been slowly transferring assets from brokers and their suitability standard toward registered investment advisors and their fiduciary standard.

Regardless, the relationship between investors and the folks who manage their investments and retirement accounts should be more akin to a lawyer or an accountant, and not a used-car salesman. There is still much residual anger at Wall Street due to the financial crisis and bailouts. This is a winning position for the industry and investors.

• Climate change: Here is an amazing factoid: The GOP is the only major political party in the world that denies climate change. Large donors with interests in carbon-based energy, such as the Koch Brothers, and Trump’s bizarre obsession with coal are only two of the reasons why.

I have exhorted investors to ignore the agnotology and recognize the shift that manmade global warming is causing in their investment portfolios. It’s more than a talking point: real estate, energy, insurance (and re-insurance) leisure and hospitality, transportation, manufacturing are all undergoing major transformations courtesy of climate change. And, it’s going to become a bigger issue, especially in places like Florida, where Republicans hold most of the political power.The hope for a big infrastructure bill springs eternal, and maybe something will happen this time. The rest of the issues have some measure of crossover appeal, too. Moreover, they are well regarded by the Democratic base. These four agenda items could even act as test cases heading into the 2020 election. When the new Congress convenes on Jan. 3, here’s hoping they give these due consideration.

Barry Ritholtz is a Bloomberg Opinion columnist. He founded Ritholtz Wealth Management and was chief executive and director of equity research at FusionIQ, a quantitative research firm. He is the author of “Bailout Nation.”

Cal Thomas: Will Democrats seize the moment, or vice versa?

We are about to find out whether Democrats meant it when they lamented the loss of civility in Washington. Having... read more