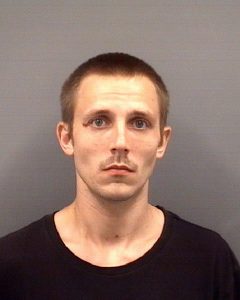 KANNAPOLIS — Michael Timothy Battle, 33, who was wanted in an Oct. 14 knife assault at 100 Thunder Road in China Grove, was arrested Monday.

Battle is charged with felony assault with a deadly weapon inflicting serious injury with intent to kill; robbery with a dangerous weapon; and second-degree kidnapping.

Officers from the Kannapolis and Concord police departments and the Cabarrus County Sheriff’s Office as well as an N.C. Highway Patrol helicopter crew joined detectives at the Walmart on Dale Earnhardt Boulevard.

After a brief search of the area, a Cabarrus County deputy found Battle in his vehicle parked at an apartment complex behind the Academy Sports store. Battle was arrested and returned to Rowan County. He was jailed with no bond.

Battle was implicated in an assault on a 28-year-old woman who suffered several stab wounds, including an injury to her neck. The victim’s cellphone and cash were taken when her attacker fled the scene.

The woman was transported to Carolinas Medical Center Northeast in Concord and treated for serious stab wounds.

Deputies were unable to locate Battle on the night of the assault.

The next day, officers with the Cornelius Police Department identified Battle as the driver of a suspicious vehicle in a store parking lot. Battle fled the parking lot in his vehicle with Cornelius officers in pursuit, and he eluded arrest after a brief chase.

Cornelius police obtained arrest warrants for Battle on charges related to the chase.

He is also wanted for failure to pay child support.