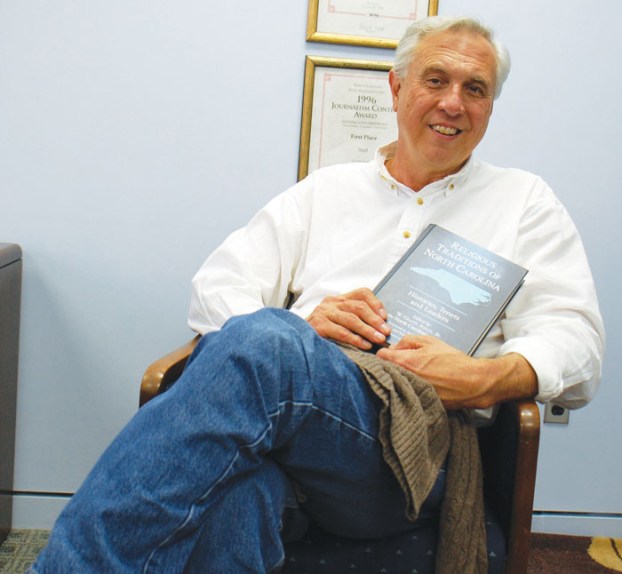 Gary Freeze, the William R. Weaver Professor of Humanities at Catawba College, holds the recently published book, 'Religious Traditions of North Carolina," to which he contributed an essay on Lutheranism. Freeze will be speaking about St. John's Lutheran Church, Germans and Lutherans in general tonight at an invitation-only patrons party at Rowan Museum and at 6:30 Sunday night in the Faith Center at St. John's. Mark Wineka/Salisbury Post

SALISBURY — St. John’s Lutheran Church has usually traced its beginning to 1747, when German settlers were meeting in various homes in Rowan County for worship.

Indeed, the church celebrated its 250th anniversary in 1997.

But this year marks another significant 250th benchmark in the church’s history. On Sept. 9, 1768, John Lewis Beard deeded land to the “Evangelical Lutheran Congregation in the township of Salisbury.”

That land, where the Old Lutheran Cemetery on North Lee Street is today, soon had a log structure that became the congregation’s first official sanctuary.

As part of Reformation Sunday, St. John’s Lutheran Church, 200 W. Innes St., will have a program on the history behind the deed led by Gary Freeze, the William R. Weaver Professor of Humanities at Catawba College.

The program will be held at 6:30 p.m. Sunday in the church’s Faith Center. The original deed will be on display, and a five-minute video will debut as the first digital exhibit in what will become the St. John’s Museum.

Other artifacts, including a Bible used by Salisbury’s early Lutherans, also can be seen.

Freeze actually is taking part in two programs over the next few days about the St. John’s deed, Germans and Lutheranism in early Rowan County.

Tonight, Freeze will be the guest speaker at the invitation-only patrons party in conjunction with this Saturday’s Germanfest at the Old Stone House in Granite Quarry. The patrons dinner is at the Rowan Museum.

Freeze says he will talk about 1768 from two perspectives. Tonight, he looks at this time through the eyes of Michael Braun, a Rowan County wheelwright and original builder/owner of the Old Stone House.

Sunday night, he looks at things from the perspective of Beard.

“There will be some overlap, but not a lot,” Freeze says. “The topics are very akin to each other.”

In fact, Braun (whose name became “Brown”) was listed in the deed as a trustee of the church, along with Michael More, Caspar Guenther and Peter Reeb, men who present-day senior pastor Rhodes Woolly says could be distinguished as the first members of St. John’s Church Council.

In a recent blog Woolly wrote for his church, he notes that the 1760s “were loaded with politics and positioning and threat of war.”

“The French and Indians, the British, a king’s mandate, the proprietors of present-day Salisbury, and even a young man named Daniel Boone all had something to do with this land deed,” Woolly says.

And it will be many of those kinds of things Freeze will talk about Sunday night in connection with Beard and his deed to the Lutherans.

Beard’s reasons for conveying the land for a church — Salisbury’s first — were both personal and community-minded.

Woolly says Beard faced a dilemma in 1768. His daughter had died and been buried on his property in Salisbury township. “But Salisbury was growing,” Woolly says, “and there was great concern that this hallowed ground might be disturbed by the march of civilization.”

So deeding the land to the building-less Lutheran congregation seemed like a solution for Beard to preserve his daughter’s grave for the long term.

But there was more to the story as both Woolly and Freeze suggest. Freeze sees the timing of the deed in September 1768 as important in Beard’s efforts to promote the interests of Salisbury’s German residents within the context of these often turbulent, untrusting times.

He promises he will explain the political and denominational connections Sunday evening.

Woolly and Freeze note that Beard’s deed to the Lutherans also grants use of the church building to come to “the High Church of England (later, the Episcopalians) and to “the Reformed Calvin ministers,” who would be called Presbyterians.

So it was a church to be shared by Anglicans and Lutherans, according to Beard’s wishes.

Freeze says the 1768 deed had never been reviewed or analyzed within the context of history. Through the years, the Lutheran pastors who wrote the church’s story tended to minimize the context and not delve into the conflicts of the day.

“We’re trotting out the deed,” Freeze promises of Sunday evening’s presentation. ‘The deed will be on display.”

Freeze also is doing a Faith moment at every service Sunday connected to the deed history. The Sunday evening program will serve as an inauguration of sorts for a St. John’s museum, which Freeze says is mostly in the planning stages.

As for St. John’s church building history, the congregation joined Episcopalians in erecting a church on the same North Lee Street site in the early 1800s. That church was used until 1857, when the St. John’s congregation moved to a bigger space at North Main and Liberty streets.

The first worship service in a 900-seat sanctuary at 200 W. Innes St. came on Jan. 2, 1927. By the mid-1950s, St. John’s boasted the largest Lutheran congregation between Washington and Atlanta.

The buildings on campus have gone through several improvements and expansions over the years, with the latest being the Sept. 12, 2015, dedication of the Faith Center.

GRANITE QUARRY — As they settled the New World, Europeans brought honey bees and beekeeping skills with them. Some records... read more