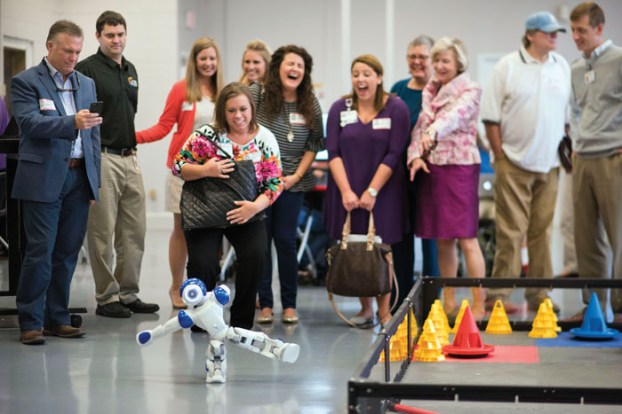 NAO, a voice-activated robot performs some tia chi movements as a demonstration of technology during the open house. The Rowan County Chamber of Commerce and Salisbury High School hosted a open house ceremony for the new Engineering and Advanced Manufacturing Center at the high school on Wednesday afternoon. Jon C. Lakey/Salisbury Post

Against the tax cap: Consequences could be costly

Proponents claim that lowering the cap on the income tax rate in the Constitution is necessary to hold down spending and put more money in the pockets of North Carolina taxpayers. However, an analysis of these claims and the proposal to set the maximum income tax rate allowable in the state constitution finds that:

Millionaires are the primary beneficiaries when the income tax rate is not allowed to go above 7 percent. The top 1 percent of taxpayers receive more than half of the total next tax cut from a 7 percent maximum income tax rate when compared to what would be possible with a graduated rate structure with brackets on higher incomes.

Fewer dollars are available to make critical, transformative investments in our state. A graduated rate structure that taxes income above certain income thresholds at rates above 7 percent, like what was in place during the 2001-2006 period, would provide an estimated $2.4 billion in state revenue. Those dollars would allow North Carolina to get teacher pay to the national average and make investments in our children’s education by funding textbooks, classroom supplies, and technology.

Middle- and low-income taxpayers will see their tax load increase. Research has shown that tax limits do little to ensure that taxes are held down. Instead, policymakers often raise taxes such as sales and property taxes to meet identified needs in communities. Raising the $2.4 billion in revenue that would be available under a graduated rate structure through the sales tax — which asks more of low- and middle-income taxpayers — would require the sales tax rate to increase from 4.75 percent to 6.29 percent. Under a sales tax change, the poorest taxpayers would see a 0.9 percent change in their taxes as a percent of their income versus just a 0.1 percent for those at the top — while under a graduated income tax proposal, anyone making less than $60,000 would experience no tax change.

Reaching the full economic potential of the state is blocked when the state underinvests in opportunity for all and delivers tax cuts to the wealthy few. One of the state’s persistent economic challenges is that job growth has been uneven and barriers to opportunity remain, particularly for communities of color and rural places. These barriers are made worse and continue to compound over time when state investments are arbitrarily capped. By not ensuring that children from every background have access to a sound, basic education, North Carolina is missing the economic boost that is possible when every person in the state — regardless of race or ethnicity — is able to achieve their full potential.

Limits on state revenue will put pressure on local budgets and lead to increases in local taxes like the property tax. As local policymakers contend with fewer state dollars to support local needs, many counties will face greater difficulty in meeting local needs. The result will require local leaders to either cut services or raise property taxes. Since 2012-13, 74 counties have raised their property tax rates and many have also revalued properties in their local jurisdictions.

Letters of endorsement regarding the Nov. 6 election should be received at the Salisbury Post by 5 p.m. Wednesday, Oct.... read more