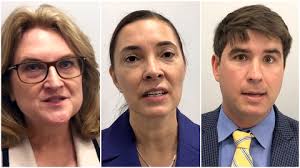 Incumbent N.C. Supreme Court Justice Barbara Jackson is probably going to lose her seat, and her own political party is at fault.

In a normal year, Jackson would benefit from her experience — she’s a well-respected judge who’s been in office for eight years. She’d likely be in a tight, one-on-one race with a Democrat.

But Jackson’s fellow Republicans in the legislature decided to change the rules of the game this year, canceling the primary that would have crowned a single candidate from each party. They claimed the cancellation was needed because lawmakers were still tweaking district lines for local judges. That redistricting wouldn’t have impacted Supreme Court and Court of Appeals candidates who run statewide, but their primaries got canceled too.

This move initially seemed like an effective, if sneaky, scheme to help Jackson. Few Republicans would challenge their party’s incumbent, while multiple Democrats would be eager for a shot at the state’s highest court. If five Democrats and only one or two Republicans were on the ballot, Jackson would surely win.

That scenario didn’t happen. Democrats out-maneuvered the GOP, quickly anointing Anita Earls as their party’s preferred candidate. As the leader of the Southern Coalition for Social Justice, her often-successful lawsuits over gerrymandering and other Republican laws have made her a heroine on the left.

Other Democrats realized that running against her would be a waste of time and money, so even the efforts of a GOP-aligned dark money group to recruit more Democratic candidates failed.

Enter Chris Anglin, a little-known Raleigh attorney. Shortly after the primary was canceled, the registered Democrat became a registered Republican. He filed to run for Supreme Court, with help from longtime Democratic consultant Perry Woods. Neither Anglin nor Woods have been willing to say who — if anyone — recruited him.

Republican legislators tried to correct their mistake by passing a law to remove the Republican label from Anglin’s name on the ballot. But that law was thrown out in court, and now voters will see two Republicans on the ballot.

GOP leaders are doing their best to bash Anglin. He’s been labeled the “enemy.” Rep. David Lewis, R-Harnett, tweeted that he’s “a completely incompetent candidate who can’t even tie his tie.”

Unfortunately for Republicans, a lot of voters aren’t hearing the message. They’re not paying attention to judicial races, and they’ll be confused when they encounter two listed “Republicans” on the ballot.

A recent Spectrum News/SurveyUSA poll showed Anglin actually leading Jackson (22 percent to 15 percent) as they split the GOP vote and trail Earls (43 percent). It’s not that voters prefer Anglin over Jackson. It’s just that when voters have to make a quick decision between two names with no other information, some will choose a man’s name over a woman.

Jackson’s campaign is working hard to establish her as the real Republican in the race. Gone are the generic jingles from past campaigns about being a “fair judge.” Instead, her ads urge voters to “stop the liberals” and their immigration agenda.

So much for being a “fair judge” who stays above the political fray. The liberal-bashing calls Jackson’s impartiality into question. But Earls’ history with the Southern Coalition for Social Justice — which will continue to have frequent cases before the N.C. Supreme Court — could also create a conflict of interest, or at least a perceived one.

Republican legislators made Supreme Court races partisan, so it’s no surprise the court might become more political. That shift could erode North Carolinians’ faith in the court, but it will mostly be the GOP crying foul.

A victory for Earls will mean Democrats will have a 5-2 majority on the court through at least 2022. Thanks to their botched efforts to tilt the scales in favor of Jackson, Republicans will have only themselves to blame.

Campbell is editor of the Insider State Government News Service. Write to him at ccampbell@ncinsider.com.