Man up, Morgan — papa papoose is a good thing 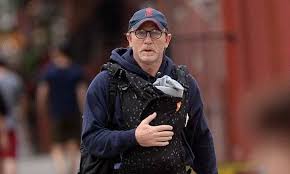 Daniel Craig carries one of his children in a baby carrier.

It wasn’t the photo itself that got people riled up. It was Morgan’s hashtag-style commentary about Craig’s “papoose,” an adopted Native American word used in Britain for a child carrier: “#emasculatedBond.”

The response was swift and severe: The British provocateur was widely criticized for his skewed image of manhood, in which he claimed that Craig’s choice of parenting gear was a sign of emasculation rather than practicality.

“You really have to be so uncertain of your own masculinity to concern yourself with how another man carries his child,” Hollywood star Chris Evans wrote. “Any man who wastes time quantifying masculinity is terrified on the inside.”

Some users responded by calling Morgan  “insecure manbaby” and worse.

Others attempted a more rational approach by explaining the benefits of baby carriers, which allow parents to keep children close, yet have their hands unoccupied while strolling on the street.

“There is nothing more masculine than a Father taking an active role in nurturing and looking after his child,” another user wrote. “About time more in the media celebrated this, I mean aren’t you right-wing oddballs always bleating on about lack of family values?”

Still others wrote that a father taking care of his child, even wearing a carrier, is attractive.

Craig is not the first Bond actor to be photographed carrying his child, as at least one Twitter user pointed out. And a handful of men responded with photos of themselves wearing baby carriers.

It’s not newsworthy to see that many men are engaged partners in parenting. They change diapers and handle late-night whimpers. They strap babies to their chests and go about the day’s business, too. They’re part of a generation whose mothers and fathers embrace their nurturing side and share the workload at home.

Morgan could not be reached for comment; neither could Craig, who recently welcomed his daughter with actress Rachel Weisz to the world.

But Morgan, a father himself, did not stand down or waffle; he maintained that papooses are “ridiculous instruments of emasculation.”

He defended his honor on Twitter, turning the backlash he had spawned into “Good Morning Britain” content.

And, of course, there were more troll-y tweets.

Calling the tweet-lashing a “ferocious Papoose-gate debate,” Morgan also ventured that there must be a change in James Bond casting.

Clearly, he said, the world needs a “007 who looks sharp in a tux & wouldn’t be seen dead in a papoose.”

Naturally, he nominated himself.

Deanna Paul covers national and breaking news for The Washington Post. Before joining The Post, she spent six years as a New York City prosecutor.