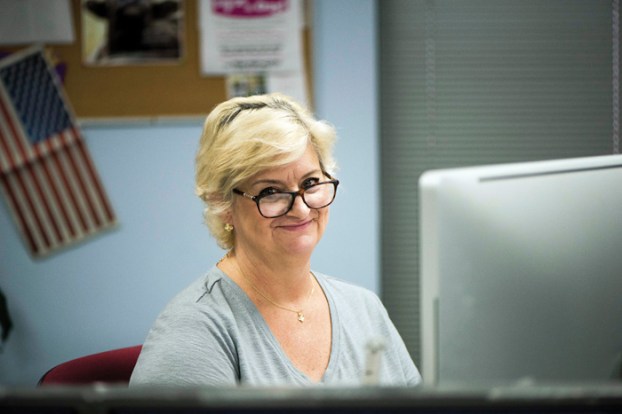 SALISBURY — Sharon Earnhardt Jackson has always been a multi-tasker.

At the Salisbury Post, she seemed to do everything — answer the phone, serve customers, design and lay out advertising pages, manage departments, train software users and handle sponsorships.

“I just always wanted to know everything there was about the process,” Jackson says.

She laughs, remembering a day she persuaded the guys in the pressroom to allow her to punch the button for a day’s run.

“It’s exciting hearing that thing start up,” she says.

Early in her career at the newspaper, a co-worker told Jackson, maybe as a warning, that, “If you stay here too long, you’ll get ink in your blood and you’ll never leave.”

Jackson pauses for a beat.

Today, Sharon Jackson will bring to a close a 44-year, three-month tenure at the Salisbury Post. The years saw her go from a teenage typesetter to the classified advertising and creative services manager, not to mention production director for Salisbury the Magazine.

Post Publisher Greg Anderson says working with Jackson has been a pleasure.

“We will miss Sharon’s contributions to this local newspaper and, especially, we will miss working beside her,” he says.

“Over the years, as duties and responsibilities of employees have increased, Sharon has set the multi-tasking example,” Anderson says. “Sharon’s knowledge of systems, design skills, sales management and overall leadership have been a great value to this newspaper.”

In retirement, Jackson plans to travel a lot and tick things off her bucket list, such as going on a hot-air balloon ride. She recently sold her house near Granite Quarry and moved to Winston-Salem to be closer to her friend since high school, Cheryl Dobbins of Pfafftown.

Jackson bought a new townhouse, and she thinks she will flex her considerable interior design muscles. “I just like to create stuff,” she says.

Jackson acknowledges she will not miss the constant deadlines of newspapers and magazines, or trying to meet the bottom lines of budgets. She won’t miss the commute from Winston-Salem.

The past year also has been difficult with the death of her mother.

Jackson expects to return to the Post on occasion to help with some jobs here and there. She says the newspaper isn’t locking her out completely.

“Throughout those years,” Humphrey says, “our department moved and shifted, as well as her position. But she remained smart, creative, funny and hard-working.

“After working together for so long, we have so many inside jokes and memories, plus Sharon has a wealth of knowledge that we will never be able to replace.”

Jackson has lived through vast changes at the newspaper and the way it is produced. She also has seen the newspaper change ownership twice.

After graduating in 1974 from North Rowan High School, Jackson married, then came to the Post to fill in for a woman on maternity leave. She was hired on permanently, starting as a typesetter, typing stories from reporters onto punch tape.

The composing room back then included at least 25 people. There were proofreaders, and advertisements were first sketched out using pencils and rulers. Jackson says it was a busy, bustling place — the newsroom and composing room — and it mirrored how busy downtown Salisbury was back then.

Jackson credits a high school teacher, Julie Pinkston, for seeing something in her and encouraging her to run for business class president, an office she won.

“I always wanted to thank her,” Jackson says. “It helped me have confidence in what I was doing.”

Within three years, Jackson was designing ads, again because she loved the creative process. In the next year, she started a family.

As the years went by, Jackson says she was probably a bit naive, always looking to have more responsibility. Everything she learned, she absorbed by doing it. The Post also sent her for training, as things changed with computers and software.

Jackson took her first airplane trip ever by flying to Utah for training. She thoroughly enjoyed attending a newspaper design conference in Miami. She eventually became assistant manager in the composing room, then its manager.

There was even a brief time that she was the paper’s data systems manager, responsible for all the building’s computers.

Deirdre Parker Smith of the Post staff says Jackson has been a vital cog at the newspaper.
“She has gotten us through numerous changes in our operating system,” Smith says. “She helped to redesign the Salisbury Post. She used her amazing creative talents on everything from ads to news pages to special sections.
“There’s no one else like her, and we are really, really going to miss her, as a co-worker and as a friend.”

In recent years, Jackson has become highly proficient in Brainworks and has traveled to other properties in the Boone Newspapers chain to help install the software or provide training.

“It was always fun,” Jackson says of whatever she was doing. “Nothing was ever the same.”

Jackson has two grown children and a 15-year-old grandson.

Today, Jackson’s colleagues will celebrate her career and retirement at lunch. For her, the 44-plus years at the Post flew by.

“I always thought I would retire from here,” Jackson says. “I just didn’t think it would come so soon.”

SALISBURY — The October issue of Salisbury the Magazine, a publication of the Salisbury Post, has reached subscribers and is... read more