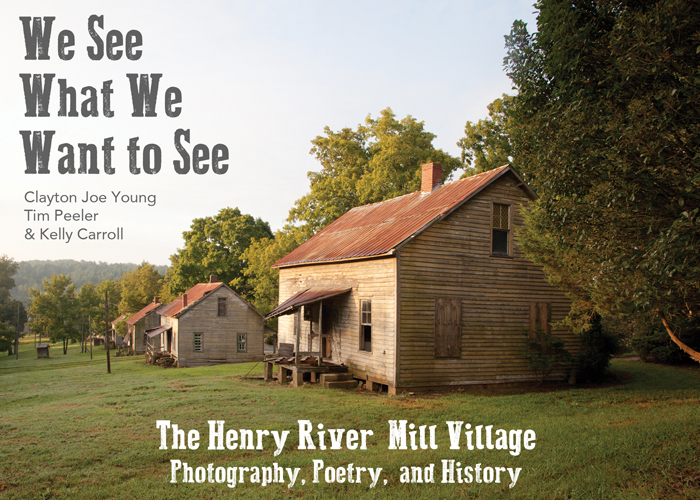 Book cover for “We See What We Want to See,” co-authored by Peeler, Young, and Kelly Carroll.

NC History series kicks off Monday
CHINA GROVE — Rowan Public Library’s South branch, 920 Kimball Road, kicks off its North Carolina History series on Sept. 24 with a program about the Henry River Mill Village. The program, led by Tim Peeler and Clayton Joe Young, will begin at 7 p.m.
The Henry River Mill Village, located in Burke County, was abandoned in 1987, though it gained new attention as the setting for District 12 in the 2012 film “The Hunger Games.” Then-owner Wade Sheppard began allowing the public to visit the Village.
Young, a photographer, was working on a project about textile mills and visited during a reunion and photographed many of the previous tenants. At the event, he ran into Peeler, who is a writer and they began discussing a possible collaboration. The book “We See What We Want to See” was the result. 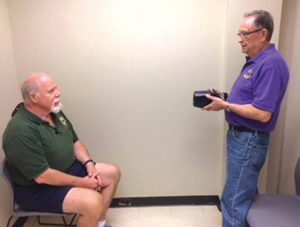 Submitted photo
Don Conner (right), chairman of the SPOT Camera Committee, conducts an eye test on a subject. There is no contact and this is as close as the camera ever gets. It takes just seconds to scan, evaluate and generate a printed report.

Lions vision screening
On Sept. 13 the Salisbury Lions Club participated in a health fair at Rowan-Cabarrus Community College. Utilizing the club’s recently acquired high tech SPOT Vision Screener, more than 50 faculty and students were screened. A handful were recommended to have professional evaluation.
By simply looking into the screener, nearsightedness, farsightedness, astigmatism and several other potential problems can be detected within seconds.
This is a valuable tool for screening small children, for instance, because they do not have to read or recognize shapes as they would using the standard eye-chart testing method.
If you have a group of any age that might benefit from such a screening, message the club on Facebook, “Salisbury NC Lions Club” at https://www.facebook.com/SalisburyNCLions/

Open forum with candidates
The Rowan County Tea Party will gather on Tuesday, Sept. 25 at 6:30 p.m. for dinner at the BlueBay on Statesville Blvd., followed by an open forum with Carl Ford, candidate for the NC Senate; and Julia Howard, Larry Pittman and Harry Warren, candidates for the NC House of Representatives.

Rowan Redbuds
The Rowan Redbuds Garden Club will meet Sept. 27 at 1 p.m. in the Stanback Room at Rowan Public Library, 201 W. Fisher St. Caleb Sinclair, Environmental Management Director for the City of Salisbury, will present a program on recycling.

Hampden has 2 poetry books and a journal