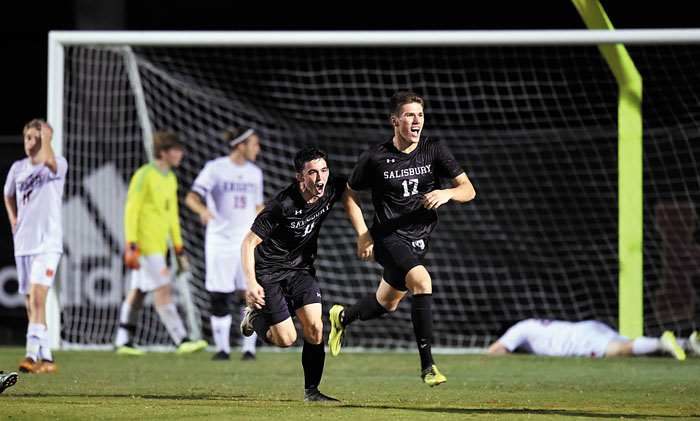 The Hornets rode the elevator to the top floor Wednesday night at Ludwig Stadium, where they posted a 2-1 overtime victory over previously unbeaten North Davidson.

“What I think is this conference is really, really tough,” winning coach Matt Parrish exhaled after Salisbury (10-2, 6-1) prevailed in a frantic, 90-minute affair. “And sometimes being in that one place, that one time and making that one play can make all the difference in a game or your entire season. I know it’s sounds like coach-speak, but sometimes it’s true.”

Against North Davidson (8-1, 5-1 CCC) — a team ranked as high as fifth in the state in one pre-season poll — that one moment arrived with 1:11 remaining in the second OT period. Defender Jack Fisher, a senior who helped anchor Salisbury’s rigid back line, tallied the decisive goal on a 12-yard header off a slow-bending corner kick by teammate Bryan Garcia-Cortez.

“I was back post,” Fisher said, who stationed himself inside the penalty area on the left side. “When the ball came through, instead of trying for the near side, I headed it back across to the far post. Just a little thing, but it paid off.”

Fisher’s second goal of the year may have fooled opposing keeper Cain Pfost, who left the far side of the net unprotected. It capped a mid-season statement game with an Salisbury exclamation mark.

“Somebody made a great play,” said North Davidson coach Scott Beckom. “Those things happen in soccer.”

“It had a lot of movement, but I saw it all the way,” Faulkner reported. “Our whole defense was phenomenal tonight. Sometimes they’re the biggest reason we score goals and get leads.”

Salisbury — fourth in the conference following a sluggish start last season — never trailed in this one. The Hornets jumped ahead 1-0 just 5:13 into the match, when Hugo Trujillo gathered a pass from Fisher and clanked a hard shot off the right post that settled behind Pfost.

“I didn’t get to it right away,” Trujillo said after netting his third goal. “It passed through some people and was bouncing around the six-yard box. All of a sudden I knocked it out of the air.”

Salisbury dominated the remainder of the first half, peppering seven shots on frame but converting only once. That didn’t sit well with Beckom, whose team posted five shutouts in its first eight matches.

“We were outplayed in the first half,” he said. “It seemed like we were always defending something dangerous. And I would have liked for us to possess the ball more instead of playing so many long balls. But at halftime, we didn’t yell at anyone over it. We just discussed what we were doing wrong and suggested ways to correct it.”

The answer came 33 seconds into the second half. North abruptly tied the score when junior forward Adrian Solano charged toward the net and blasted a 15-yard shot past Faulkner into the left side.

“My other center halfback (Luke Holland) got hurt on the play,” said Fisher. “Someone stepped on his ankle. He was on the ground near midfield. I looked around and didn’t have any back-up.”

Odd as it sounds, the blunder may have been another defining moment. “Well, it woke us up,” said Trujillo. “We may have come out for the second half a little too confident. Right then, we knew it wasn’t going to be handed to us.”

Fisher had the only shot-on-goal in the first overtime, curling a banana kick from the left side that Pfost alertly paddled away. And in the second OT, Wiles ripped a shot that cleared Faulkner’s outstretched arms and sailed over the crossbar. Then came Fisher’s game-winner — on a time-tested set piece.

“We weren’t flawless from start to finish,” Faulkner said. “But we kept our heads in it and kept working. First place is a good accomplishment. Now we’ve got to work to stay there.”

NOTES: Salisbury can enjoy the view from atop the league standings, but can’t ignore those objects in the rearview mirror. They’re closer than they appear — North Davidson, Lexington (6-2) and Ledford (5-2) are all within a game of first place. … SHS held a 14-5 advantage in shots and an 11-1 edge in corners. Pfost, a freshman, made 12 saves. … North’s Nathan Davies and Salisbury’s Axel Alejo were shown yellow cards. So was Salisbury assistant coach Taylor Strode, who was booked for expressing an unpopular opinion. …The Hornets visit East Davidson at 6 p.m. today in a match rescheduled from Monday.