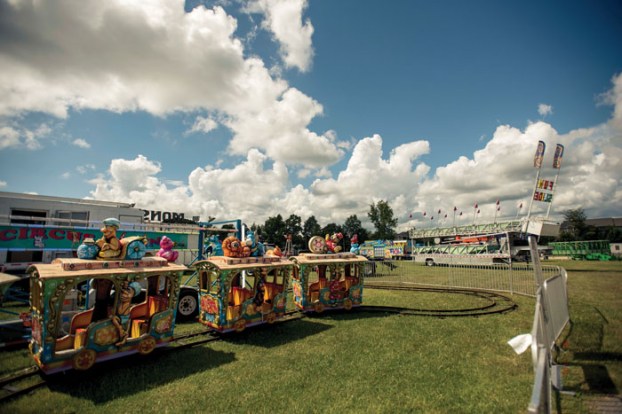 Some of the rides from Powers and Thomas Entertainment have been set up while others are in place but not erected for the Rowan County Fair. Jon C. Lakey/Salisbury Post

UPDATE: Due to high winds and rain moving in, the fair is canceled for Friday night. Officials plan to open as soon as weather permits, with updates being posted to Facebook.

Everything will still run on schedule, he said – weather permitting.

“If it’s like it is today, we will probably open,” Love said Thursday. “If it’s windy and being nasty, we probably won’t.”

Love said organizers will make a call by noon today about the fair’s opening, depending on the effects of Hurricane Florence.

The fair was scheduled to open at 5 p.m. today.

Setup began earlier this week. If the fair opens today, only four out of 25 rides would be out of service until tropical storm-force winds pass by.

Those rides are the ones over 35 feet tall, such as the Ferris wheel, pirate ship and “Speed,” a large, 4G ride.

If the storm passes quickly, those four rides could be operating as soon as Sunday.

“The North Carolina inspector said they would come back even on Sunday so we could get those rides open,” Love said.

For now, Love said fair officials are waiting for updated forecasts to make a decision about this evening’s opening.

Any cancellations or changes would be announced on the Rowan County Fair Facebook page.

Admission to the fair is $6, and parking is free.

Fair worker Randall Barger said there are 300 parking spots in front of the fair, with a new parking lot in the arena area for more than 500 cars this year.

Parking is also available between the new James River building and Rowan County Animal Shelter, near Old Concord Road at the Agricultural Building and in front of the bus garage, he said.

Tram and golf cart rides to the gate will be available.