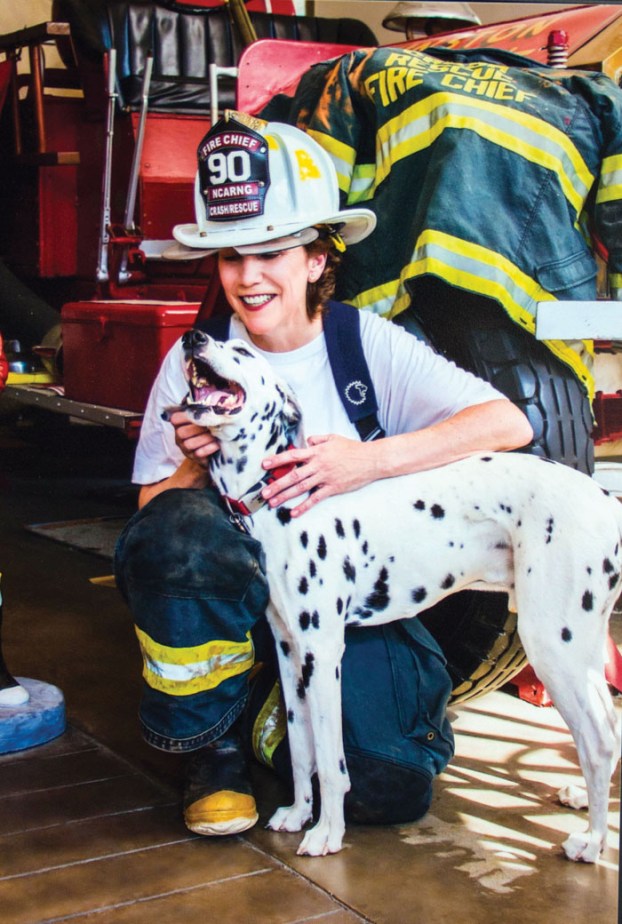 SALISBURY — After serving in the Air Force and North Carolina Air National Guard and as a firefighter in Rowan County for nearly 31 years, Crystal Pierce has retired from a career of protecting her community.

Pierce graduated from North Rowan High School and joined the Air Force in radio communications. She was on active duty for two years before joining the Air National Guard. After her time in the military, Pierce put her communications background to use as a production assistant at Channel 12 WXII in Winston-Salem, but she knew she wanted a change in career.

Thanks to Millers Ferry Fire Chief Bobby Fox, a firefighter at the Salisbury Fire Department at the time, she found the change she was looking for. A conversation with Fox at a close friend’s gathering opened a door to the career Pierce would come to love.

“I always loved watching ‘Emergency!’ but it wasn’t something I was inspired to do because there were no women in it other than the nurses,” Pierce said about her interest in firefighting.

It wasn’t until she had joined the Salisbury Fire Department that she developed a love for firefighting. While there weren’t women in emergency-response roles during Pierce’s childhood, “Station 19,” an ABC series that premiered earlier this year, features TV’s first female firefighting lead role.

Pierce was promoted from fire control specialist to become the first woman engineer at the Salisbury Fire Department in mid-1993. In late 1995, she became the department’s first female captain.

Pierce’s presence was groundbreaking for women in a predominantly male profession, but in the eyes of her co-workers, it wasn’t a big deal.

Firefighting has a structured rank system similar to that of the Air Force. Pierce says her military background helped her “greatly because there is a structure and rank to firefighting” that she was already familiar with going into the job. Pierce says that as a rookie, she earned respect from co-workers by following orders and “just doing what’s asked” of her. Gender had no role.

“You have to understand, you’re given this order, and you’re talking about split-second decisions, life-and-death situations, and you really have to have a discipline to listen, and a discipline to follow through with that order,” she said of the command hierarchy.

Since becoming a firefighter, Pierce has taught classes for the fire and emergency services program at Rowan-Cabarrus Community College, where she has seen more women looking to become firefighters. In 2000, Pierce moved from the Salisbury Fire Department to the Army National Guard Fire Department, becoming the first female fire chief in Rowan County, a position she held until retirement in July.

Firefighting has “saving lives” in the job description, but fighting fires has changed Pierce’s life as much as those of the people she’s helped.

“I feel like it gave me a greater compassion for people’s circumstances. I didn’t know, really, what I was getting into, I just thought it was fun. But the more situations I got into and the more circumstances I ran across, I saw it didn’t matter if we had a mansion that was on fire or an old mill house; it devastated people the same,” she said.

While she developed a greater compassion for people in need, she also gained “some of the closest friends and colleagues that I will ever know. You know, you hear about the brotherhood or the sisterhood, but you don’t realize how real it is. It’s a comforting feeling to know that you always have that support with you.”

Now that she has retired, Pierce has more time for her other passion: photography. As both an ambassador and photographer for the Salisbury-Rowan Senior Games, Pierce captures moments of participants in different activities.

In addition, she will soon move to the coast to enjoy living in a warm, year-round climate and also plans to travel to other parts of the country.

Schools to be closed Friday

SALISBURY — Rowan-Salisbury Schools will be closed Friday for all staff and students because of the threat of severe weather.... read more